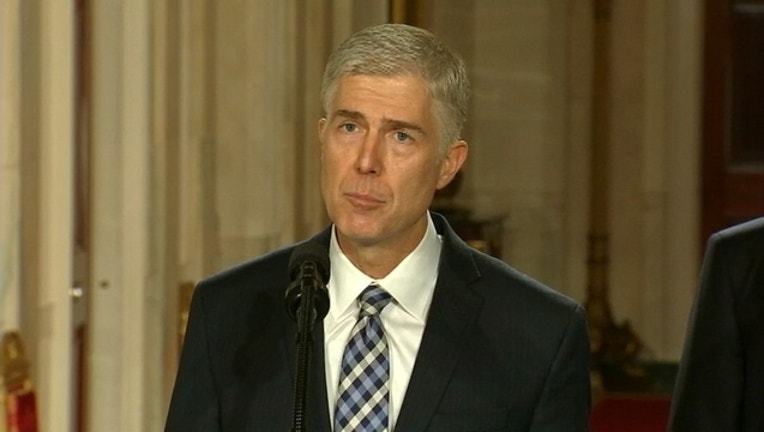 WASHINGTON (AP) - In a confrontation that could reshape the Supreme Court for generations, Republicans tore up the Senate's voting rules Thursday to allow Trump nominee Neil Gorsuch to ascend to the high court over furious Democratic objections.

Democrats denounced the GOP's use of what both sides dubbed the "nuclear option" to put Gorsuch on the court, calling it an epic power grab that would further corrode politics in Congress, the courts and the nation. Many Republicans bemoaned reaching that point, too, but they blamed Democrats for pushing them to it.

"We will sadly point to today as a turning point in the history of the Senate and the Supreme Court," declared Democratic Minority Leader Chuck Schumer of New York.

"This is going to be a chapter, a monumental event in the history of the Senate, not for the better but for the worse," warned Sen. Lindsey Graham of South Carolina, a senior Republican.

A final confirmation vote on Gorsuch is expected Friday, and he should be sworn in soon to hear the final cases of the term. He was nominated by President Donald Trump shortly after the January inauguration.

The Senate change, affecting how many votes a nominee needs for confirmation, will apply to all future Supreme Court candidates, likely ensuring more ideological justices chosen with no need for consultation with the minority party. Trump himself predicted to reporters aboard Air Force One that "there could be as many as four" Supreme Court vacancies for him to fill during his administration.

"In fact, under a certain scenario, there could even be more than that," Trump said. There is no way to know how many there will be, if any, but several justices are quite elderly.

Even as they united in indignation, lawmakers of both parties, pulled by fierce political forces from left and right, were unwilling to stop the confirmation rules change.

The maneuvering played out in a tense Senate chamber with most members in their seats, a rare and theatrical occurrence.

First Democrats tried to mount a filibuster in an effort to block Gorsuch by denying him the 60 votes needed to advance to a final vote. That was successful only briefly, as Gorsuch fell five votes short. Then Majority Leader Mitch McConnell, R-Ky., raised a point of order, suggesting that Supreme Court nominees should not be subjected to a 60-vote threshold but instead a simple majority in the 100-member Senate.

McConnell was overruled, but he appealed the ruling. And on that he prevailed on a 52-48 party-line vote. The 60-vote filibuster requirement on Supreme Court nominees was effectively gone, and with it the last vestige of bipartisanship on presidential nominees in an increasingly polarized Senate.

The developments were accompanied by unusually bitter accusations and counter-accusations. And yet in many ways the showdown had been pre-ordained, the final chapter in years of partisan warfare over judicial nominees.

In 2005, with the Senate under GOP control, Republicans prepared to utilize the "nuclear option" to remove the filibuster for lower-court nominees. A bipartisan deal at the time headed off that change. But then in 2013, with Democrats in charge and Republicans blocking President Barack Obama's nominees, the Democrats did take the step, removing the filibuster for all presidential appointments except the Supreme Court.

McConnell accused Democrats of forcing his hand by trying to filibuster a highly qualified nominee in Gorsuch, 49, a 10-year veteran of the 10th U.S. Circuit Court of Appeals in Denver with a consistently conservative record.

"This is the latest escalation in the left's never-ending judicial war, the most audacious yet, and it cannot and will not stand," McConnell said.

But Democrats were unable to pull back from the brink, partly because they remain livid over McConnell's decision last year to block Obama's Supreme Court nominee, Judge Merrick Garland, who was denied even a hearing after the death of Justice Antonin Scalia in February 2016. Instead McConnell kept Scalia's seat open, a calculation that is now paying off for Republicans and Trump.

Even as Graham and other senior Republicans lamented the voting change, McConnell and some allies argued that all they were doing was returning to a time, not long ago, when filibusters of judicial nominees were unusual, and it was virtually unheard-of to try to block a Supreme Court nominee in that fashion. Even Clarence Thomas got onto the court without a filibuster despite highly contentious confirmation hearings involving sexual harassment claims.

Some senators fear that the next to go could be the legislative filibuster, one of the last remaining mechanisms to force bipartisan cooperation on Capitol Hill. Republican Sen. Susan Collins of Maine and Democrat Chris Coons of Delaware were circulating a letter to colleagues Thursday in support of keeping the filibuster in place for legislation.

With his final vote set for Friday, Gorsuch counts 55 supporters: the 52 Republicans, along with three moderate Democrats from states that Trump won - Joe Manchin of West Virginia, Heidi Heitkamp of North Dakota and Joe Donnelly of Indiana. A fourth Senate Democrat, Michael Bennet from Gorsuch's home state of Colorado, refused to join in the filibuster Thursday but announced he would vote against Gorsuch's confirmation.