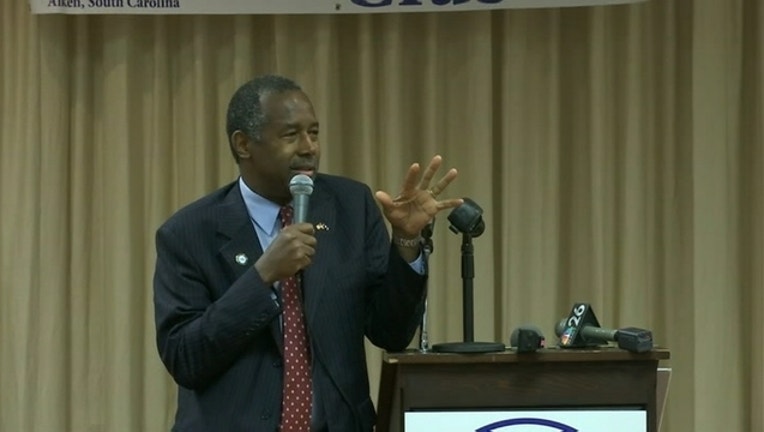 Carson told reporters in Ohio that his view is that anyone wanting to be president must embrace the Constitution and American principles. He added that he would oppose a Christian for president who wanted to establish a theocracy.

Asked how his campaign can recover from the controversy, the retired neurosurgeon replied: "The only way we fix that is fix the P.C. culture in our country," referring to political correctness.

"We fix America, and we get people who actually start listening .... and stop trying to fit everything into a P.C. model," he said.

Carson's remarks came amid a backlash over his comments last weekend that Muslims shouldn't serve in the presidency. In an interview with Fox News, Carson then retreated slightly, saying he would be open to a moderate Muslim who denounced radical Islam as a White House candidate. But he also said he stood by his original comments, saying the country cannot elect people "whose faith might interfere with carrying out the duties of the Constitution."

The Constitution clearly states "no religious test shall ever be required as a qualification to any office or public trust under the United States."

On Tuesday in Ohio, Carson called the Muslim president question "a theoretical issue" that's distracting from important national and international problems, from U.S. income inequality to the Syrian refugee crisis.

Carson's campaign estimated more than 2,000 supporters came to the Sharonville Convention Center, the first of his three appearances planned Tuesday in swing-state Ohio. Carson got strong cheers and applause for calling for action on the national debt and for strengthened border security to keep out "radical jihadists."

Jennifer Measel of Waynesville, Ohio, who was selling T-shirts to benefit Carson's campaign, said he "is resonating with everyone. He says what we're feeling."

Carson received a standing ovation later at Cedarville University, a Bible-based college near Dayton, when he said political progressives are leading this push for political correctness in an effort to stifle those who disagree with them.

"They don't even care if you agree with them as long as you sit down and shut up," he said to rousing applause.

Carson said Thomas Jefferson would "stroke out and die" if he saw how expansive the U.S. government has become. He urged evangelicals to use their personal "spheres of influence" to get family and friends to express their beliefs and to get out and vote.