Ghislaine Maxwell, an associate of Jeffrey Epstein, was convicted on 5 out of 6 charges. LiveNOW from FOX talks with a human trafficking expert on what this means for victims and future cases.

NEW YORK - A U.S. judge refused to throw out Ghislaine Maxwell’s sex trafficking conviction Friday, despite a juror’s failure to disclose before the trial began that he’d been a victim of childhood sexual abuse.

U.S. Judge Alison J. Nathan declined to order a new trial weeks after questioning the juror under oath in a New York courtroom about why he failed to disclose his personal history as an abuse survivor on a questionnaire during the jury selection process.

The juror had said he "skimmed way too fast" through the questionnaire and did not intentionally give the wrong answer to a question about sex abuse.

In an opinion certain to trigger a higher court appeal, Nathan said the juror’s failure to disclose his prior sexual abuse during the jury selection process was highly unfortunate, but not deliberate.

The judge also concluded the juror "harbored no bias toward the defendant and could serve as a fair and impartial juror."

Had the juror answered the questions correctly, Maxwell's lawyers had said they potentially could have objected to the man’s presence on the jury on the grounds that he might not be fair to a person accused of a similar crime. 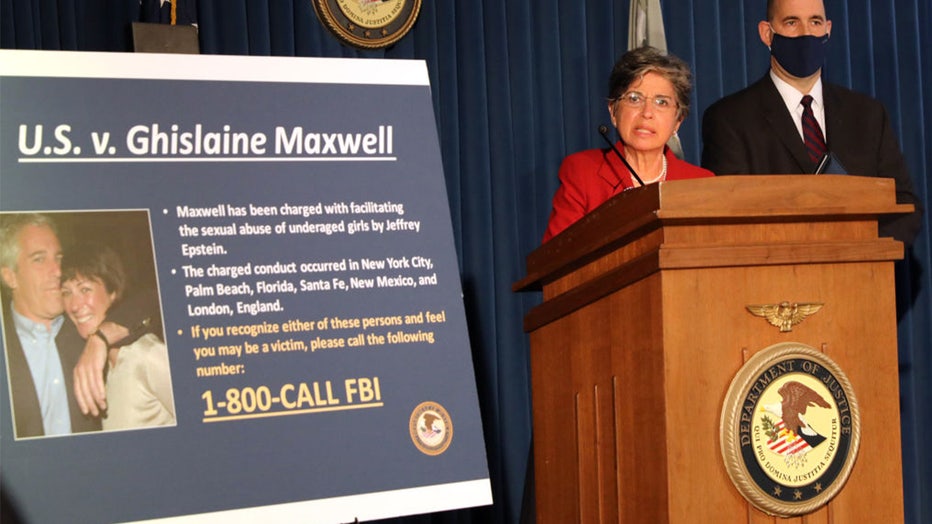 FILE - Acting United States Attorney for the Southern District of New York, Audrey Strauss, speaks to the media at a press conference to announce the arrest of Ghislaine Maxwell, the longtime girlfriend and accused accomplice of deceased accused sex-

Maxwell, 60, was convicted of sex trafficking and other charges after a monthlong trial that featured testimony from four women who said she played a role in setting them up for abuse by Epstein.

Epstein killed himself in August 2019 as he awaited trial at a federal jail in New York on related sex trafficking charges.

After the trial's conclusion, the juror, identified in court papers only as Juror No. 50, gave interviews with several media outlets describing deliberations, and disclosing that he’d been abused as a child. He said he persuaded some fellow jurors that a victim’s imperfect memory of abuse doesn’t mean it didn’t happen.

Potential jurors in the case had been were required to fill out a 50-page questionnaire including a question that asked: "Have you or a friend or family member ever been the victim of sexual harassment, sexual abuse, or sexual assault?"

The juror checked "No."

The juror said in one of the interviews that he didn’t remember being asked that question, which was No. 48 on the form.

Defense lawyers for Maxwell asked the judge to immediately order a new trial, but she said she could not do so without questioning the juror.

After Nathan questioned the juror in early March, lawyers on both sides submitted written arguments. Prosecutors said the juror made an "honest mistake" and that it was "crystal clear" that Maxwell received a fair trial.

"Excusing Juror 50’s false answers because he believes his concealed history of sexual abuse did not affect his ability to serve as a fair and impartial juror does not satisfy the appearance of justice," they argued. "Only a new trial would."

But Nathan rejected that reasoning, writing that the juror's claims that he remained impartial toward Maxwell rang true.

When questioned about it, he answered "frankly and honestly, even when the answers he gave were the cause of personal embarrassment and regret," she said. "His tone, demeanor and responsiveness gave no indication of false testimony."