COLLEGE STATION, Texas - The historic Union Pacific No. 4141 Engine, a locomotive painted to match Air Force One, will soon have a permanent home at the George H.W. Bush Presidential Library and Museum.

On Thursday the Texas A&M University System Board of Regents approved a $1 per-year lease, essentially donating two acres to expand the grounds of the museum. Eventually, the acreage will house an exhibit area for a Marine One helicopter as well as the locomotive as part of a multi-million dollar expansion being planned by the George & Barbara Bush Presidential Foundation.

"Texas A&M is proud to host these icons of the Bush presidency," said Chancellor John Sharp in a release. "We do everything we can to keep alive the memory and accomplishments of this wonderful president and public servant." 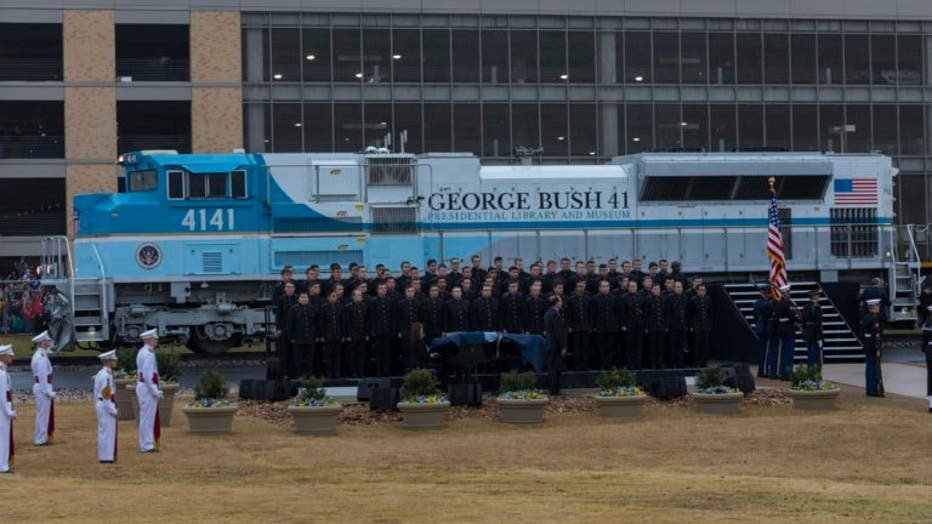 No. 4141 Engine led the Bush funeral train from Houston to College Station in December 2018, when the former president was laid to rest here alongside First Lady Barbara Bush. (Texas A&M University)

No. 4141 Engine led the Bush funeral train from Houston to College Station in December 2018, when the former president was laid to rest alongside First Lady Barbara Bush. A year later, Union Pacific announced it would donate the locomotive to the museum. The railroad had surprised Bush in 2005 by painting it to resemble Air Force One in connection with a train exhibit there.

Former CEO of Union Pacific Dick Davidson was instrumental in the creation of No. 4141, says Texas A&M, and he and his wife Trish have made a significant lead gift to jumpstart private fundraising for the museum expansion. 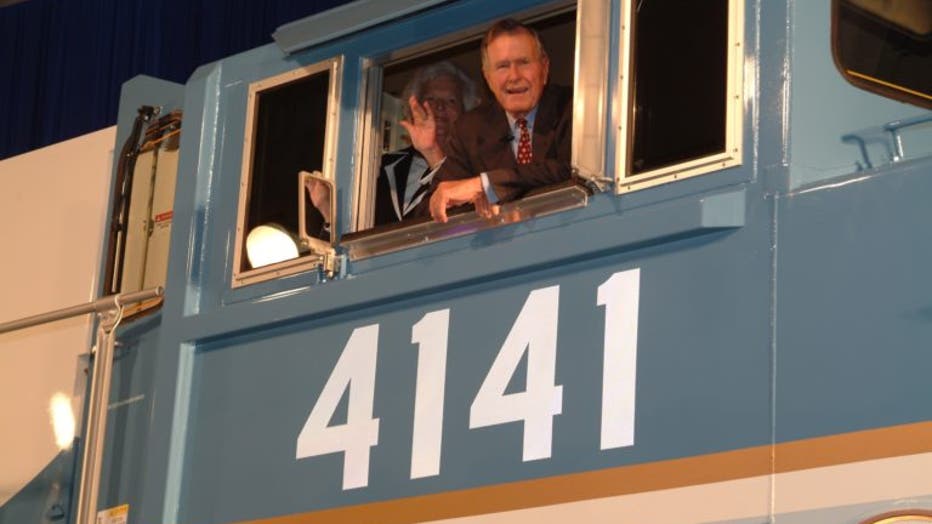 Former President George H.W. Bush and first lady Barbara Bush look out from inside the No. 4141 engine. (Texas A&M University)

"It is fitting this significant piece of history will now make its permanent home at the Bush Center at Texas A&M," said Max Angerholzer, CEO of the George & Barbara Bush Foundation. "The train meant the world to President Bush. We are grateful to the entire Union Pacific team, especially Chairman and CEO Lance Fritz, for this special gift."

The COVID-19 pandemic slowed plans associated with the museum expansion, says Texas A&M. The expansion is expected to also include new meeting space and a restaurant. Foundation officials are hoping to complete the project in time for a celebration they're planning in 2024 for the 100th anniversary of Bush’s birth.

Pandemic-related precautions will delay any public celebration associated with this spring’s arrival of No. 4141 Engine and due to security precautions, the arrival date will not be announced, says the university.

According to Angerholzer, the arrival of Marine One is further in the future as some of the Marine Corps helicopters are being retired, which takes several months in part to remove the classified technology aboard.