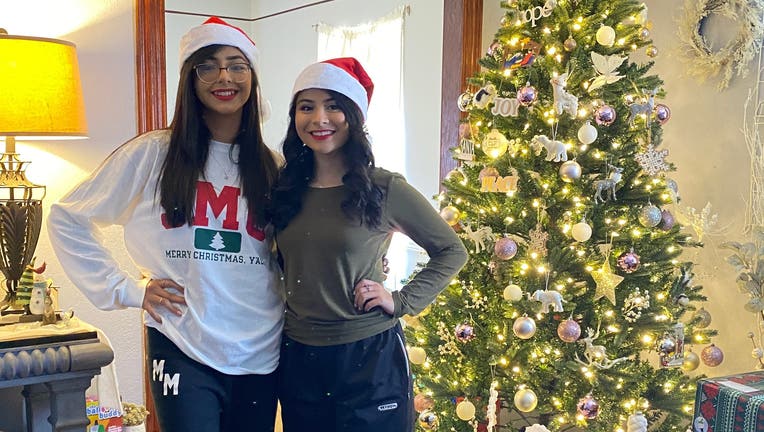 Mayra and Melissa Alvarez are graduating from South Garland High School in the top 5% of their class and both will attend the University of Texas at Dallas this fall.

When situations like getting lost while searching for a class occurred, having each other to rely on made high school easier for both of the Alvarez’s.

"I didn’t have to make friends, I was just fine with her," Mayra said.

"We would walk together from class to class if we didn’t have somebody else that we knew," Melissa said.

The sisters participated in some extracurricular activities together, such as being captains for their school’s World Dance Company team and joining the basketball and cross country teams, but they made sure to get involved with other activities on their own to figure out what they want to do in the future.

"I’ve tried everything over high school: I tried computer science, engineering, architecture, clinicals... even keyboarding," Melissa said. "But I just chose business because I was like, this might be the right one… it’s something I know I can grow in, there’s a lot of opportunities in that field."

Growing and learning more about the business industry made it important for Melissa to go to college. For Mayra, the idea of getting a higher education interested her after noticing every teacher in elementary school had one.

"Going to college is a privilege that not many get," Mayra said.

"If we’re given the opportunity, we have to take it. There’s so many people out here that really want it and they can’t get it… that’s what college means to me, it's a privilege to be able to go," Melissa said.

Though the sisters are the youngest in their family, they will be the first to go to a university. Mayra eventually wants to earn a master’s degree and Melissa hopes to go into the fashion business or try real estate.

Graduating from high school and going to college is a goal they both wanted to accomplish in honor of their parents, who are originally from Mexico, and the sacrifices they made.

"First of all, them leaving from their country and leaving everything behind just to start a new life here in order to give us everything and more," Mayra said.

Mayra and Melissa say they learned a lot about themselves in high school and are excited to experience campus life and their own personal growth as students at UTD.

"Life has many ups and downs," Mayra said.

"But somehow you can always get through it," Melissa said.