PEORIA, Ariz. - The Arizona Department of Public Safety (DPS) says an investigation into a group trafficking large amounts of meth and illegal weapons to Mexico has ended in the arrest of four suspects.

In February of this year, Bart Graves, a DPS spokesperson, says detectives with the DPS's Border Strike Force Bureau and the Pinal County Investigations Unit began an investigation into the coordination between the suspects, saying drugs and high-powered rifles were believed to be headed from Arizona to Mexico.

By mid-March, detectives and SWAT conducted an operation that led to the arrest of the four suspects, one of them being a 17-year-old boy. Graves says five guns and 127 pounds of meth were seized.

"As the suspects were being arrested, detectives discovered one of the suspects had his one and a half year-old infant with him, with firearms in the vehicle next to the child. Fortunately, the child was not injured and eventually turned over to responsible family members," Graves added.

A police K-9 was used to apprehend one of the suspects after he attempted to flee.

Three suspects were booked into the Maricopa County Jail. The fourth suspect, the juvenile, was returned to his parents.

The Arizona Attorney General's Office is prosecuting the suspects. Three of the suspects are identified as Marcus A. Vidal, 22, Jason Ruiz Vela, 21, Jorge Arturo Felix, 22.

The juvenile suspect is not identified, and a mug shot for Jorge Arturo Felix wasn't released.

Authorities say the baby who was next to the guns in the car is Vela's child. 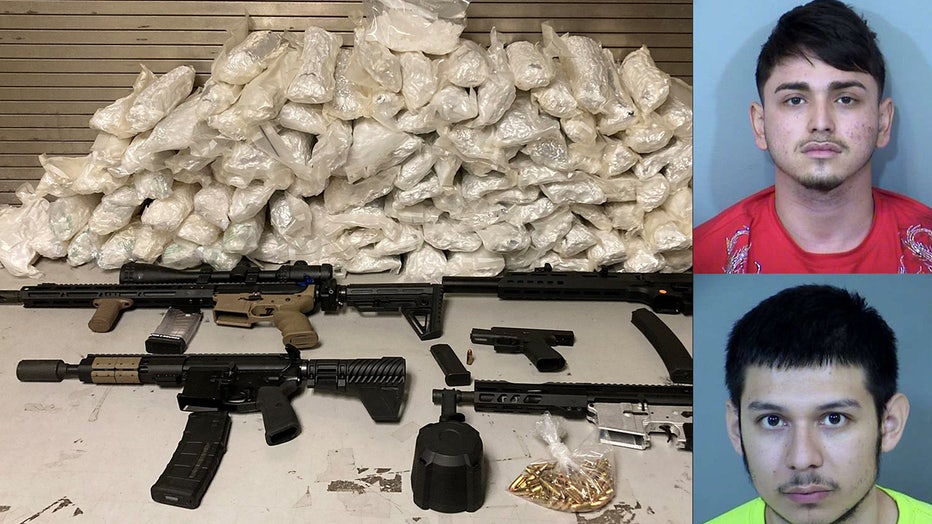 Marcus A. Vidal (top) Jason Ruiz Vela (bottom) are two of four suspects arrested in connection to a weapons and drugs seizure that involved the baby of one of the suspects.

Officials with the U.S. Customs and Border Protection say their officers found meth that was disguised as onions during a drug bust at a California border crossing.

A search warrant was served at a home connected to the man and police say they found about 67,000 fentanyl pills, about $14,000 and five guns. Arthur William Dedrick, 21, was booked into jail on suspicion of multiple felony drug charges, along with other charges.

Record 1.7 million pills seized in the Valley; feds warn Arizona is a gateway for drugs

FOX 10's Irene Snyder has the latest on a Scottsdale PD drug bust that is linked with one of the largest drug cartels.