Fort Worth overloaded with street repairs after winter storm

The city of Fort Worth says water main breaks caused by last month's winter storm led to more simultaneous road repairs than it's had in decades.

FORT WORTH, Texas - The city of Fort Worth says water main breaks caused by last month's winter storm led to more simultaneous road repairs than it's had in decades.

Not since the winter of 1983 has there been as many storm-related street repairs following an arctic blast. It warrants major safety precautions on roadways throughout the city.

"We’re trying to get to the major roads and high traffic roads first, but there’s still quite a number of those," said Fort Worth Water Utilities spokesperson Mary Gugluizza

More than 700 street repairs are on the work list. Holes in the road from water main break repairs during the February winter storm. It means major safety hazards for motorists. 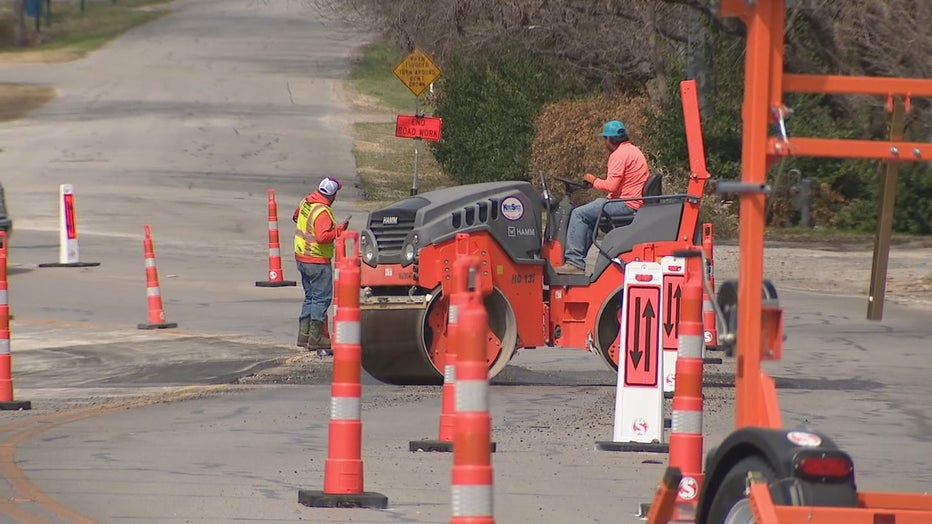 "This is a major thoroughfare right here on White Settlement. The break occurred at a bend so traffic control extends a long distance in both directions to try to make the working area safe," Gugluizza said. "We just ask folks to pay attention to the barricades and to the traffic control that’s in place and please slow down."

The storm aftermath has also opened the spigot on other discussions. Some water customers will receive credits for increased usage.

"We’re looking at what people's water usage was during the storm period this year and comparing it to that same usage last year during that period," Gugluizza said. "And if there’s a difference, we’re crediting them."

From West Fort Worth to another site east at 820 and Lancaster Avenue, the city has three dedicated crews and four private contractors patching and moving. It’s work that will continue for at least weeks.

"It’ll be going on for several weeks. It’s hard to know how long it’s going to take," Gugluizza said. "A lot depends on how much the weather cooperates."

Fort Worth overloaded with street repairs after winter storm

Not since the winter of 1983 has there been as many storm-related street repairs following an arctic blast. It warrants major safety precautions on roadways throughout the city.

Cell phone video captured the aftermath of two water main breaks on Edgefield Road in Fort Worth, just outside of Matt Anderson’s home.

"It was kind of like a river through here," he said.

Anderson says he and his neighbors called the city several times but couldn’t get through. He says the damaged pipes were finally repaired two weeks later.

Repairs on White Settlement Road are proving to be a challenge for crews to stay safe and for drivers to avoid damage to their vehicles.

Abraham Turabi, president of River Oaks Auto Service, says the bulk of complaints from customers were first about weather and now about construction.

"A few customers actually always complain about broken roads and nails in the streets," he said.

While the street repairs may take a while, the city has good news for some residents: a winter storm credit.

If your February 2021 water bill is higher than last February's bill, you’ll get a credit for the difference on the next statement.

"Fantastic! That’s awesome!" he said. "Looking forward to that. Could really use it!"