The need for food and water cannot be underestimated. One North Texas megachurch is doing its part to help thousands of families get through this power and water crisis.

The need for food and water cannot be underestimated. We've seen very long lines at food bank deliveries this week.

One North Texas megachurch is doing its part to help thousands of families get through this power and water crisis.

Gateway Church is working to dish out thousands of meals over the next few days, including the mother of a newborn, who gave birth three weeks after suffering from COVID-19. This week, she lost power. 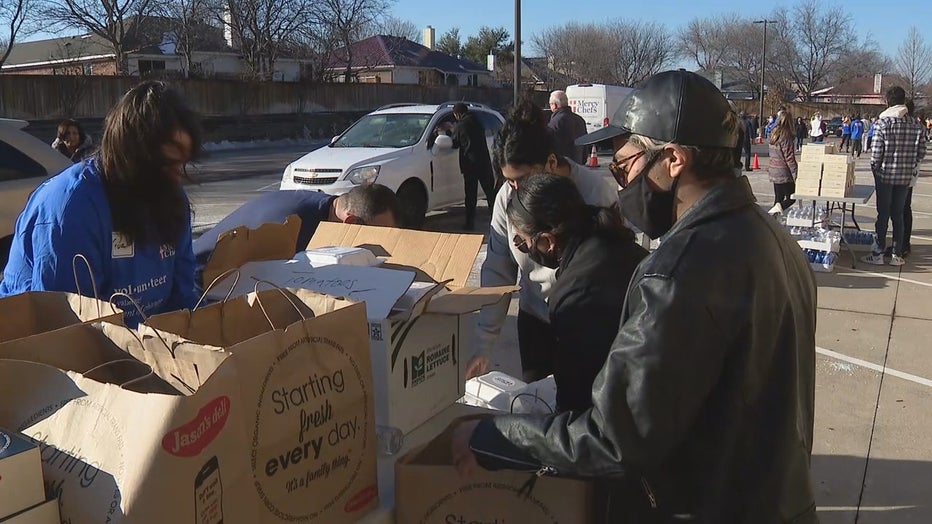 That’s why Gateway Church’s North Fort Worth location is giving away food and water to thousands who need it during the next few days. About 5,000 meals were prepared Friday night.

Kristie Whitney’s growing family of five kids, including a three-week-old son, haven’t had heat for days and their area is under a water boil advisory. Before her child’s birth, she had COVID-19.

"So you have a pregnancy, COVID and a snowstorm. It comes in threes, so maybe we’re done from here?" she said. "Amen. It’s over. In the name of Jesus, it’s done. Amen."

Karen Adamson is grabbing meals for her family because their food spoiled once their fridge and freezer went out.

"We spent two days with no electricity. It got like 47 in the house. And there’s eight of us, including my 92-year old mother," she said. "We’re thankful we don’t have to cook."

All are welcome to grab meals and water to go at Gateway’s North Fort Worth location through Monday.

SKY 4 captured a lengthy line of vehicles at the church’s Southlake location for water distribution Friday morning. Some are still without water and others under a boil advisory.

Some tend to feel embarrassed about asking for help, but people like Juan Chavez say it can happen to anyone. He’s spreading the word to his friends and neighbors.

"Anybody who’s in need," he said. "Come together as one."

Gateway hopes no one shies away so it can help anyone who needs it.

"We’re nursing around the clock every hour and a half and dealing with the struggles of nursing and newborn life, and so I’m sleep deprived to say the least," Whitney said.

Gateway Church hopes to hand out 10,000 meals Saturday. It will serve lunch and dinner through Monday.