The city says about 30% of what people are putting in their recycling bins is actually contaminated and ends up in the landfill. So the city is asking people to wait and think about where that item really should be going.

FORT WORTH, Texas - The city of Fort Worth recently launched a campaign aimed at educating people about what specifically they're supposed to be recycling.

The city says too many people are putting the wrong things in the recycling bin, and it's costing millions in taxpayer dollars.

The city says about 30% of what people are putting in their recycling bins is actually contaminated and ends up in the landfill. So the city is asking people to wait and think about where that item really should be going.

At the Republic Services Recycling Facility in Fort Worth, you’ll find a moving maze of conveyor belts, specialized machines and people sorting materials by hand.

RJ Hillman took FOX 4 on a tour of the facility.

"Here on pre-sort, we’re looking out for items that are gonna break our machines and that are gonna cause problems, hang-ups and jams," he explained. 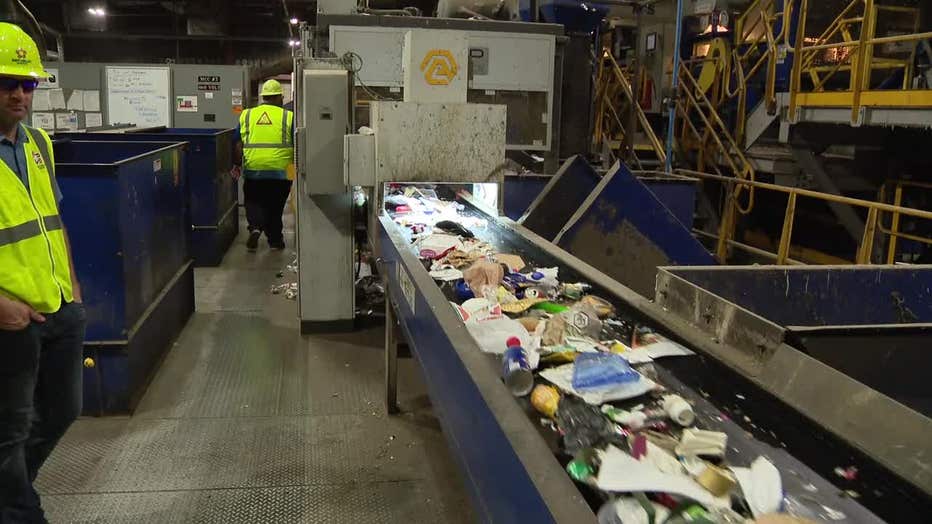 Things like water hoses, extension cords, Christmas lights and plastic bags all clog up the machines.

"This is like an AI system," Hillman said. "It knows what the material is, it knows how to recognize it and therefore knows where to sort it."

Every day, 400 tons of plastic containers, cardboard boxes, aluminum cans and glass are resold or repurposed from the Fort Worth facility alone. It’s a money maker for both the company and its contractor: the city of Fort Worth.

But Brandon Bennett with Fort Worth Code Compliance says there’s a big problem.

"About 20-30% of what comes here to the material recycling facility ends up being waste, and it should have never gone in the cart in the first place," he said. "That’s about $2.5 million in lost revenue each year."

So the city came up with a new educational campaign called W-A-I-T, or ‘Where Am I Tossing?’

The city wants people to be more cognizant about which materials can actually be recycled.

"We’re actually going out into the neighborhoods, and we’re opening up people’s recycling containers and we’re looking to see what’s in there," Bennett said.

Its website also has a ‘waste wizard’ where you can type in an item, and it will tell you whether it should be thrown away or recycled. There’s also an app.

The bottom line: more efficient recycling means more revenue for the city, and that means fewer rate hikes to pay for the service.

"The better people do at recycling, the lower our costs and the higher the revenue we get and the longer we can push out a fee increase to our residents," Bennett said.