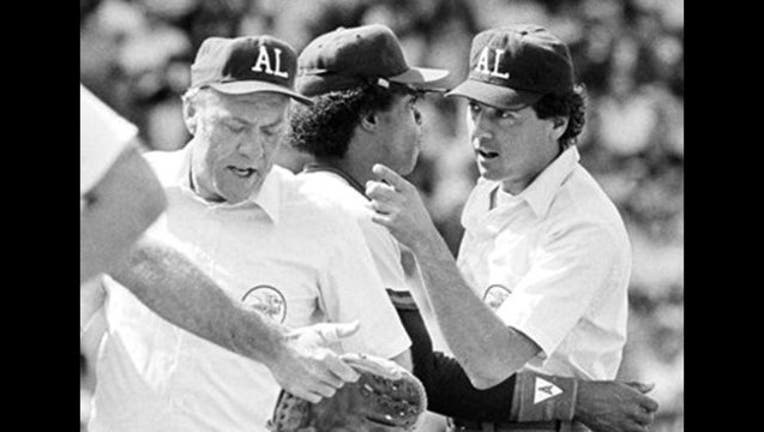 FILE - In this July 11, 1983, file photo, American League umpire Steve Palermo, right, is restrained by California Angels' Rod Carew after he and Angels' Bobby Grich got into an argument in Boston. (AP Photo/File)

Former big league umpire Steve Palermo, whose accomplished career ended when he was shot trying to break up a robbery in 1991, has died. He was 67.

Major League Baseball announced Sunday that Palermo had died, without providing details. Palermo, who lived in the Kansas City area, had been in poor health.

Palermo broke into the majors late in the 1976 season and joined the American League staff the next year. He worked the 1983 World Series, several playoff series and the All-Star Game. He consistently drew praise from players, managers and fellow umpires for his work.

In July 1991, Palermo was having a late-night meal in Dallas when two servers who just left were mugged. Palermo chased the attackers and was shot, leaving him paralyzed from the waist down.

Palermo eventually was able to walk, with the help of cane, and continued his recovery. He later became an umpire supervisor for MLB.