Former Lake Worth officer sued after running over fleeing suspect

A Fort Worth man is suing a former Lake Worth police officer in federal court, calling an incident where he was running away from cops on foot and struck by a police SUV excessive force. We want to warn you the video may be hard to watch.

LAKE WORTH, Texas - A Fort Worth man is suing a former Lake Worth police officer in federal court, calling an incident where he was running away from cops on foot and struck by a police SUV excessive force.

Video from the dashcam and body camera from the 2020 incident was made public on Monday. The video is intense. We want to warn you the video may be hard to watch.

Bates had fled from a traffic stop, and it was later found that he had drugs on him. He had an active warrant. 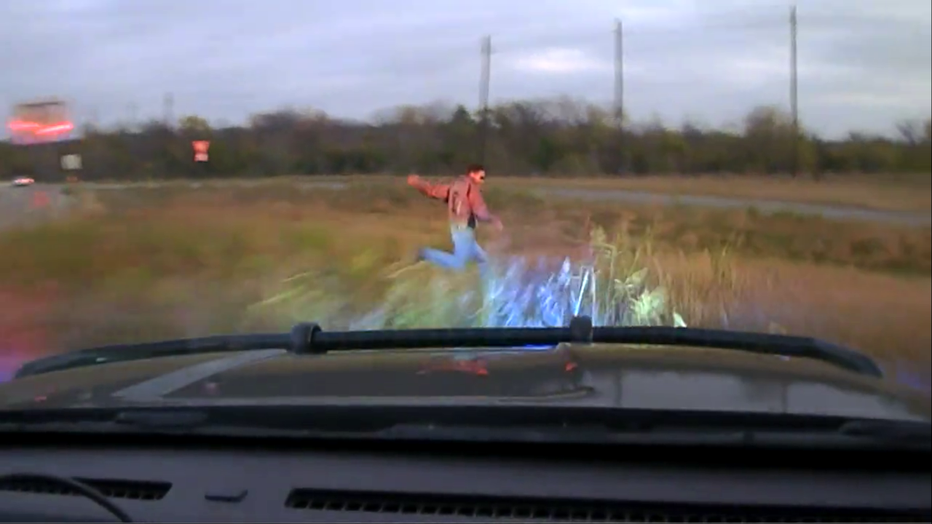 The officer was not charged, but the lawsuit claims the officer intentionally hit the motorcyclist after he crashed the bike and ran away.

Granado was attempting to pull over Bates for a license plate that didn’t match his motorcycle. However, Bates sped off.

The chase lasted roughly two minutes before Bates crashed his bike and ran off. That’s when the officer drove his SUV off the road and hit Bates head-on.

Granado’s body camera footage revealed the officer cursing right when it happened. He called it an accident.

"I hit my brakes, and it slid. And I hit him with the front of the car," he said.

Lake Worth Chief JT Manoushagian says evidence suggests it may have been an accident.

"So as soon as he applied the brakes, the car began to go into a slide," he said.

James Roberts is Bates’ attorney. He believes it was intentional.

"Literally leaves the roadway tracks. Mr. Bates, as he runs through the field, turns his car and runs him down going 45 miles per hour," Roberts said.

Bates filed a lawsuit Monday. His attorney admits he shouldn’t have fled.

"The decision to flee was a poor decision," he said.

However, Roberts added something else.

"In America, you don’t get hit with a car for making just a poor decision," he said.

"I wish we wouldn’t have collided with Mr. Bates. I wish he would’ve surrendered," Manoushagian. "I wish that we could’ve taken him into custody peacefully without injury to him or anyone else."

Lake Worth police say Officer Granado was allowed to pursue, but he violated several safety protocols.

"It is," Manoushagian said. "But just because you can doesn’t mean you should."

Granado was suspended for two weeks but remained with the department until he resigned last month.

"I wish that it wouldn’t have happened. I wish that different decisions had been made," Manoushagian said.

Grand Prairie police led the criminal investigation into Officer Granado’s crash in an attempt to be an unbiased third party. The case was sent to a Tarrant County grand jury, which declined to indict the officer last year.

The Department of Justice and FBI also declined action.

Bates was eventually arrested and charged with evading arrest and drug possession. Police found meth on him and also learned he had an active parole warrant. However, all the charges were dropped.

Since the incident, Roberts says Bates has undergone surgeries and has permanent scarring from his injuries.

"He broke Mr. Bates’ back. He fractured his spine," Roberts said. "He broke his leg, and he fractured three of his ribs."

Roberts believes there’s no excuse for the crash, that it was a violation of his client’s fourth amendment constitutional right, citing excessive force, and is seeking unspecified damages.

"It was due to the officer’s poor judgment," the chief said.

It is important to point out this lawsuit is going after the officer and not the department.