After four hours of testimony from experts in the foster care industry, it was this panel of young women with firsthand experience in the foster system who provided the most eye-opening information.

It is part of their effort to learn how the state can help turn around the troubled child welfare agency.

It was the third time the Senate select committee charged with reforming the state's foster care system has met. But it was the first time for lawmakers to hear directly from former foster children themselves.

After four hours of testimony from experts in the foster care industry, it was this panel of young women with firsthand experience in the foster system who provided the most eye-opening information.

Liberty Hamilton testified before the special Senate committee on CPS that her foster mom abused alcohol and drugs.

"I was placed in foster care until June 6, 2020. It was the most traumatic experience I ever had," she said. "She would always leave pipes lying around that she used to smoke." 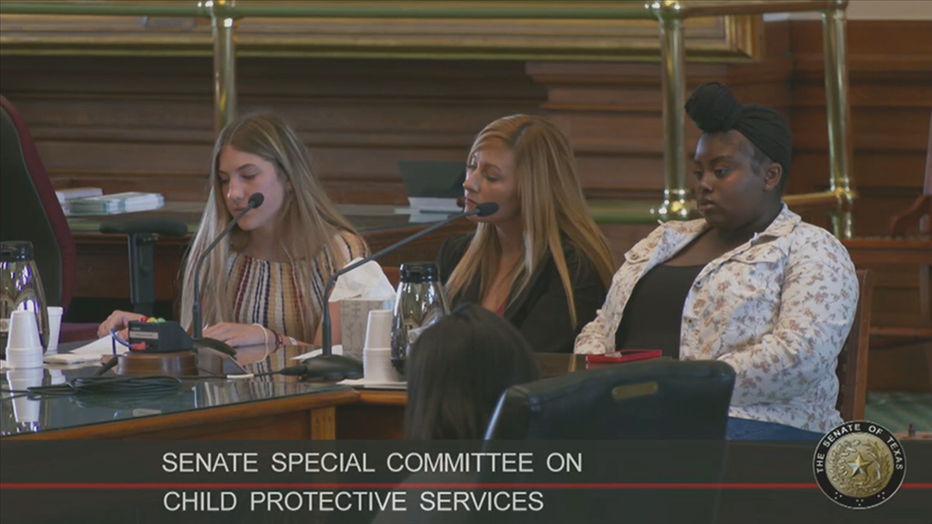 Hamilton said her foster mom would sometimes not feed her and her two little brothers’ dinner, and they would go to bed hungry.

"She would party all night with loud music and random guys. She would say they were just business partners," she recalled.

It was during the pandemic, so CPS only had virtual appointments.

"She forced us to lie to CPS and stood outside our room when on private calls with our mom to make sure we did not tell her anything," Hamilton recalled.

Hamilton told lawmakers her mom had already placed them in a safe home of a friend when she relapsed, and it was better than the foster home.

"I know my mom struggled with addiction, but I was always in a clean home with clean clothes," she said. "I was never hungry, made good grades, involved in sports, and my mom never missed a game."

Hamilton and her brothers are now back living with their mom.

Precious West, now 18, spent years in the foster system. She said her caseworker was unresponsive.

"I did have a good therapist, but my caseworker decided she did not want to take me there anymore," she recalled.

While West is now 18 and is out of the system, she is speaking out in hopes of helping others.

"My 14-year-old sister is going through this, and I really don't want that for her," she said.

Earlier in the day, lawmakers heard from experts who attested to the benefits of privatizing parts of the child welfare system so that there could be more accountability.

For example, if a non-profit is not doing its job, the state could end the contract. It's a method an expert testified has worked well in Florida for nearly two decades.