Family of Trevor Reed, who is detained in Russia, speaks with President Biden over the phone

Marine veteran Trevor Reed's family lives in North Texas, and they are calling on anyone with influence to get their son home, including camping out near President Joe Biden's event Tuesday in Fort Worth.

FORT WORTH, Texas - The situation in Russia is making it even trickier to bring home an American jailed in that country.

Marine veteran Trevor Reed's family lives in North Texas, and they are calling on anyone with influence to get their son home, including camping out near President Joe Biden's event Tuesday in Fort Worth.

The family got to Fort Worth early Tuesday morning in hopes to position themselves close enough to President Biden that he might stop and talk to them.

His family said he's in solitary confinement and getting weaker by the day.

"We love our son and we're going to fight until our dying day to bring him home," Trevor’s father, Joey Reed, said.

A North Texas family is pleading with President Biden to bring their son home, setting up post near the Fort Worth VA Clinic that Biden visited on Tuesday.

Reed’s family did not get to meet with Biden, but they did get to talk to him by phone for a few minutes.

Biden said not a day goes by that he does not think of Reed, and told the family he prayed a rosary Tuesday for Reed and they would meet at a later date.

Reed's family said that phone call has given them hope. 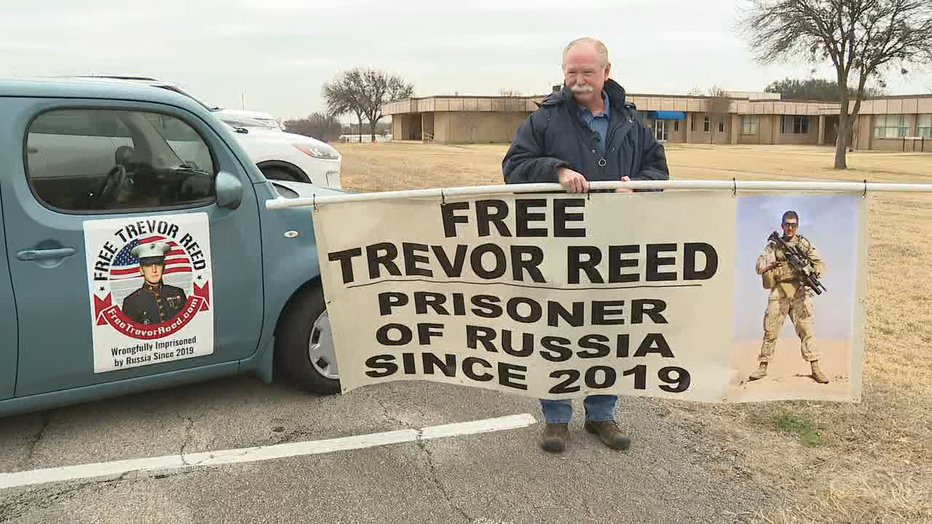 RELATED: Biden arrives in Fort Worth as he seeks more health care for veterans

Trevor Reed, a U.S. Marine veteran, was convicted in 2020 and sentenced to nine years in a Russian prison.

The Kremlin said he endangered the lives of two Russian police officer while being transported to jail for public intoxication.

While inside the police car, Reed is said to have grabbed the police officer driving, causing him to swerve dangerously, and elbowed another officer who tried to intervene.

Reed went to Moscow in 2019 to learn Russian and visit his Russian girlfriend.

Reed said he remembers nothing of the incident because he was drunk at the time.

He spoke to reporters in Moscow after his sentencing in July 2020.

"They asked me where I served in the Marine Corps, what deployments I was on. Everything about this case is political," he said at the time.

They say Reed, who served as a Marine in the presidential guard during the Obama Administration, had long COVID-19 and now tuberculosis.

"And now he's coughing blood daily. He has an off and on again fever. He has pain in his lungs," Reed’s father said.

Reed's family got to talk to him Monday for the first time in 232 days.

There is bipartisan support to have Reed released.

In June 2021, the U.S. House passed a resolution calling for Reed's release.

The family is worried that time for talks is running out, as the U.S. tightens sanctions against Russia for the invasion of Ukraine.

"Last time I saw my brother was in a tiny jail in Moscow through a tiny partition of glass, and now all I can think of is that's the last time I'm going to see him and I'd really like the President to change that. He's the only one who can," Reed’s sister said.