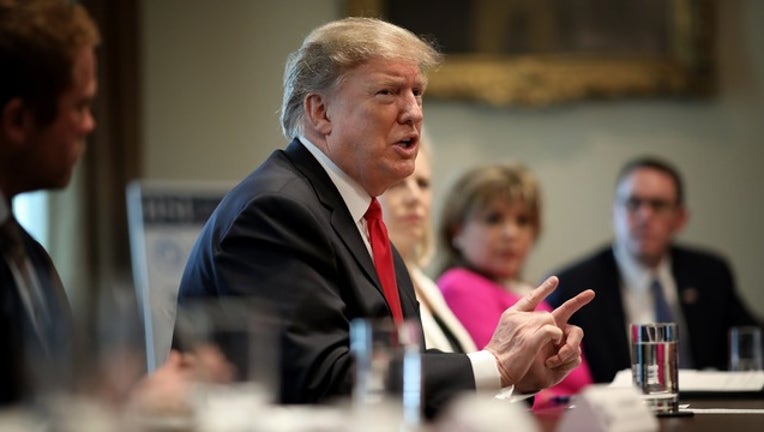 U.S. President Donald Trump speaks during a meeting at the White House February 1, 2019 in DC. He discussed the fight against human trafficking on the southern border and renewed his call for funding for the wall. (Photo by Win McNamee/Getty Images)

President Donald Trump seems to suggest that he'll announce some sort of border wall action during next week's State of the Union.

The president says with the way talks are going, Democrats do not want border security. And when asked about whether he'll declare a national emergency, he said “there's a good chance” it will happen.

The National Emergency Act has been in place by Congress since 1976, but it has no specific definition of what is considered an emergency. Historically invoked during unusual threats to the nation, there have been 58 national emergencies declared since the act was signed into law. Thirty-one of them are still in effect today.

President Trump asked about prospects for a border wall following a Friday briefing on human trafficking at the southern border.

“We will be looking at a national emergency because I don’t think anything is going to happen,” he said.

Following President Richard Nixon and the Watergate scandal, Congress became concerned about the executive branch having too much power.

“It did a review of all the United States statutes about emergencies, and it came up with the National Emergencies Act,” explained David Coale, a constitution attorney.

The act gives the president access to powers contained in more than 100 federal laws.

“Jimmy Carter, in one of the first uses of the law, he declared a national emergency about something involving Iranian government property in the U.S.,” Coale said.

Carter’s national emergency is still in place and has been renewed annually by presidents since, as required by law.

Many are wondering why there is so much attention to the possibility of President Trump using the act.

“There’s political reasons, and there's practical reasons,” Coale said. Politically, there’s a serious question whether it really is an emergency. It’s a practical issue. It’s a lot of money.”

“He can say there’s an emergency and give me that money.  Now, can he keep doing it? That’s the question,” Coale said. “The Emergencies Act says if the president declares an emergency, Congress can overrule that if both houses of Congress by a veto-proof majority pass a resolution saying no emergency.

The president says he is certainly thinking about declaring the southern border a national emergency.

“We have very, very strong legal standing to win. We are doing it, regardless,” President Trump said. “Listen closely to the State of the Union. I think you'll find it very exciting.”