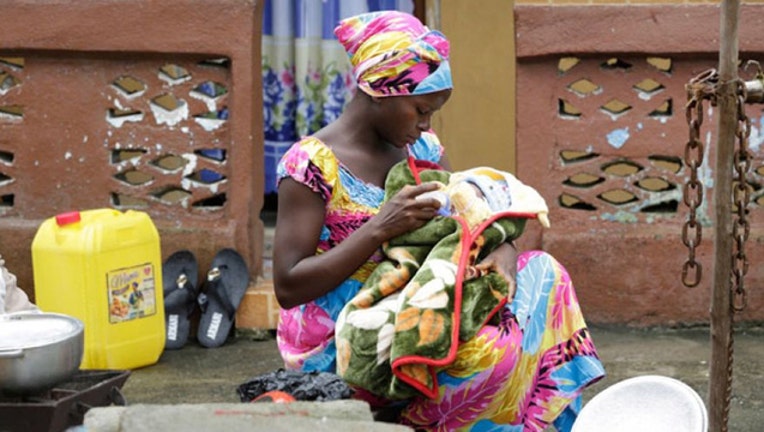 KENEMA, Sierra Leone (AP) — Ebola did not take Victoria Yillia's life. And it could not prevent the birth of her son.

And yet it loomed, even on this, her happiest day.

She delivered her child just a few minutes' walk from the ward where just last year she had hovered between life and death, and nurses and medical staff still wore full protective suits and masks for fear of any lingering infection. Doctors gave her formula and told her not to nurse her baby until they ran tests to be sure there were no traces of the virus in her breast milk.

Her husband Anthony beamed in the maternity ward as they talked about names for the boy nestled in a blanket with a yellow knit cap. But Victoria burst into tears: Her mother was not here to help her, to show her what to do with her first child. Nor was her grandmother, or her three older sisters.

The couple and their new baby are all that remain: Twenty-one members of her family died of Ebola when the virus ripped through this corner of Sierra Leone.

"Because I lost all my relatives, God has blessed me and I can start a new family," she said, softly cradling the boy. "With this baby, all I have lost has come back to me."

Victoria is not just her family's sole survivor — she was also the first person to survive Ebola in Sierra Leone. Her survival was celebrated nationally: She met the president, and the day of her release, June 8, is now National Survivors Day.

If she is the face of survival in Sierra Leone, it is fitting that her life of hope and sorrow mirrors that of an Ebola-ravaged country struggling to move on, despite its anguish.

It all began so happily. She met Anthony in the village of Koindu when she was just 16. He was volunteering at her school with dreams of becoming a teacher and couldn't take his eyes off of her. They married and she stayed behind with her family as he completed his university studies in Kenema.

Soon she was expecting, but her first weeks of pregnancy were fraught with complications. Victoria had no way of knowing that a nurse who treated her had also come into contact with someone who'd attended a funeral in Guinea — and brought the deadly Ebola virus across the border.

She lost the baby in late May 2014 just as she was nearing the end of her first trimester, and she was sent to the maternity ward in Kenema where her husband studied. It was there doctors determined she was suffering from more than a miscarriage. The 20-year-old had Ebola.

Meanwhile, back home in her village other family members began falling sick.

"We were at the hospital when we heard that her sister's baby boy was dead," Anthony recalls. "A few minutes later they called to say that her mother was sick and two days later she died."

Soon Victoria's father was feverish and ill. Her grandmother, her three older sisters, all died as well. Anthony didn't know how to tell his wife she was the only survivor, and feared the unrelenting grief could take her too. The decision was made to wait several weeks until she regained some strength.

"The pastor was called and the trauma was very high. It took a long time for her to be consoled," her husband recalled. "After we told her she cried and cried for weeks and days."

After her much-publicized discharge from the hospital, she returned to her village to recover away from the attention. With her was Sia, her mother-in-law, who also survived because she was in Kenema with Victoria when everyone else fell ill. Their reconstituted family also included a 3-year-old relative named Bintu who had lost her parents and her siblings to Ebola. Victoria looked after the little girl while Anthony went back to school.

When Victoria discovered she was pregnant again, she was surprised. Doctors had said there was no way of knowing if she could even carry a child to term after having Ebola. For reasons not yet known, other survivors have suffered miscarriages or had stillborn babies, said nurse matron Elizabeth B.M. Kamara at the Kenema hospital.

In the end, Victoria's labor was rather ordinary. She started contractions around 9 p.m. on a Saturday and her son arrived the following evening, a healthy 6 pounds, 3 ounces (2.8 kilograms). Like any new mother, she was nervous about holding her child, all the more so because health officials wanted to run more tests before letting her sleep with the baby or nurse him.

On Thursday, she left the hospital and headed to the room where she, her husband, her mother-in-law and little Bintu now live. Sia, who had had nine children of her own, helped Victoria breastfeed.

The following Sunday morning, Sia made porridge over a coal fire, and hung baby bibs and diapers on the laundry line as darkening clouds hovered above. This should have been the child's naming ceremony — an event that takes place on the seventh day after birth, typically a joyous occasion bringing together the extended family. But Victoria and Anthony put off the celebration, given their circumstances.

Nonetheless, the pastor insisted the baby should be blessed. Victoria changed into her Sunday finest — a two-piece ensemble and head wrap of bright pink-and-turquoise tones. She sidestepped puddles as she brought the little boy to church for the first time.

The pastor gave his sermon in the cinder-block church, as parishioners sat on wooden benches and plastic lawn chairs on dirt floors. Rain rattled on the metal roof above, muffling the voices as Victoria led the congregation in "I Have Faith in God."

The child was passed around by the women of the church, and then the pastor blessed him. He called the child "Sunday Boy" for now; the couple already had chosen a name, though it would not be announced just yet. They will call the child Barnabas — a Biblical name that often translates as the son of encouragement or consolation.

"He will be the foundation of our family, and a source of comfort to his mother," the new father said proudly. "We pray that he will become a success in life."

They know the path will not be easy without the support of extended family — no maternal cousins for Barnabas to play with, no maternal aunts to dote on him.

The family will manage, Anthony said. For him it is still a miracle: "We are here."