EDINBURGH, Scotland - As former President Donald Trump departed the White House Wednesday morning for his new home in Florida, Scotland’s first minister said many people in her country "will be very happy to say ‘cheerio’ to Donald Trump."

Speaking ahead of President Joe Biden’s inauguration on Jan. 20, Nicola Sturgeon, first minister of Scotland, said, "I think ‘don’t haste ye back’ might be the perfect rejoinder to him."

"First, I’m sure many of us across the chamber and across Scotland will be very happy to say ‘cheerio’ to Donald Trump today," Sturgeon said.

She then congratulated Vice President Kamala Harris and Biden on their presidential victory and inauguration, noting the historic nature of Harris’ ascension to the office as the first woman, African American and person of South Asian descent to be elected to the role.

"Kamala Harris in particular today doesn’t just become the Vice President, she makes history in a number of different ways and she has my warm congratulations," Sturgeon added.

Earlier this month, Sturgeon warned Trump against traveling to Scotland after reports surfaced that he was planning to visit one of his golf courses in Turnberry. 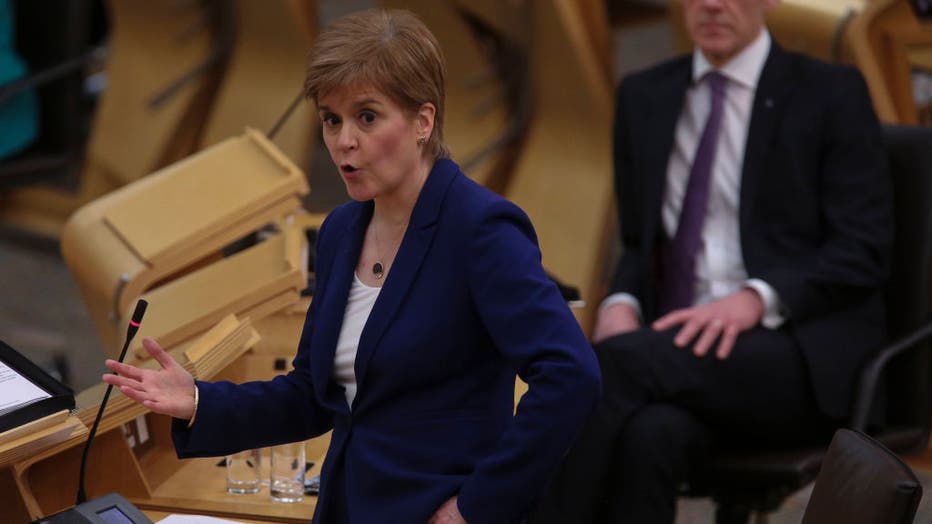 Speaking during a coronavirus update, Sturgeon said of a prospective visit by Trump, "We are not allowing people to come into Scotland without an essential purpose right now. And that would apply to him just as it applies to anybody else."

"Coming to play golf is not what I would consider to be an essential purpose," she added.

Elsewhere in Europe, close U.S. allies finally saw a chance to come in out of the cold after strained security and economic relationships with the Trump administration.

"This new dawn in America is the moment we’ve been awaiting for so long," said European Commission President Ursula von der Leyen, hailing Biden’s arrival as "resounding proof that, once again after four long years, Europe has a friend in the White House."

"We have our differences and they will not magically disappear. America seems to have changed, and how it’s perceived in Europe and the rest of the world has also changed," added Michel, whose open criticism of the Trump era contrasted with the silence that mostly reigned in Europe while the Republican leader was in the White House.

"Despite the attempts to tear at America’s institutional fabric, election workers and governors, the judiciary and Congress have proven strong," he said.

With Biden and Harris, Steinmeier said the U.S. would again be a "vital partner" to tackle issues like the coronavirus pandemic, climate change, security issues including arms control and disarmament, and multiple conflicts.

In Ballina, Ireland, where Biden’s great-great- grandfather was born in 1832, a mural of a smiling Biden adorned a wall in the town, where some of the president’s relatives still live.

"As he takes the oath of office, I know that President Biden will feel the weight of history — the presence of his Irish ancestors who left Mayo and Louth in famine times in search of life and hope," Irish Prime Minister Micheal Martin said.