Trump supporters clashed with police and attacked the Capitol building in Washington DC on January 6, as lawmakers gathered to count electoral votes to affirm the presidential victory of Joe Biden.

WASHINGTON - The United States Department of Justice said 13 people have been charged in federal court for crimes committed during a violent riot that occurred on Wednesday when a mob of Trump supporters stormed the U.S. Capitol.

"The lawless destruction of the U.S. Capitol building was an attack against one of our Nation’s greatest institutions," said Acting U.S. Attorney Michael Sherwin. "My Office, along with our law enforcement partners at all levels, have been expeditiously working and leveraging every resource to identify, arrest, and begin prosecuting these individuals who took part in the brazen criminal acts at the U.S. Capitol."

RELATED: Timeline of the pro-Trump riot at the US Capitol: How the chaos unfolded

"We are resolute in our commitment to holding accountable anyone responsible for these disgraceful criminal acts, and to anyone who might be considering engaging in or inciting violence in the coming weeks – know this: you will be prosecuted to the fullest extent of the law," Sherwin said.

Among those charged was 60-year-old Richard Barnett, who the DOJ said was charged with "Knowingly entering or remaining in any restricted building or grounds without lawful entry; violent entry and disorderly conduct on Capitol grounds; and theft of public money, property, or records."

On Wednesday, Barnett was photographed sitting inside House Speaker Nancy Pelosi’s office with one leg propped up, resting on her desk.

A spokesperson for Arkansas police and a senior official for the DOJ confirmed on Friday that law enforcement took Barnett into custody in Little Rock, Ark. 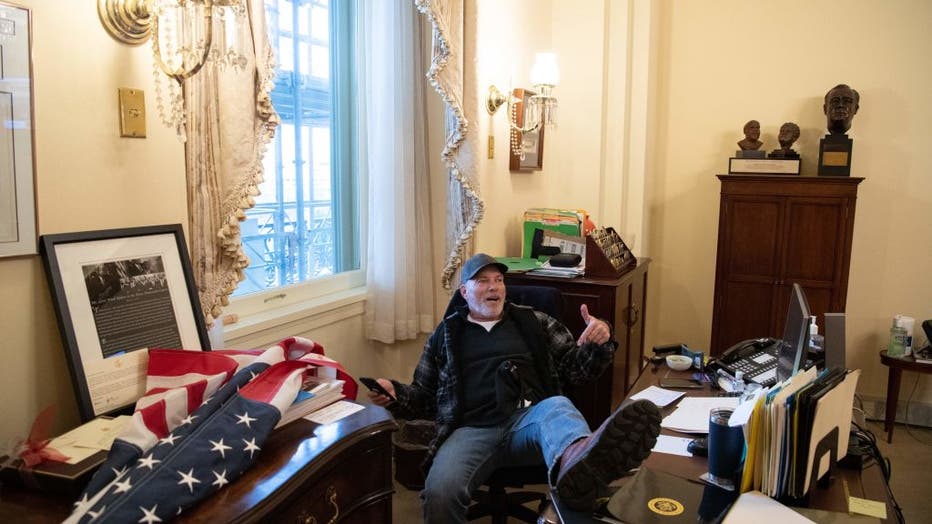 Richard Barnett, a supporter of US President Donald Trump sits inside the office of US Speaker of the House Nancy Pelosi as he protest inside the US Capitol in Washington, DC, January 6, 2021.

After the break-in, Barnett told KFSM he was looking for the bathroom when he saw the door to Pelosi’s office was open.

"I sat down here in my desk. I’m a taxpayer. I’m a patriot. That ain’t her desk — we loaned her that desk," he reportedly said. "And she ain’t appreciating the desk, so I thought I would sit down and appreciate the desk."

A second suspect, Lonnie Coffman – whom AL.com identified as being 70 years old – was found to have been in possession of two handguns, an assault rifle and 11 Molotov cocktails that included gasoline and materials that appeared to constitute homemade napalm, the official said.

Coffman, from Falkville, Ala., was identified after police linked him to a suspicious red GMC pick-up truck with Alabama plates.

Also charged was Mark Leffingwell, accused of knowingly entering restricted ground and assaulting an officer after he entered the Capitol. Court papers released Thursday in connection with his U.S. Capitol Police (USCP) arrest show Leffingwell repeatedly punched a USCP officer in the helmet and chest.

Another man is Christopher Michael Alberts, a Maryland man, accused of illegally entering the Capitol while in possession of a loaded Taurus 9mm handgun, as well as a separate magazine filled with ammunition. USCP said Alberts, who was wearing a bulletproof vest, had "immediately tried to flee" before police detained him, court papers show. He also allegedly had a pocketknife at the time.

Alberts told police he had the gun "for personal protection and he did not intend on using the firearm to harm anyone," court papers show.

Officials previously announced the arrests of 82 individuals at the state, local and federal levels, according to reports.

The FBI’s Washington Field Office early Friday morning released 40 photos of people who are wanted in connection with Wednesday’s events.

The DOJ released a full list of the 13 who were charged, including their crimes, on their website.