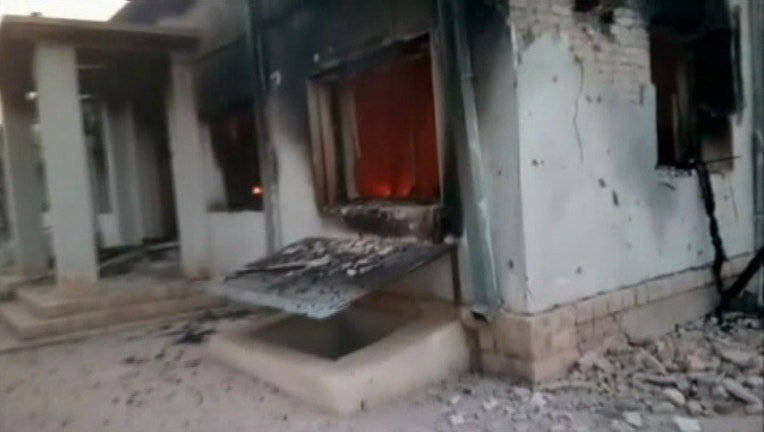 WASHINGTON (AP) — The U.S. airstrike on a hospital in Afghanistan, which U.S. officials have called a "mistake," may have exceeded the rules American forces have operated under since their combat mission ended nearly a year ago, officials say.

U.S. officials have declined to discuss most circumstances of the attack in Kunduz, which killed 22 civilians, because American and Afghan investigations are underway.

Gen. John F. Campbell, the top U.S. commander in Afghanistan, told a Senate committee on Tuesday that as a result of the strike, he is requiring that every U.S. service member in Afghanistan be retrained on the circumstances in which U.S. firepower can be used.

"To prevent any future incidences of this nature, I've directed the entire force to undergo in-depth training in order to review all of our operational authorities and rules of engagement," he said.

Campbell did not elaborate, but his statement suggested that the U.S. attack mission was undertaken in error, even if the target had not been a hospital and there had been no civilian casualties.

Campbell said Afghan forces fighting to retake Kunduz from the Taliban had requested U.S. air power, and that a U.S. special operations unit in the "close vicinity" was communicating with the crew of the heavily armed AC-130 gunship that pummeled the hospital.

U.S. forces do not have blanket authority to fulfill every Afghan request for U.S. firepower.

When President Barack Obama ended the U.S. combat mission, he directed the remaining U.S. forces to focus on training and advising Afghan security forces and on counterterrorism missions. Authority to use force was limited to three circumstances: "force protection," or the defense of U.S. and allied troops; support of missions targeting remnants of al-Qaida in Afghanistan; and assisting Afghan forces in extreme situations where they faced mass casualties.

It's not clear whether any of those three criteria applied to Kunduz. Campbell has said that U.S. forces were not directly threatened at the time, and there is no indication that al-Qaida was present.

In a report to Congress in June, the Pentagon said U.S. forces were no longer authorized to target individuals based on affiliation with the Taliban or any group other than al-Qaida. It said U.S. forces are permitted to take action against individuals that "pose a direct threat" to U.S. and coalition forces.

"For example, U.S. forces no longer target individuals solely on the basis of their membership in the Taliban; however, if a member of the Taliban threatens U.S. or coalition forces, or provides direct support to al-Qaida, U.S. forces may take appropriate action," the report said.

"To be clear, the decision to provide (airstrikes) was a U.S. decision, made within the U.S. chain of command," Campbell said. "The hospital was mistakenly struck. We would never intentionally target a protected medical facility."

Defense Secretary Ash Carter, who was traveling in Europe on Tuesday, issued a statement promising a full and transparent investigation. "We will do everything we can to understand this tragic incident, learn from it and hold people accountable as necessary," he said.

Doctors Without Borders, which believes the attack may have been a war crime, wants an independent and impartial investigation.

The group's international president, Joanne Liu, called for an impartial and independent investigation of the facts and circumstances of the attack, "particularly given the inconsistencies in the U.S. and Afghan accounts of what happened over recent days." Liu added, "We cannot rely on only internal military investigations by the U.S., NATO and Afghan forces," she said.

In his testimony, Campbell also recommended that Obama revise his plan and keep more than 1,000 U.S. troops in the country beyond 2016.

Campbell said security and political conditions in Afghanistan have changed since Obama announced his plan in 2014 to cut the current U.S. force of 9,800 to an embassy-based security contingent of about 1,000 in Kabul post-2016. Obama has vowed to a war-weary nation to end the U.S. war in Afghanistan and get American troops out by the time he leaves office in January 2017.

Campbell said, however, that Afghanistan remains engaged in a violent battle against the Taliban. He said military operations in Pakistan have pushed fighters, including those linked to al-Qaida, into eastern and northern Afghanistan and the emergence of Islamic State fighters has further complicated the conflict.

Reducing the U.S. presence to just a 1,000-person contingent based at the U.S. Embassy in Kabul would leave the United States with limited ability to train and assist the Afghan forces and even less capacity to conduct counterterrorism operations. Campbell said the options he has provided to his superiors are for troop levels beyond 1,000, but he declined to reveal how many troops he believes may be needed or for how long.