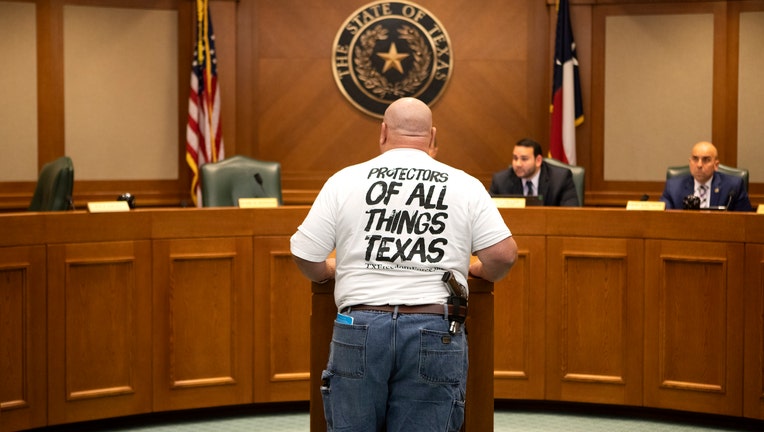 With the proper license, visitors to the Texas Capitol are allowed to carry open or concealed guns. (Miguel Gutierrez Jr./The Texas Tribune)

AUSTIN, Texas - There won't be fewer guns in the Texas Capitol this legislative session. But there might be more firearms tucked away in boots, holsters, bags and desks under the pink dome, already reputed to be one of the most armed state capitol buildings in the country.

The recent armed insurrection at the U.S. Capitol and threats of right-wing extremist violence have prompted calls in some states to curtail legal weaponry in statehouses, but in keeping with Texas' embrace of firearms, no new rules are expected.

Texas is one of at least eight states with virtually no restrictions on guns in its capitol building, according to the Michigan Advance, a nonprofit news site tracking statehouse security rules nationwide. Texans with handgun licenses can carry firearms into the Capitol openly or concealed and bypass the building’s metal detectors for entry within seconds. Licensed state lawmakers can bring their guns on the chamber floors, and some have been known to keep firearms in their desks.

The Texas Capitol "is probably one of the most well-armed buildings in the state," one then-state lawmaker told The New York Times in 2013. That year, dozens of Texas lawmakers routinely carried guns inside the Capitol, current and former lawmakers told The Times.

Even with restrictions to curtail spread of the coronavirus, the building's occupants and visitors are likely even more armed today, gun groups on both sides of the aisle told the Tribune.

State Rep. Briscoe Cain, a Harris County Republican, said there are a few dozen guns in offices along the hallway of his Capitol office alone, and Texas Department of Public Safety leadership recently estimated that several lawmakers carry weapons into the building. One lawmaker is known to carry three guns at all times, said Cain.

"There’s more (guns) in my office than there are people," Cain said.

Other states across the country are tightening security in their capitol buildings. Michigan, which previously had almost no statehouse gun restrictions, reversed course on Jan. 11 to ban people from openly carrying inside. A majority of states ban guns from their statehouses altogether, and at least nine have varied restrictions, according to the Advance.

Texas officials dismissed calls to restrict guns in the Capitol, even as DPS closed the building in anticipation of armed protests surrounding the presidential inauguration. That move was "a recognition that allowing guns in the Capitol and around the Capitol … is a threat to public safety," said Ed Scruggs, board member and spokesperson for Texas Gun Sense.

Before the Legislature gaveled in on Jan. 12, three lawmakers asked Gov. Greg Abbott and other top brass to bar the public from carrying guns inside the Capitol on opening day, arguing that "allowing individuals to carry deadly weapons, especially when there are planned protests, will threaten the safety of all those gathered in the building, including our fellow legislators, staff members, their spouses and children."

That request went unanswered, said state Sen. Carol Alvarado, who co-signed the letter and said she felt safe on opening day because of the many state troopers stationed throughout the building. In a statement, a spokesperson for House Speaker Dade Phelan, R-Beaumont, thanked DPS for its efforts to keep everyone safe on opening day. Abbott and Lt. Gov. Dan Patrick did not respond to requests for comment.

Some Capitol visitors might be shaken to see a lawmaker or fellow Texan testify on a bill wearing a gun on their hip. But licensed firearm owners, held to the state's vetting and training rules, have "coexisted peacefully" in the Capitol for more than two decades, said Andi Turner, legislative director for the Texas State Rifle Association. Texas made it legal to carry concealed weapons in 1995, and lawmakers allowed the open carry of firearms in 2015.

"It’s a little bit like health insurance," Turner said. "You have it, you hope you never need it, but it’s good to have if you think you need it."

Without restrictions on guns inside the Capitol, Alvarado said the onus is on individual lawmakers and staffers to be vigilant of their surroundings. Gun safety proponents would rather see tighter security for those carrying weapons, Scruggs said, but even measures that do not directly limit access to guns, such as installing metal detectors, are political sticking points.

When metal detectors were recently installed outside the U.S. House chamber, several Republican members from Texas, including U.S. Reps. Louie Gohmert, TX-01, Chip Roy, TX-21, Van Taylor, TX-03 and Randy Weber, TX-14, complained or were seen refusing to comply. Firearms are generally prohibited in the U.S. Capitol, and members’ weapons must be kept in their offices.

Metal detectors were installed at the Texas Capitol’s four public entrances in 2010 after a gunman fired shots on the building grounds. At the time, then-Governor Rick Perry and other lawmakers worried the security hurdles would make the Capitol unwelcoming to the public. At least 32 states use metal detectors in their capitol buildings, according to the National Conference of State Legislatures.

Both sides of the debate in Texas agree the current Republican-controlled Legislature is unlikely to pass sweeping gun policy changes in either the Capitol or the state, but other security updates may be on the way. The Texas Senate earmarked in its preliminary budget nearly $40 million to enhance Capitol security over the next two fiscal years, including $36.3 million for troopers and related personnel and $1.8 million for equipment, such as panic buttons, x-ray technology, video cameras and gunshot detection.

Meanwhile, gun safety proponents are focusing their energy on a bill that would prohibit displaying firearms during protests, Scruggs said.

Disclosure: The National Conference of State Legislatures (NCSL) and New York Times have been financial supporters of The Texas Tribune, a nonprofit, nonpartisan news organization that is funded in part by donations from members, foundations and corporate sponsors. Financial supporters play no role in the Tribune's journalism. Find a complete list of them here.

"Despite insurrection, there may be more guns in the Texas Capitol this session" was first published at https://www.texastribune.org/2021/01/26/texas-capitol-guns/ by The Texas Tribune. The Texas Tribune is proud to celebrate 10 years of exceptional journalism for an exceptional state.