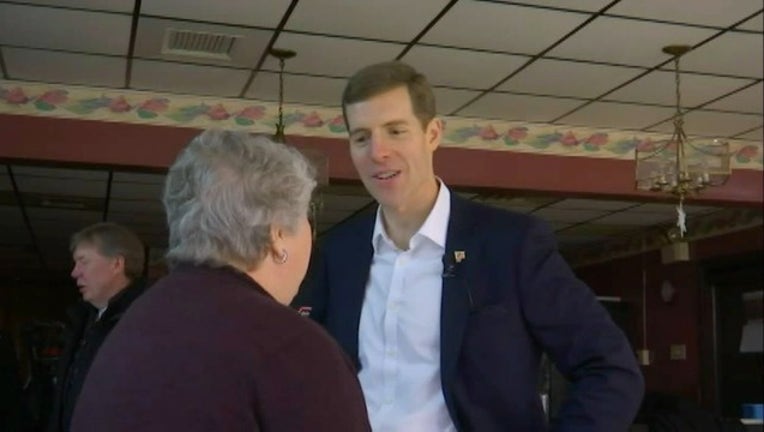 WAYNESBURG, Pa. (AP) - Democrat Conor Lamb went to Pennsylvania's coal country for help in the final days before the first congressional election of 2018, telling union members Sunday that he won't forget their support in a close race widely viewed as a key test of support for Republicans ahead of November's midterms.

Lamb's race against Republican Rick Saccone has crystallized the debate over whether a younger, charismatic Democrat appealing to win back traditionally Democratic voters can overcome a veteran Republican counting on party loyalty to carry him to victory in a GOP-leaning district at a time when President Donald Trump is pushing hard for the Republican, but remains a divisive figure.

Lamb, wearing muddy work boots, jeans and a green fleece top, told those inside a packed cinderblock building on the fairgrounds that keeping promises to fully fund labor union pensions, Medicare and Social Security is "non-negotiable." He attacked Republicans as forgetting what it means to honor a promise.

"People have paid into these programs over the course of a lifetime," Lamb told more than 300 retired coal miners and Democratic activists in Waynesburg, 40 miles south of Pittsburgh. "I do not believe, as (House Speaker) Paul Ryan does, that these are entitlements or another form of welfare."

Trump has visited the district twice - including a rally Saturday night - in an effort to buoy Republican Saccone in a southwestern Pennsylvania district Trump won by nearly 20 percentage points over Democrat Hillary Clinton in 2016. Republican groups have heavily outspent Democratic groups on the race, a sign of the GOP's fear of losing.

Polls suggest the race is effectively tied and will come down to the last-days' scramble to get voters out in Tuesday's election in a one-time Democratic bastion with a long history of coal mining and steel-making. Democrats need to flip 24 GOP-held seats this year to regain a House majority, and a Lamb victory would boost those prospects.

The seat is open after eight-term Republican incumbent Rep. Tim Murphy resigned amid the revelation that the strongly anti-abortion lawmaker had urged a woman with whom he was having an affair to get an abortion when they thought she might be pregnant.

A key difference between Murphy and Saccone: Murphy tended to have labor union support. Saccone does not.

Lamb, a 33-year-old Marine veteran and former federal prosecutor, thanked labor unions for their support and said it has helped overcome the "dark money" and negative campaign tactics helping Saccone.

"You have been the heart and soul of this campaign," Lamb told the crowd. "Our volunteers are literally running into men and women from the labor unions in our streets, sometimes at the same doorstep. ... I will never forget what you've done for me."

For Saccone, the closing argument is aimed squarely at the district's heavily Republican leanings, framing the race as a way to boost Trump and prevent national Democrats like House Minority Leader Nancy Pelosi from gaining traction.

Saccone had no previously announced events Sunday, opting instead for the local media afterglow of his Saturday night rally with Trump, who warned Pennsylvania Republicans not to be "conned by this guy Lamb" and his pitch as an independent-minded Democrat.

Despite Saccone's low profile, the national Republican machine backing him remained in full force, with ads still blanketing television screens. The Republican National Committee and the Ryan-allied super PAC - the Congressional Leadership Fund - has had staff and volunteers on the ground for weeks knocking on doors and manning phone banks.

In one heavily GOP neighborhood in Westmoreland County, east of Pittsburgh, campaign materials from the RNC and CLF hung on nearly every door Sunday.

"It's a little scary as tight as it is, but Republicans are still enthusiastic to keep this seat," said Carol Heinecke, a 57-year-old engineer. Heinecke said she's drawn to Saccone's wide-ranging resume - he is a state legislator and retired Air Force counterintelligence officer - but added that his most important pitch may be his support for the president.

"What Trump is doing is good for the country," she said, "and Rick's going to support everything he's doing."

And for Republicans who aren't full-throated Trump supporters, Saccone hews closely to GOP orthodoxy and is leaning on party loyalty. Jeffrey Snelling, a 54-year-old Republican who works in finance, says he's still skeptical of Trump's ability to govern and doesn't "know a lot about Saccone." But, as he holds a CLF campaign push card that urges him to "Stop Hillary" and "Stop Pelosi," he adds, "I'm not voting for a liberal."

At Sunday's Lamb rally, Cecil Roberts, the president of the United Mineworkers of America, delivered a rousing endorsement of Lamb, a noteworthy endorsement since the union sat out the 2016 election rather than back Clinton.

"You elect this man to Congress and you won't have to lobby him one minute," Roberts shouted, raising Lamb's hand in his. "This is a 'yes' vote!"

None of the retired coal miners and family members attending Sunday's rally said they foresaw the dying industry turning around, as Trump has pledged to do. Rather, they were focused on the pension legislation and said Lamb will be helped by his opposition to gun restrictions.

"I think the Democrats are losing touch with the working guys," said Bill Leskosky, a 59-year-old state transportation department employee who attended the rally with his father-in-law, a retired coal miner. "The gun issue for one thing is the most common thing around here."

Barrow reported from Murrysville and Trafford.