The Deep Ellum Foundation and the Dallas Police Department believe the closures will cut down vehicle-based crimes, hopefully deterring drive-by shootings, robberies and drivers going over the speed limit near crows of people.

DALLAS - Dallas police announced that starting this weekend, certain streets in Deep Ellum will be closed off after 10 p.m.

The closures were planned for this summer, but police moved up the timetable.

Starting the closures earlier in the year stems from a string of recent violent crimes in Deep Ellum, according to the Deep Ellum Foundation and DPD. Both believe cutting off vehicle traffic during this window will allow them to focus on pedestrian safety. 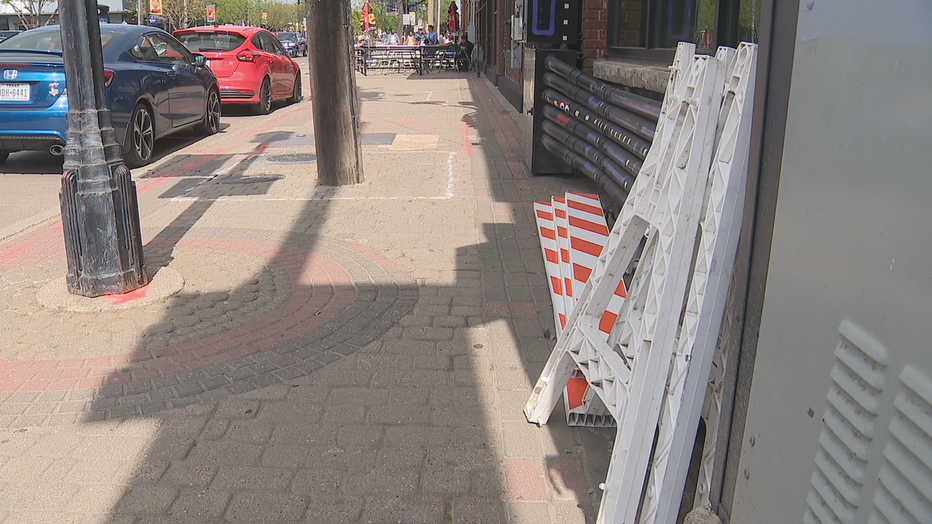 "There is a lot more than barricades than we need in Deep Ellum," she said.

Starting this weekend from 10 p.m. to 3 a.m., Main and Elm between Good Latimer and Malcolm X will be closed off to vehicle traffic.

Friday afternoon, barriers sat on the sidewalks waiting to be set up.

The closures usually begin when summer hits. Police say with warmer weather and increased crowds, the closures started earlier this year in the interest of public safety.

But most recently, this past Sunday, two people were shot following a disturbance in Deep Ellum.

Cell phone video shows customers dropping to the ground inside a Cafe Brazil while gunshots rang outside.

Surveillance video released by DPD shows the crowd scattering as possibly multiple shooters return fire near a dark truck as they run away.

Pete Zotos, the owner of St. Pete’s Dancing Marlin, told his customers early Sunday to stay inside until the crime scene was secured.

"Deep Ellum has always been on the roller coaster. So we are in the barrel. It’s our turn in the barrel," he said. "They just haven’t found the right thing to work, but they need to try a little bit harder."

At the start of Main Street is the Kettle Art Gallery. The art gallery has called Deep Ellum home for almost 20 years. Owner Frank Campanga’s shop usually shuts down before the nightlife begins but acknowledges the public’s perception of Deep Ellum is changing.

"I think just keep moving forward. Summertime is going to be crazy," he said.

A police officer will be parked at each barricade.

The Deep Ellum Foundation and the Dallas Police Department believe the closures will cut down vehicle-based crimes, hopefully deterring drive-by shootings, robberies and drivers going over the speed limit near crows of people.

"We shouldn’t have to get used to something like this when gun violence is everywhere and right here in our community," she said.

The Deep Ellum Foundation says it will be reevaluating the closures on a weekly basis to make sure businesses have minimal impacts.