Teachers and staff at Medrano Junior High in Dallas ISD stepped up in a big way to help feed students and their families after the winter storm.

DALLAS - Teachers and staff at Medrano Junior High in Dallas ISD stepped up in a big way to help feed students and their families after the winter storm.

They raised thousands of dollars to buy their families food and supplies. But it's just the latest in a series of challenges for Medrano's staff.

Teachers and staff pulled the idea together quickly and in just two days and raised roughly $10,000 to feed students and their families.

The families at Medrano Junior High have been through a lot in recent years: coping with the tornadoes in October 2019, the ongoing pandemic and now a winter storm disrupting classes for more than a week. 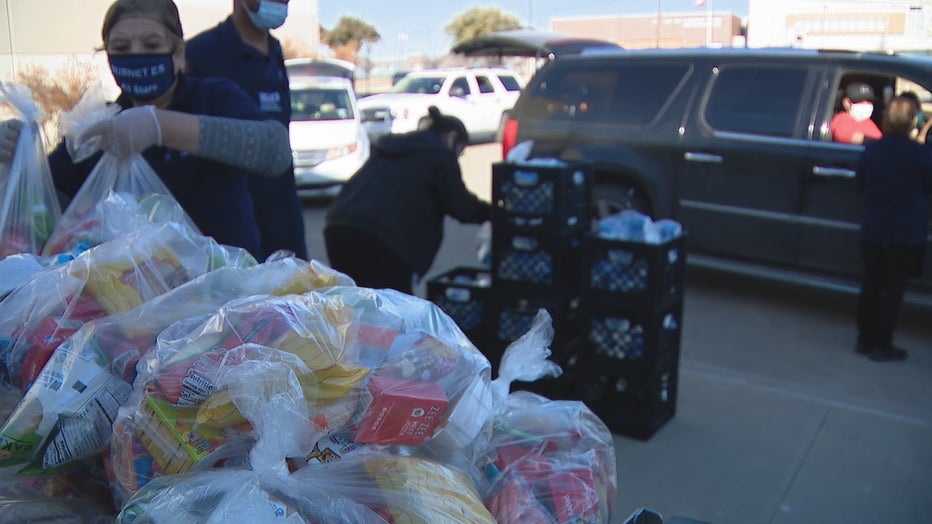 "It’s heartbreaking. It’s very frustrating because at Medrano," said teacher Marisa Swanson. "Our kids are fantastic. They’ve been through so much, and it feels like every year we just kind of keep getting hit."

Though the school building itself only sustained a minor leak from the storm, their families were hit much harder over the past week.

"Each day, over half of our families didn’t have power up until Friday," Swanson said. "Many of them still don’t have water. Several of them, their rooms or apartments or houses flooded. A lot of them moved into hotels which also lost power."

Toward the end of the week, families had run out of food and started asking for help.

"Our students, a lot of them get their main food access from our free breakfast and lunch program," Swanson said. "And so when they weren't able to receive that for a week and when the district food distributions were delayed, we knew this was something we had to figure out a way to assist our families with as soon as possible."

Staff raised $10,000 in just two days while many staff and teachers were dealing with struggles from the storm themselves.

"Our donations came from them, their friends, their family, them reaching out," said Asst. Principal Beth LaPla. "One of our teachers, she had her own home flooded during the power outages and yet she was there today serving our kids."

"Donors came not only from the Texas area, we also received donations from people who were in California and Florida," said After School All Stars Site Coordinator Wallace Wyatt.

It took at least one worry off of families’ minds.

"Realizing they may not have had a meal in a couple of days and definitely not any warm meals, it’s very painful as their teachers," Swanson said.

"That has constantly been the theme. We always see the needs of our students and do our very best to make sure they're met," Wyatt said.