The head of the Dallas Office of Emergency Management said his team is currently working with the Texas National Guard to set up a 250-bed hospital inside the Kay Bailey Hutchison Center.

DALLAS - The mayor of Dallas wants to know exactly where the city stands when it comes to hospital space.

Before Tuesday, hospitals were not required to disclose the number of available ventilators and beds. Mayor Eric Johnson is now requiring them to report the information daily so that the city can better assess the needs of the medical community and prepare for a possible surge in hospitalizations due to the coronavirus.

"Transparency and facts are key to slowing the spread of this virus. With the data that hospitals will be providing pursuant to these new orders, we can effectively manage our resources in the event of a surge in hospitalizations," Johnson said.

The head of the Dallas Office of Emergency Management said his team is currently working with the Texas National Guard to set up a 250-bed hospital inside the Kay Bailey Hutchison Center.

The facility will be run by the U.S. Navy and could be up in running within 48 hours. Initially, it will have 250 bed. But it would be able to handle up to 1,400 patients if needed. 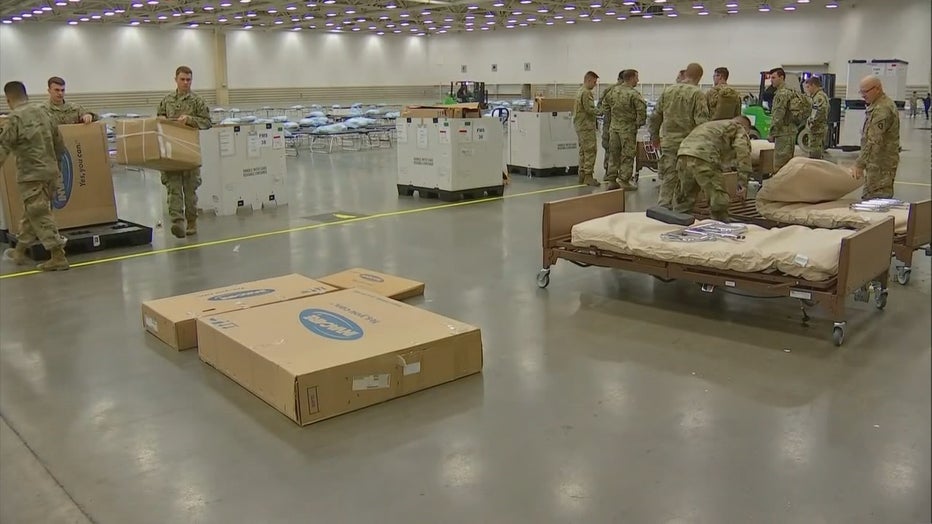 “We don't have a date,” said Rocky Vaz with the Dallas Office of Emergency Management. “We’re waiting on hospitals to tell us what is the mission and what type of patients they want to see.”

While Dallas County Judge Clay Jenkins has threatened to close the trails, Johnson on Tuesday said he does not want to close the city’s parks and trails while everyone is being asked to stay home. Instead, he’s again asking people to practice social distancing while exercising. He said he will consider shutting down some under-utilized streets so people can run along those as another option.

Johnson said shutting down trails is a step he would like to avoid unless the medical community says it is necessary.

“Not everyone lives in a single family home,” he said. “Can you imagine being in a two bedroom-apartment like I grew up in with six people in it? How crazy it might be with kids needing to get out and burn off steam?”

If that doesn’t work, Dallas will move away from warning people to issuing citations and fines of up to $2,000 when it comes to violating social distancing rules and operating non-essential businesses. But with the courts shut down, the city is exploring how exactly to issue fines.

When it comes to evictions, the city is also looking into what more can be done to help renters. Until then, Mayor Johnson urged landlords to “have a heart.”