As temperatures are expected to dip below freezing this weekend, multiple organizations are partnering with the city of Dallas to find hundreds of homeless people somewhere warm to sleep.

DALLAS - As temperatures are expected to dip below freezing this weekend, multiple organizations are partnering with the city of Dallas to find hundreds of homeless people somewhere warm to sleep.

"That’s what we’re treating," said Val Lopez with TxDOT. "Specifically, we’re focusing on the main arterial highways and as time allows we go on to the smaller roadways."

The Fort Worth TxDOT district is responsible for the roads in a nine county region. The Dallas TxDOT district is seven counties. When the winter weather hits, they'll have spotters and trucks on standby to respond to areas that ice up. Snow would be rare, and even a first for some.

The Texas Department of Transportation is preparing the roads against snow and ice. But there are some who are looking forward to the snow.

Trying to shelter hundreds of people safely is more challenging because of the pandemic, but organizations, like Our Calling and Oak Lawn United Methodist Church, said they’ve secured about 300 hotel rooms to shelter the homeless. 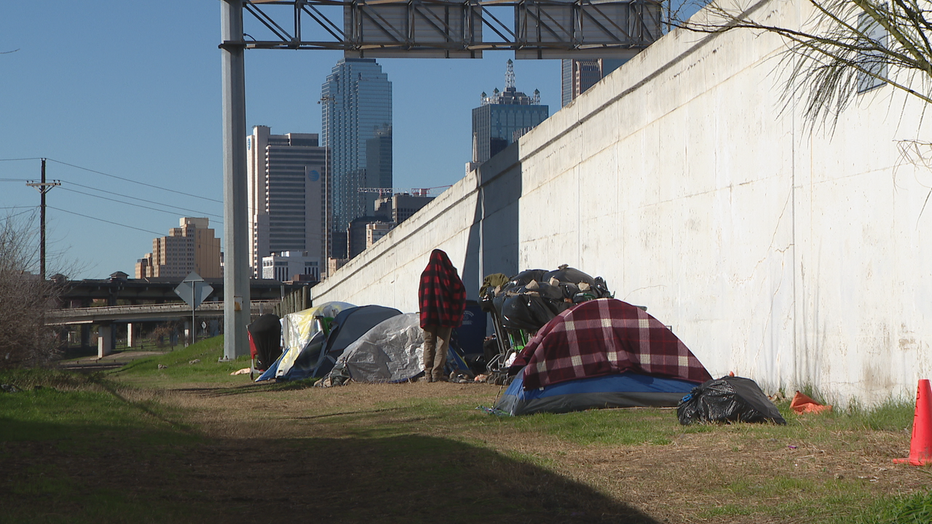 By early Friday afternoon, dozens of people were already lined up outside Oak Lawn United Methodist Church to get shelter from the cold.

Normally, they’d be sheltered inside the church, but because of the pandemic, several organizations have partnered with the city to shelter them in nearly 300 hotel rooms.

"We’re doing it in a different way this year. We’re opening the doors by putting people in vans, shuttles behind me, so we can take folks to a nearby hotel and put them up in a hotel room for the night rather than sheltering inside the church," Baughman explained.

Christopher Thompson made sure to get in line early to get a hotel room for the night.

He said he’s spent miserable nights out in the cold before and is looking forward to some warmth tonight.

But those hotel rooms are expected to fill up fast.

By mid-day, Our Calling had already registered around 200 people.

Their facility is prepared to open as an overflow shelter if necessary, despite a possible $2,000 fine from the city.

Our Calling is located within the downtown area, and the city excludes non-profit organizations in downtown from the housing the homeless

Our Calling is also in desperate need of volunteers to help, seeing a dramatic drop in volunteers during the pandemic.

"In 2019, we had almost 4,000 volunteers. In 2020, we had almost 400, a 10th of the amount of volunteers we needed. So now we’re still struggling with that. We had volunteer positions open, and yet some people are hesitant to sign up," Walker explained.

In addition, Our Calling has outreach teams that were out all day Friday, driving around looking for people on the streets and trying to convince them to get inside for the night.

Our Calling expects to open their doors for overflow at some point this weekend depending on the weather.