A Dallas police officer who was critically injured in the line of duty was honored by the department for his courage in overcoming his injuries and returning to work. He wasn't expected to live after his 2018, but he's a prime example of someone who doesn't give up.

DALLAS - A Dallas police officer who was critically injured in the line of duty was honored by the department for his courage in overcoming his injuries and returning to work.

In 2018, the officer was outside his cruiser working a traffic accident when another driver hit him. He is still recovering but continues to work for the department.

Dallas Police Officer Brannon Barber wasn't expected to be living today following his 2018 accident while on duty. On Tuesday, he was given an award for his bravery. He is a prime example of someone who doesn't give up.

"My injuries were so traumatic, the doctors told my parents and the department I would not be able to survive," he recalled. "And if I did survive, I would live in a 24-hour adult healthcare facility in a vegetative state." 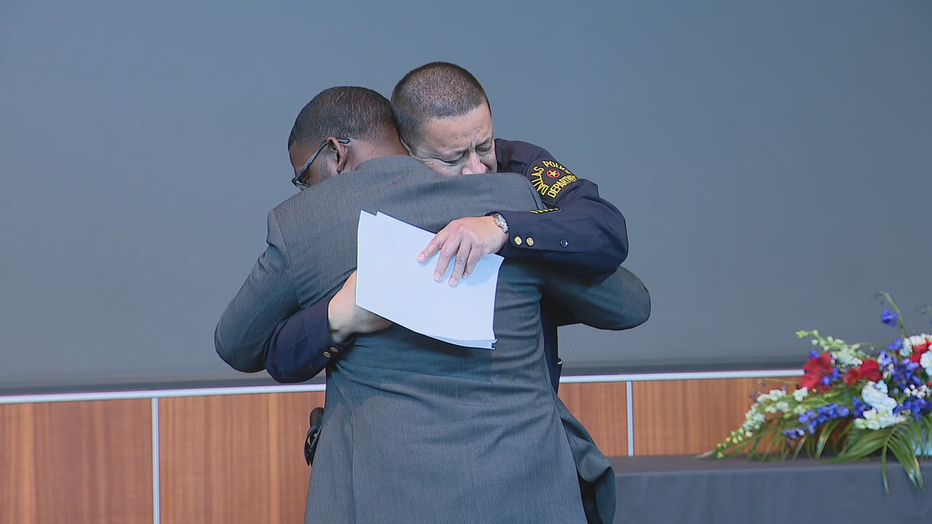 Early in the morning on Oct. 21, 2018, Barber was working a traffic accident on I-20. He was outside his squad car putting out flares when police say Boniface Madubuko drove around the traffic markers and hit him. He was arrested and charged.

Barber was critically injured. Four years later, he is still an officer and is working in the records division.

Tuesday, Barber was presented with the Theodore Roosevelt Association Award for the Texas chapter. A Dallas officer is selected annually who continues to provide praiseworthy service despite serious injury or illness.

"As a child, I knew I wanted to protect and serve my community, and I completed just that," the officer said. "Though I can no longer patrol the streets of Dallas, I am still a police officer."

Barber was supposed to receive the award in 2020, but that’s when the pandemic hit. The life-altering incident came at a time when the Dallas Police Department lost multiple officers.

"I can’t tell you personally how wonderful it is, Brandon, to have you stand up, hear and read because we didn’t see that, that night. After everything we had been through," he said.

Barber says he takes nothing for granted as he lives what he calls his second opportunity to live.

"Life is not always about winning. It’s about when you are faced with adversity and how you overcome those adversities," he said. "My life goal now is to take advantage of my second opportunity to live."

The man police say hit Barber will appear in court next week. His trial is to start May 12.