It’s about four years late, but the Margaret McDermott Bridge in Dallas is finally safe and open to pedestrians and bike riders.

DALLAS - It’s about four years late, but the Margaret McDermott Bridge in Dallas is finally safe and open to pedestrians and bike riders.

The Margaret McDermott Bridge is one of two Dallas bridges designed by the internationally renowned architect Santiago Calatrava.

For years, it has only been open to Interstate 30 traffic.

The bike paths along the side of the bridge were expected to open in 2017, but never did because of concerns that wind could cause the cables and anchors to fail. 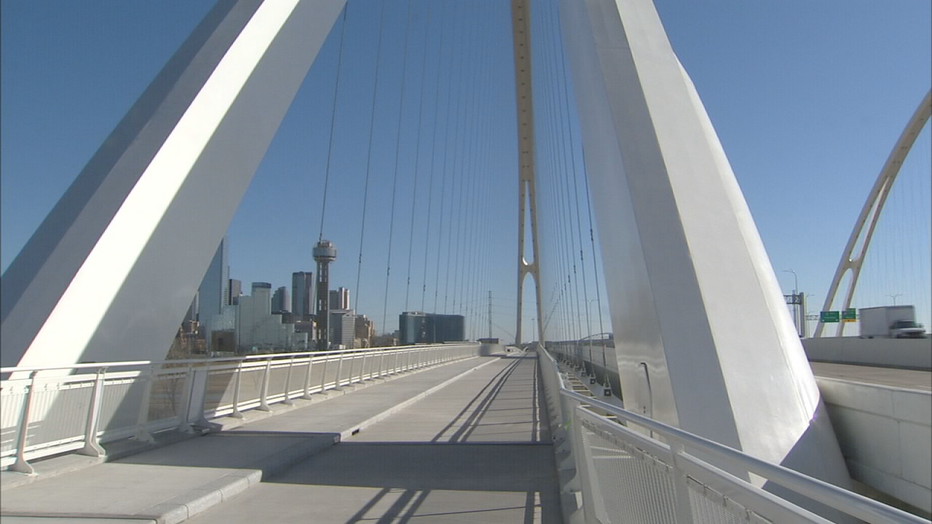 After some finger-pointing about who was to blame for the safety issues, the Dallas City Council agreed to pay for the repairs.

It spent $7 million to replace the bridge’s cable anchor system.

On Thursday, Dallas city leaders will celebrate the opening with a ribbon-cutting and fun run, giving riders and bikers a chance to cross the bridge for the first time.

"City of Dallas, we are known for our skyline. It is forever changed because of this bridge," Dallas Deputy Mayor Pro Tem Adam McGough said.

"It's been changed, so there's equal access for everyone here and we have these awesome bike and run lanes," Dallas County Judge Clay Jenkins said.

After the cost of the bridge ballooned from $74 million to $100 million in 2013, the assistant city manager at the time told council members the city was working with the contractor to save money by "value engineering."

One of the big issues came down to stress testing the cables and rods.

To save $30,000, city staff authorized skipping that step.

And in 2019, council authorized a $7 million payment to replace the cables.

"It's one of those things where you've already put so much money in, you have to finish it," Dallas City Councilman Lee Kleinman said.

"Seeing this, how beautiful it is, not being able to run it, it's a tease for four years," runner Robert Diggles added.

Councilman Chad West said the city has not given up on trying to get the responsible companies to reimburse the city.

"We needed to figure out our total cost," he said. "Now that we are done, we can go after the responsible parties and we need to do that."

While the bridge's namesake, philanthropist Margaret McDermott, did not get to see this day, her granddaughter said she would be proud.

"One of the times she smiled the biggest was when she was on this bridge," Grace Cook said.

Several years late and millions of dollars over budget, a bridge in Dallas is finally finished. The bike and pedestrian lanes on the Margaret McDermott were set to open in 2017 but never did because of safety concerns.