A third teenager has been released from the hospital after a hit-and-run crash that killed two teens last month in Dallas.

DALLAS - A third teenager has been released from the hospital after a hit-and-run crash that killed two teens last month in Dallas.

Police said a driver in a truck slammed into the teens’ SUV in a head-on crash.

The driver of the pickup has been identified as Faustino Rivera.

Investigators said he ditched the truck and took off on foot without checking on the injured teenagers.

Siblings, 16-year-old Crystal Pineda and 15-year-old Andres Pineda, who were both killed.

He had a longer stay due to surgery to his hip and arm. 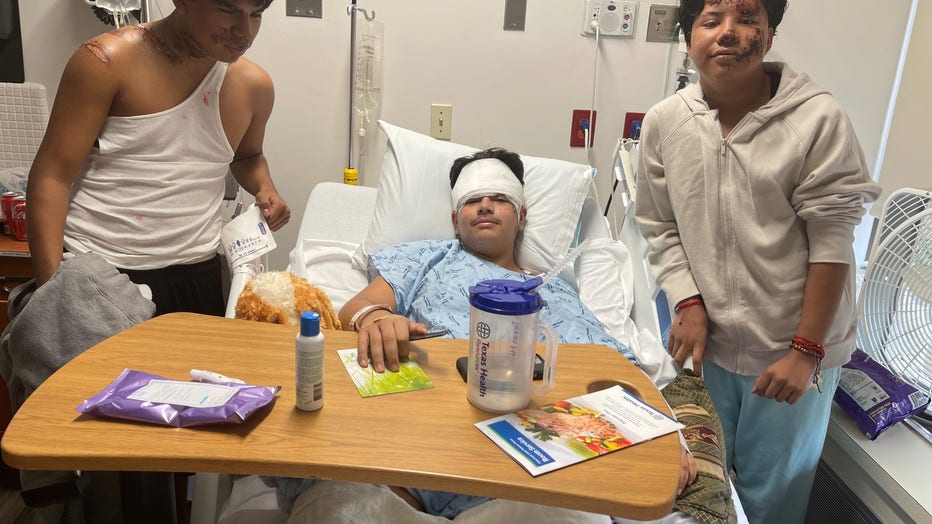 "All this has felt like a dream, it’s just weird," Olvera said.

He’s still processing his new reality after being temporarily bound to a wheelchair while grieving the loss of his two friends.

The 15-year-old JJ Pearce High School freshman has a fractured hip and broken arm and scrapes all over his face.

Diego and two other passengers in the backseat survived the crash.

In the front seat, Crystal and Andres Pineda were both killed.

"They were amazing. It’s weird to say they are gone and not here with us no more," Olvera said.

Dallas police said Rivera was speeding and going the wrong way down Esperanza Road on April 29 when his maroon truck slammed into the SUV full of teenagers.

All five friends were on their way to grab tacos.

Olvera, who was sitting behind the driver’s seat, recalled the last thing he remembers before he went unconscious.

"I remember yelling out in Spanish, ‘Help, help us. My leg is broken,’ and just yelling," he said.

But police said Rivera never stopped to check on the teenagers.

Instead, he got out of the truck, took off on foot, and hasn’t been seen since. Witnesses rushed to drag the injured teenagers out of the vehicle.

"The seat bounced back and broke my hip. My knee absorbed it, but my hip couldn’t," Olvera said.

Meanwhile, the lives of four families are now forever changed.

For Olvera, it could be months before he can walk normally again. He’s still angry each day passes by without justice.

"I hope that they find him and he gets locked up for life," he said.