Last month's flooding damage in Dallas County wasn't enough to qualify for federal grant money to help victims rebuild, but those who need the help may still be able to get cheap loans to rebuild.

But those who need the help may still be able to get cheap loans to rebuild.

Some people in the area said they're struggling to figure out how to fix the damage.

But many homeowners said they can’t keep waiting, and have been working on rebuilding their lives for weeks.

Trash is also piling up on Villas’ street for the past three weeks.

From sun up to sun down, she and her husband have taken on the task to fix their flood damaged home themselves.

The Balch Springs couple does not have insurance.

"We still have to put the floors, the trims," Villas said.

Back on August 22, a historic flood forced homeowners in some Balch Springs neighborhoods to evacuate.

Some residents were trapped and had to be rescued from high water.

Once the water receded, the Villas started to rebuild and haven’t stopped since, but they are now swimming in debt.

"It feels like everyone’s lives went on, and our lives froze. We have been stuck here," Villas said. 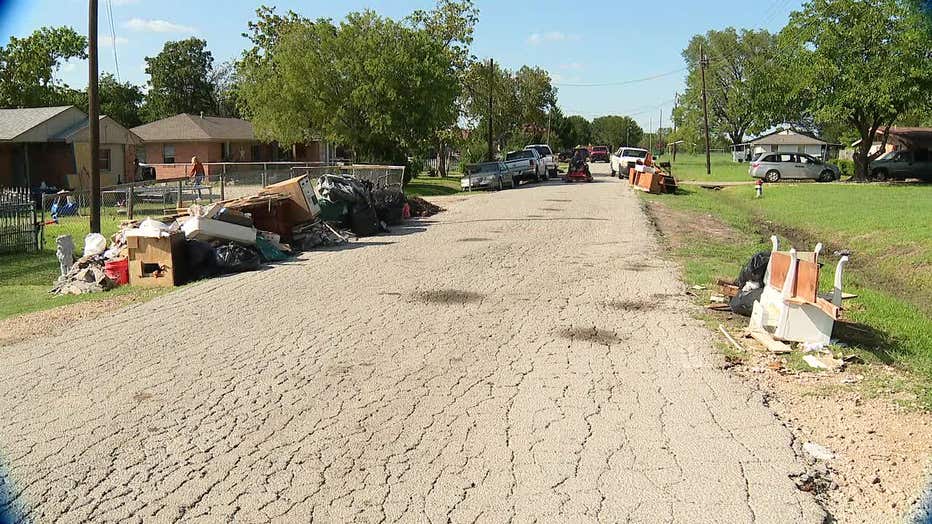 "Throughout the entire state of Texas, we had only 70 homes destroyed or major damage. Majority were in Dallas County," Dallas County Judge Clay Jenkins said.

Despite the name, the SBA also provides low-interest disaster loans to homeowners.

Governor Greg Abbott issued a disaster declaration for 23 counties to try and qualify for FEMA assistance, but Judge Jenkins said the FEMA threshold for uninsured losses was not met.

"We all after listening to the state, and FEMA agreed SBA is the route to go," Jenkins said. "I am disappointed we can’t get individual assistance for the people who were affected and only getting these low-interest loans for them."

If approved, Jenkins believes people will be on the ground processing the low-interest loans within the next week.

But some aren’t waiting around.

Oscar Rodriguez has been putting in some work, still waiting for a final estimate from his insurance.

His home of 21 years is now totally gutted.

"Everything in the house is no good," he said.

Across the street, the Villas want to hit the halfway mark this weekend to hopefully have some sense of normalcy.

"We had to cut our sheet rock down. This side of the house hasn’t been touched," Villas said. "We had to get started. We have three kids we need to bring back home."

If Dallas County gets approves for these SBA low-interest loans, anyone who has flood damage from surrounding counties, like Tarrant, Ellis, or Collin counties, they can qualify as well.