The Dallas City Council reviewed plans for the ambitious $100 million expansion of Klyde Warren Park. The price tag might include $40 million in public funding.

DALLAS - The Dallas City Council reviewed plans for the ambitious $100 million expansion of Klyde Warren Park. The price tag might include $40 million in public funding.

Klyde Warren Park 2.0 would do more than add green space. It would set a precedent for putting a building over a freeway and potentially changing development as we know it.

The plans for Klyde Warren Park 2.0 are eye-catching. They call for expanding the renowned deck park an acre and a half to the west and a futuristic two-story building on top of Woodall Rodgers Freeway.

A building on top of a freeway in Texas has never been done before. The building itself would have a 35,000 square foot rooftop deck on top.

Rob Walters with the Woodall Rogers Park Foundation says what will go inside the building is still a work in progress.

“The building will be totally public,” Walters said. “What we would like to is have a Dallas visitors center of some kind where more come down to city arts district and get a glimpse of Dallas.” 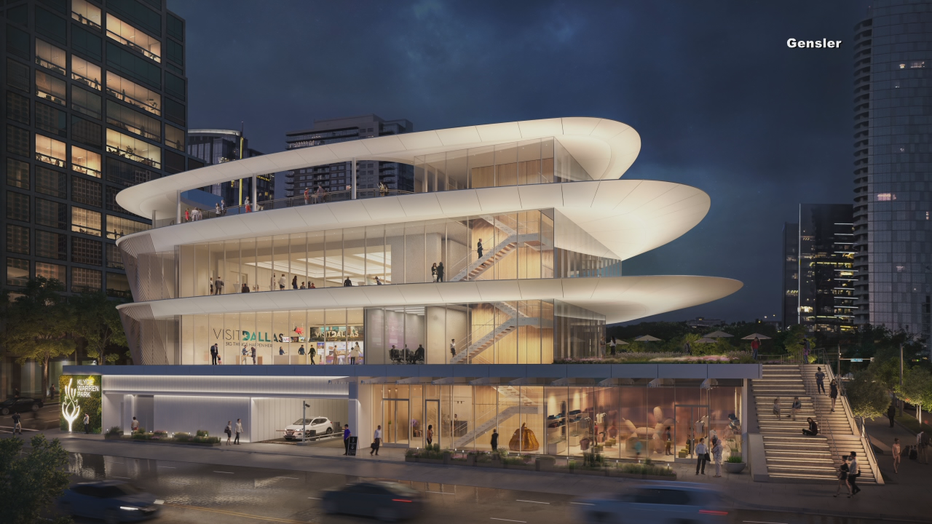 The second floor would have rental space for things like weddings, family reunions and exhibits.

Michael Morris, the Transportation Director for North Central Texas Council of Governments, said the ability to put a building on top of a freeway would be revolutionary.

“To a large extent, it is a game-changer,” he said. “Dallas-Fort Worth is saying we are using this tool.”

Morris said the tool is needed because of the rapid growth Dallas is experiencing.

“If we weren’t growing a million people a decade and have been since 1960, this wouldn't be an important conversation,” he said.

“I know it is not a popular topic right now, but it was very definitively said to me VisitDallas is going to office out of there,” Bazaldua said.

“They would like to operate ‘Experience Dallas’ out of that building. Truly, a visitors’ center. High tech. High touch. Similar to a sports facility at Stanford University,” Walters said. “We think this would be the highest and best use.”

Walters said if the city does end its contract with VisitDallas, it would seek out a different tenant for the building.  The proposal to expand Klyde Warren Park will go to the full city council for approval at a later date.