Dallas police are looking for a man who they said physically assaulted another man, before crashing into a row of cars while trying to drive away.

DALLAS - Dallas police are looking for a man who they said physically assaulted another man, before crashing into a row of cars while trying to drive away.

It happened at an apartment complex in the Design District, northwest of Downtown Dallas.

"There was pieces of my car just kind of scattered all over," Laith Ghonim recalled. "There’s really no words."

It was not a pleasant scene to wake up to for Ghonim, who received a call from his leasing office Tuesday morning.

"And they were saying, ‘Oh, your vehicle has been associated with an accident,’" he said.

But it wasn’t just any accident.

"Playing bumper cars in the garage, just hitting each other," he said.

His 2019 Toyota Corolla was one of four vehicles that Dallas police said was damaged during a "major disturbance" at Camden Design District Apartments. 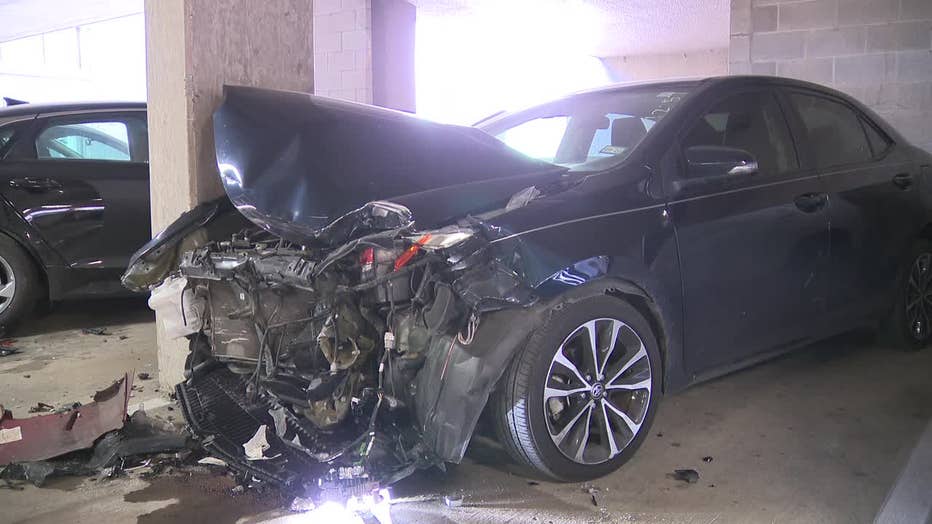 "But essentially, I just walked up to the garage and it was just kind of chaos," Ghonim recalled.

Police said a man was physically assaulted by another man at the complex.

During an attempt to get away, he got into his vehicle and sped off, but collided with four unoccupied vehicles.

"You don’t expect that type of accident," Ghonim added.

Ghonim and other neighbors said the two men involved in the assault live together. They said it was the assault victim’s car that hit four vehicles in a row.

They said the suspect then added to everyone’s damage before driving off.

"One car, running from his significant other, drove into my car, and then that car reversed into his, both colliding, double impact into mine," Ghonim said.

Multiple neighbors told FOX 4 they’ve reported past violence between this couple to apartment management, but it’s never been this bad.

"Maybe if this was something that was handled, or if there was like a security guard in the garage, it could’ve been avoided," Ghonim said.

He also said he cannot release any information regarding residents.

"They came directly into my car, not only hitting once, but twice, and a third time as well," Ghonim said.

Police are still looking for the suspect. They have not released his name.

Ghonim believes insurance will help him into a new ride.

"They said this is a total damage, there’s no way to fix your car," he said.

For now, he wants to shed light on a crazy crash he wishes could’ve been avoided.

"Although I’m upset about my vehicle, I think a lot of the neighbors are more upset about the situation in its entirety," he said.