A judge denied the defendant's motion for a reduced bond for James and Jennifer Crumbley, meaning they'll each remain in jail on $500,000 bond.

(FOX 2) - James and Jennifer Crumbley will remain held on a $500,000 cash bond, an Oakland County judge ruled, on manslaughter charges connected to the Oxford High School after a judge ruled they were a flight risk.

The Crumbleys are both still being held on a $500,000 cash/surety bond after they were each charged with four counts of involuntary manslaughter days after their son was arrested for allegedly shooting several people at Oxford High School on Nov. 30. Four students died in the shooting and 7 others were seriously hurt.

Their son, Ethan, was charged the day after the shooting and was in court earlier in the day Friday on his charges where he waived his preliminary hearing and will proceed straight to trial.

The judge in James and Jennifer's case rejected the argument presented by attorneys Mariell Lehman and Shannon Smith that the Crumbley parents had enough ties to the community that a reduced bond to $100,000 would be enough to keep them in Michigan.

During Friday's bond hearing, the Oakland County Prosecutor's office unveiled several items that had previously not been revealed before, which included that the Crumbleys withdrew thousands of from several bank accounts, including Ethan Crumbley's.

Ethan Crumbley, the 15-year-old charged with shooting and killing 4 students, waived his preliminary exam. Meanwhile, his parents, James and Jennifer, were also in court for a bond hearing where explosive details were released.

Smith and Lehman filed a motion in December for a reduced bond and said that, in response, the prosecution made a number of false and misleading statements connected to the case, including allegations of extramarital affairs.

Smith argued that this was done with intent to create a conflict between the parties and that the allegations did not fall under the scope of the search warrant that investigators had obtained. Additionally, Smith state that Ethan himself acknowledged that James hid the recently purchased 9MM, which she said proves that the gun was not freely accessible.

"Secondly your honor, in Ethan's journal which was provided in discovery, he explicitly states that he has to 'find where his dad hid the firearm.'" Smith said. "This statement, in Ethan Crumbley's own words, is contrary and false to the misleading assertions that have been made by the prosecution in this case. The assertion that the firearm was made freely to Ethan Crumbley."

She said this is contrary to misleading assertions made by the prosecution and that the Crumbleys should not be held responsible for their son's actions.

Lastly, she argued that the parents were unaware that Ethan was reportedly torturing animals, which allegedly including keeping a bird's head in his jar in his room for several months.

Prosecutor Karen McDonald spoke next, detailing that the bond should remain at a half of a million dollars for each as she stated that both could leave the state. McDonald said James worked as a Doordash delivery driver and Jennifer had been terminated by her employer.

She also said that both of their families live in Florida and the only familiar tie southeast Michigan is their son, Ethan, and they started making plans immediately after the shooting.

"On Nov. 30, just hours after their son murdered children in a school, they started making plans." she said. 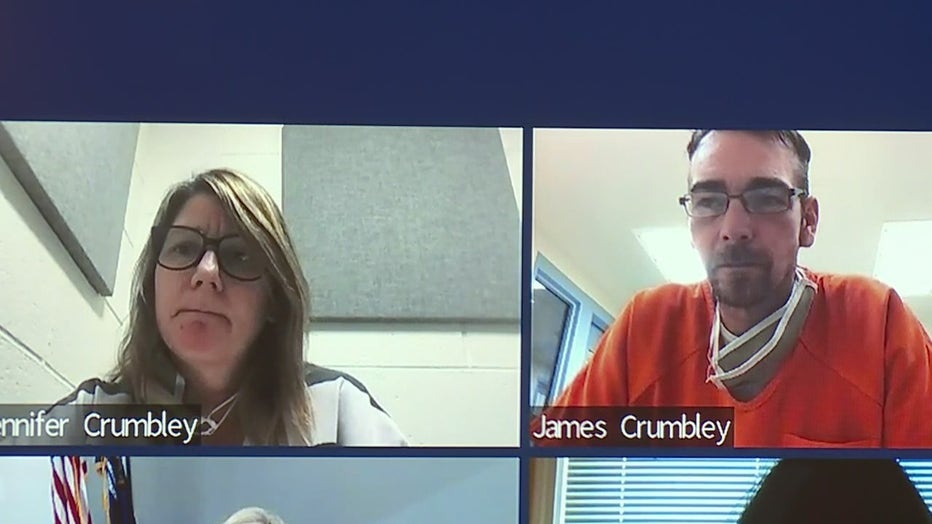 James and Jennifer Crumbley appear for a Probable Cause Conference on Friday, Jan. 7 in charges connected to the Oxford High School shooting.

The next day, Dec. 1, they checked into a different hotel where more contacts were made discussing the sale of their horses and withdrew $2,000 from their bank and then checked out of the hotel they were staying in, leaving one of their cars behind but parked so that the license plate could not be easily seen.

That's the day McDonald said they drove to the art studio in Detroit and never left except to smoke and to move the car so that the plate was not easily visible. While in the building, they texted with the owner that they needed provisions including socks and bedding items.

Meanwhile, their attorneys said that they believed the Crumbleys wouldn't have paid them if they had planned to run.

While inside the building, the doors were locked, even as police arrived and announced that they were there. They were found crouched behind a locked down where police took them into custody on Dec. 4.

When they were arrested, McDonald said they had Jennifer's social security card, more than a dozen credit and gift cards, cell phones, and $6,600 in cash.

"Your honor, these are not the actions of individuals who wanted to turn themselves in. They had knowledge of the pending charges based on their text messages and what did they do? They didn't go across the street,. There was a police station across the street from their hotel. There was nothing preventing them from staying right there," McDonald said.

She then handed it over to assistant prosecutor Marc Keast, who declared the case to be a strong one and that the Crumbleys will be convicted.

"The evidence will show that Ethan Crumbley was gravely troubled. He was fascinated with firearms, he was violent, he displayed terrifying tendencies and behaviors, and he literally sketched out what he planned to do in his journal and his drawings."

Keast stated that Ethan ‘gravely troubled’ and had asked for help from his parents in the past,

"As far back as March of 2021, he would text Jennifer that he thought there was a demon, ghost, or someone else inside the home," Keast said it would sometimes take hours for Jennifer to respond.

In May, Keast said Ethan was killing animals at their family home shot video of his acts. He also said that Ethan researched school shootings so much, he got spam ads regarding his mental health. Keast said he was also fascinated with Nazi propaganda and had even purchased a Nazi coin on Amazon.

While repeatedly telling his parents he was hallucinating and demonstrated a passion for only one thing - guns - Keast said his parents did not intervene or seek help. In August of 2021, he sent a video to his "only friend", Keast says, that showed him holding James' gun and saying "it's time to shoot up the school jk jk jk."

On Nov. 26, James bought the gun with Ethan by his side as a Christmas gift, Keast said, but they failed to secure it and even gave inconsistent statements about how secure it was, all while Keast said he was planning his actions.

Between that Friday and Nov. 30, Ethan recorded videos of what he was planning to do and stopped doing school work, Keast said. He was reportedly surprised that his parents didn't notice or care.

A new court filing shares details about the mindset of alleged Oxford High School shooter, as well as information about his parents.

On Monday, Nov. 29, he was caught by teachers researching ammunition in class. The school called Jennifer and left a message. Instead of calling them back, Keast said she texted Ethan and ended it by saying "don't get caught".

The next day was the day of the shootings. That's when teachers found drawings that Ethan allegedly made and called in the Crumbley parents for a meeting. Keast said they refused to take Ethan out of school and also refused to ensure that the 9MM was secured in their home, which Keast said was ‘just down the road’ from the school'.

Keast said Jennifer's employer would have ‘gladly’ given her the day off and she didn't have any meetings scheduled that day. He also said that James could have done his Doordash job with his son.

As the meeting wrapped up, Keast said Jennifer ended by asking ‘are we done here?' to which the counselor gave them 48 hours to seek help or Child Protective Services would be called.

After Keast finished, Smith asked for a rebuttal and argued that the family only left their home after the shooting for their own safety.

"Prior to being charged and arrested they had received and been made aware of a plethora of threats to their lives and their safety. They had to leave their home," Smith said. "The sale of their home has been necessary as it is no longer a safe location for them to live but it has nothing to do with a flight risk"

The judge, however, was already convinced of the prosecution's argument and said because of the lack of connections to the area, lack of turning themselves in, and because they were hiding in an art studio in Detroit, bond would remain at $500,000.

A preliminary hearing is set for February 8.