A Crowley mother is charged with injury to a child after being accused of faking her young son's illnesses.

CROWLEY, Texas - A Crowley mother is charged with injury to a child after being accused of faking her young son's illnesses.

Detectives say her lies ended up with her 1-year-old son undergoing invasive medical procedures. The child spent three months at Cook Children’s and other medical facilities. 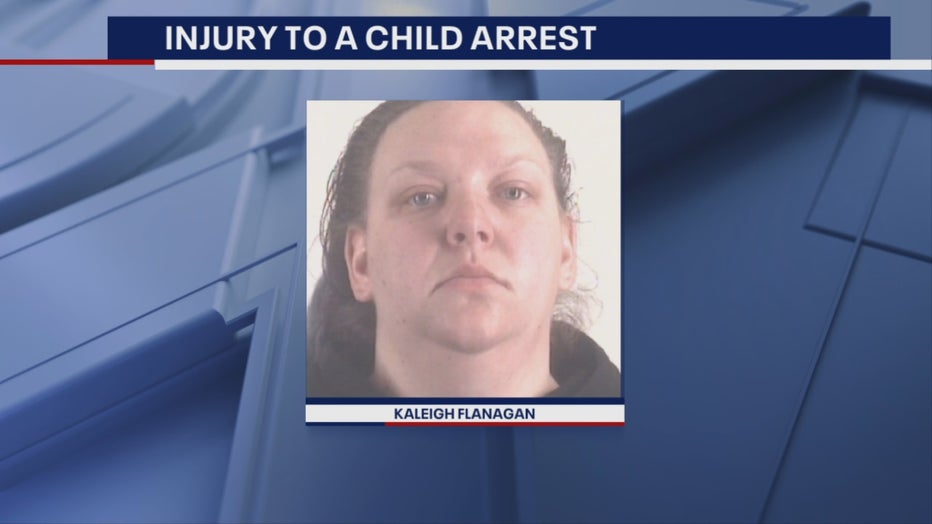 The sheriff’s office says the boy’s mother claimed to be a pediatric nurse and insisted her son suffered from reflux and repeated seizures. He underwent several tests and had a painful feeding tube inserted multiple times. All of it happened before his first birthday.

Flanagan is charged with felony bodily injury to a child. Investigators say she lied about her baby son’s medical history, leading a nurse at Cook Children’s Medical Center in Fort Worth to unnecessarily insert a painful nasal-gastric feeding tube.

The child was admitted to Cook Children’s back in early December when court documents say Flanagan complained of her son having frequent seizures.

Flanagan told doctors that her son had a history of "reflux, seizure disorder, Von Willebrand Syndrome, constipation, and a milk allergy." His neurologist ordered some tests and prescribed anti-seizure medications.

In January, detectives say Flanagan complained her son was not tolerating medication, and a nurse inserted a feeding tube.

Prior to that, nurses had reported the boy tolerating feeding and medication just fine. And over the weeks, there had been no sign that the boy was having seizures.

In February, a doctor moved the boy to another room with surveillance camera. The camera caught what appeared to show Flanagan faking her son’s vomiting.

According to the affidavit, the camera caught Flanagan on one occasion "using a paper towel to place a liquid substance on the suspect’s shirt." She then "goes back to the crib, picks up the victim and walks into the hall to report the victim had vomited."

The affidavit also says Flanagan later lied that her son had a seizure. The camera showed the boy sleeping peacefully, then woken up by his mother and then put back in the crib before she claimed he had a seizure.

Flanagan later admitted to detectives she had lied about her son’s vomiting but insisted she had witnessed at least one seizure. She later admitted she "had made mistakes" regarding her account of her son’s medical history.

Flanagan’s three children are now in foster care. The Texas Department of Family and Protective Services is investigating the allegations.

The baby just turned 1 two weeks ago. His foster family says there have been no signs of reflux or seizures.

CPS says there was no previous history with Flanagan or her children.