A Corsicana ISD administrative assistant wants to thank her coworkers for saving her life. She collapsed during a meeting and had no pulse, but her colleagues knew exactly what to do.

CORSICANA, Texas - A Corsicana ISD administrative assistant wants to thank her coworkers for saving her life.

She collapsed during a meeting and had no pulse, but her colleagues knew exactly what to do.

Kimberly Wells-Baker saw a rainbow as a sign that morning on Aug. 31 but had no idea what was about to unfold.

Fortunately for her, Corsicana ISD had moved its safety meeting for the week's football game up a day because of a schedule conflict. That put all the right people in this room. 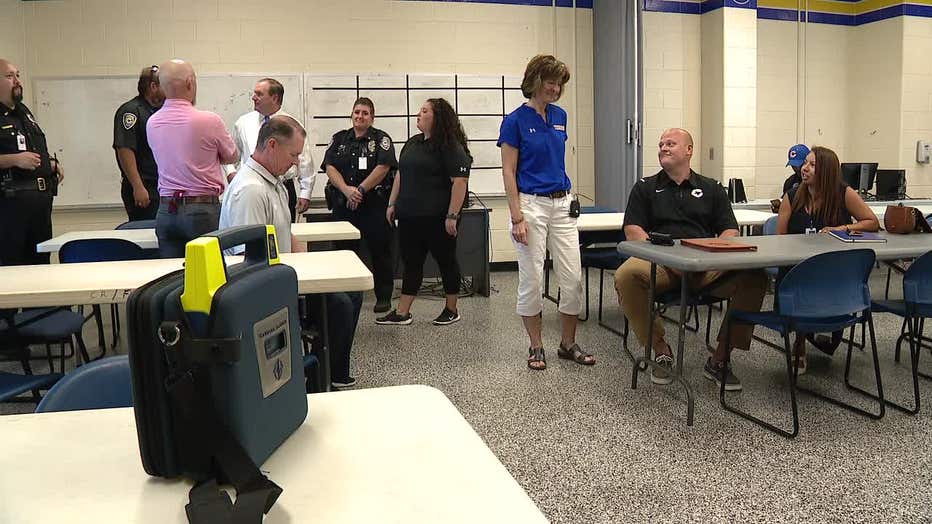 One of them was Adam Walthall, a multimedia specialist who 20 years ago was an EMT.

"All of a sudden, we looked over, and Kim had fallen to the ground," Walthall said.

Walthall checked for a pulse, but she didn't have one.

"Once we confirmed we had nothing, it was just training from 20 years ago kicked back in," he recalled.

Corsicana ISD Police Officer Todd Teetz ran outside the meeting room where he knew that 20 yards away an AED was located right inside this office. And that is what saved Wells-Baker’s life.

"As soon as he got back, he applied the AED pad," Walthall recalled.

Walthall and athletic trainer Tara Humphrey teamed up for CPR.

"It is just instinct," she said. "You don’t think about 30 compressions, two breaths. You just do it trying to save someone’s life."

Wells-Baker was diagnosed with a heart condition in May and received a heart monitor. It showed her heart had stopped for four and a half minutes.

That’s why the CPR that kept blood flowing while her heart was stopped was so critical.

"I did not wake up from any of this until I was at the hospital," she recalled. "They all told me I was a miracle that the people in this room absolutely saved my life."

Last Friday was Well-Baker's first day back to work following the August incident.