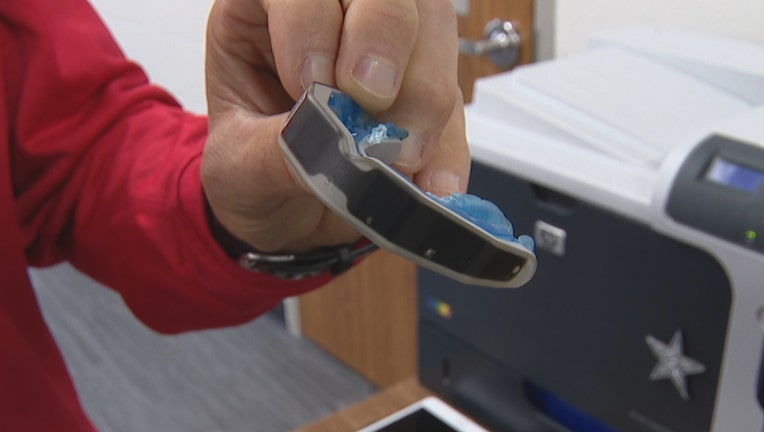 Football is a way of life in Texas. It’s why the race is on to make the game safer.

Coppell High School hopes to be a front runner in the effort. Their booster club paid about $150 per mouthpiece that is equipped with technology that monitors how hard of a blow a player took.

With the new technology, Head Coach Mike Dewitt says he can see which players had impacts and how many per game and for the season as a whole. He says the biggest benefit is the ability to see when impacts are happening the most so he can modify practices and drills.

“If we're doing something in practice that's detrimental, I want to know that,” he said. “This is a way for us to make the game safer.”

Coppell High School hopes to be a front runner in the effort. Their booster club paid about $150 per mouthpiece that is equipped with technology that monitors how hard of a blow a player took.

Nicholas Quilans is a senior offensive lineman at Coppell High School. He says he's glad to know the hits he takes can be tracked with actual data.

“When they first told us about it, I thought it was pretty weird having a mouthpiece that can measure how hard you hit,” he said. “They changed the rules a lot to make it safer for players. I think this could help them set even more rules so it could be safer for us.”

Dr. Shane Miller is a sports medicine physician at Scottish Rite Hospital in Frisco. He says there is still a lot to learn about using sensor technology to monitor players, but he believes it is a step in the right direction.

“I don't want parents to have a false sense of security,” he said. “This is not a concussion detection device. You still need to rely on trainers and medical personnel to help identify this. But the technology does have the potential to impact player safety if used correctly.”

Dr. Miller says sub-concussive impacts may be more harmful than an actual concussion, so this type of technology helps monitor an athlete over time.