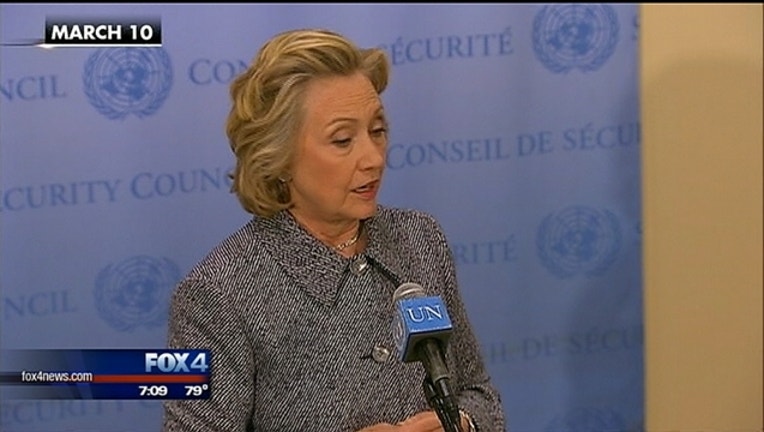 Clinton spoke privately with members of the group's Boston and Worchester, Massachusetts, chapters for about 15 minutes following an event focused on drug addiction. The activists initially planned to disrupt the event but did not arrive in time to make it into the main room.

Videos from the meeting were posted online by several news outlets Tuesday. The videos show the activists questioning Clinton about her role — as first lady, senator and secretary of state — in the war on drugs and policies which they say led to mass incarceration.

After Clinton encouraged the group to champion policies, activist Julius Jones accused her of "victim blaming." But Clinton pushed back, saying systemic racism can't be solved without changes in criminal justice, housing and education policies.

"You can keep the movement going, which you have stated, and through it you may actually change some hearts. But if that's all that happens we'll be back here in 10 years having the same conversation because we will not have all the changes that you deserve to see happen in your lifetime," she said.

Clinton said she wants to give people real policies to grasp onto and understand rather than asking white Americans to pay lip service to the movement.

"You're going to have to come together as a movement and say, 'Here's what we want done about it,' because you can get lip service from as many white people as you can pack in Yankee Stadium," she said. "That's not enough, at least in my book."

After the exchange, which reporters were not allowed to witness, members of "Black Lives Matter" said they had hoped Clinton would reflect more on her personal role in promoting policies that they say hurt black Americans.

"I didn't hear a reflection on her part in perpetuating white supremacist violence," said Daunasia Yancey, founder of the group's Boston chapter. "I heard a reflection on failed policy."

At a town hall Tuesday in Nevada, Clinton faced questions about so-called "Stand Your Ground" laws, and told the crowd they need to be rewritten on the state level. She called the February 2012 killing of Trayvon Martin a "knee-jerk reaction."

Clinton said many people are living with fear and insecurity, but laws that allow property owners to use deadly force against attackers who pose an imminent threat often have negative consequences.

She says the shooting death of Martin was "absolutely hard for me to understand."

More than 30 states have adopted or strengthened stand-your-ground laws since Florida expanded its law in 2005 to allow deadly force outside the home. The laws have come under scrutiny since a Florida jury acquitted George Zimmerman in Martin's shooting death.