CLEARWATER, Fla. - The odds of matching the first five Powerball numbers are 1 in 11,688,054. That ticket will win you $1 million. On the April 17 drawing, only two people in the nation hit that prize. One of them was a Clearwater City Council member.

The million-dollar ticket was bought at a Clearwater Publix. When Hoyt Hamilton came to check the numbers, his luck almost ran out.

"I handed her my two tickets; I had played Florida Lotto and I had played Powerball," said Hamilton. "The lotto ticket went through first and it dinged and it said ‘winning ticket.’"

Next, the lottery machine spit out a note saying it had won more than $600 and Hamilton had to go to a regional office to collect the winnings. The clerk handed him back the Florida Lottery ticket and threw out his Powerball ticket.

"She figured since it did not print ‘winning ticket’ on it it must not have been a winner," Hamilton explained. "She put it in the trash can, and I didn’t think anything of it at the time."

Until he got home and realized, the ticket in his hand was not the big winner. Two hours later, he was back at the store.

"I explained what was going on and asked if they’d emptied their trash yet, and they said ‘no,’ and I said, ‘Well I need to go through your trash,’" Hamilton said. 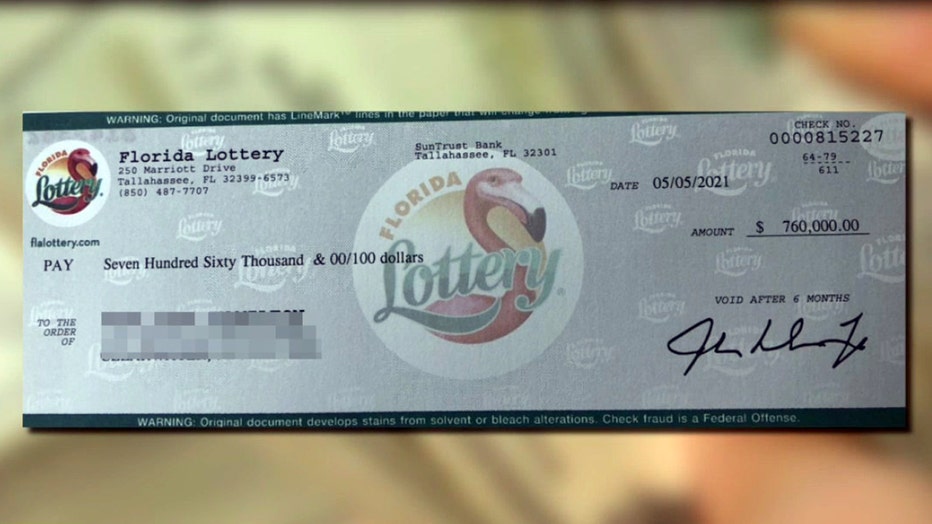 He bought two Powerball plays. The Publix workers were able to ID his ticket from the others in the rubbish because the first line was family birthdays Hamilton uses regularly.

"Still didn’t know what it was worth when he gave it back to me, not until I got into the parking lot and looked it up on my phone," he said.

Hamilton picked up his check Wednesday.  After 24% was withheld for federal income tax, he walked away with $760,000.

"My wife and I are going to establish college funds for each of our four grandkids, that’s gonna take a couple hundred thousand of it.  And the rest we’re gonna invest and have it there for when I retire and do some traveling and enjoy our later years," he added.