The fire department, along with the Texas Department of Emergency Management, started vaccinating dozens of people this week. But they say the need outstretches their current capabilities.

FERRIS, Texas - The city of Ferris is part of a new state initiative to help homebound seniors get vaccinated against COVID-19.

The fire department, along with the Texas Department of Emergency Management, started vaccinating dozens of people this week. But they say the need outstretches their current capabilities.

James Cracraft has been trying to get the vaccine for weeks but doesn’t have a way to get to any vaccination sites.

"I have no transportation. Right now, I’m without a vehicle," he said. "I know some friends were getting shots in Wilmer, but it’s just a matter of getting there." 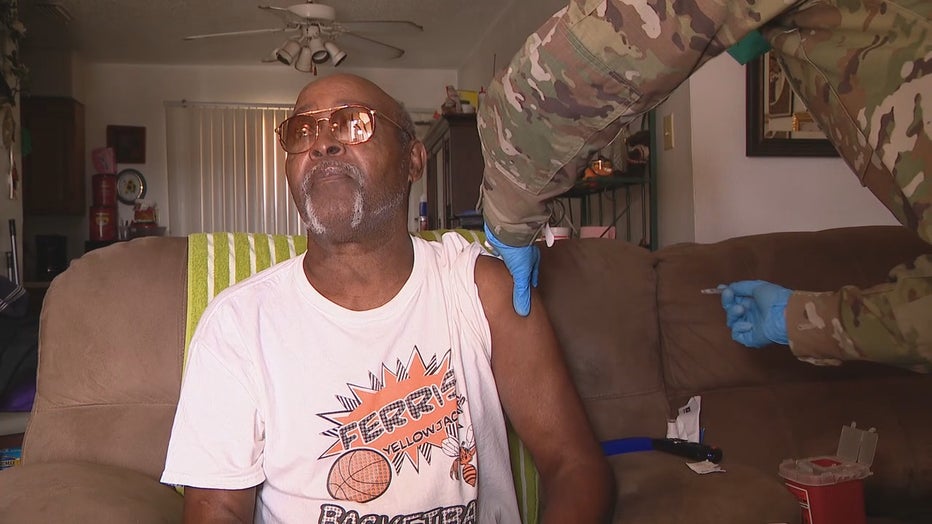 "I wasn’t anticipating being able to get one until sometime around May so it was a blessing to get that phone call," he said.

It’s a part of Governor Greg Abbott’s new Save Our Seniors program through the Texas Department of Emergency Management and State Health Services aiming to vaccinate more homebound seniors.

Ferris was chosen as the program aims to target underserved areas that may not have easy access to the vaccine.

"There’s a group of individuals that fall through the cracks here: the homebound, disabled, handicapped. There’s a need for assistance in that area, and this brings a lot to that," said Ferris Fire Chief Brian Horton.

"We were able to get some names together through local churches, through our seniors program, through Meals on Wheels actually stepped up and helped do some things," Horton said. "It was a combined effort by a lot of agencies to come together and put something like this together."

Seniors like Mack Troy Williams who also doesn’t have a reliable form of transportation and has spent most of the pandemic isolated.

"I’m glad to get this. Been going to a whole bunch of places trying to get it," he said. "Then they called me around here. I’ve been to Ennis, Fair Park. They haven’t called me yet."

For now, the program is starting out small. The city of Ferris only has 30 vaccine doses to give out but hope to do more in the future.

"There’s more needed than what we have, but we’ve got to start somewhere," Horton said. "We’ll come back together after this, brief everything, get some more numbers and go from there."

City officials say they’ve filled up their appointments for this round of vaccines but say those who are homebound can contact them to get on the list in case more vaccines become available through the program.

Homebound seniors interested in participating in the program can contact the city of Ferris at (972) 544-2110 or email GloriaPerkins@ferristexas.gov.