NBA superstar LeBron James reflected on Kobe Bryant one year after his death following the Lakers win over the Chicago Bulls on Jan. 25.

LOS ANGELES - The news of the helicopter crash that killed Kobe Bryant, his daughter Gianna and seven others sent shockwaves through the sports world and beyond. Following Bryant's shocking death, tributes poured in from athletes and entertainers across the world as many adored, befriended and respected the Los Angeles Lakers legend.

As Tuesday marks the one-year anniversary of the deadly crash, FOX 11 looked into the recent tributes from the sports and entertainment world:

Music legend Snoop Dogg recently spoke about his favorite memory with Bryant during an interview with Watch What Happens Live with Andy Cohen. Snoop Dogg told Cohen how he got to spend a day with Bryant and the Long Beach native felt "like a little kid just thinking about it."

"I picked him up in my lowrider and brought him back to my studio and when he left, I gave him the lowrider," Snoop Dogg told Cohen.

As the 2020 NBA All-Star Game in Chicago tipped off just days after the horrific helicopter crash, the Compton native produced a video package honoring Bryant. The video, aired during the telecast of the all-star game, highlighted Bryant's decorated career and legacy.

Laker Nation knows both actor O'Shea Jackson Jr. and his hip-hop-legend-turned-Hollywood-star dad, Ice Cube, are diehard fans of the Purple and Gold. For years, Ice Cube would be spotted wearing Lakers gear at Staples Center and The Forum and delivered the famous line, "The Lakers beat the Supersonics" in his 1990s hit, "It was a good day." His son has also never been shy about his love for the Lakers, whether it's on social media talking trash to Clippers fans or when he put together a tribute to the 2020 NBA champions on TNT. 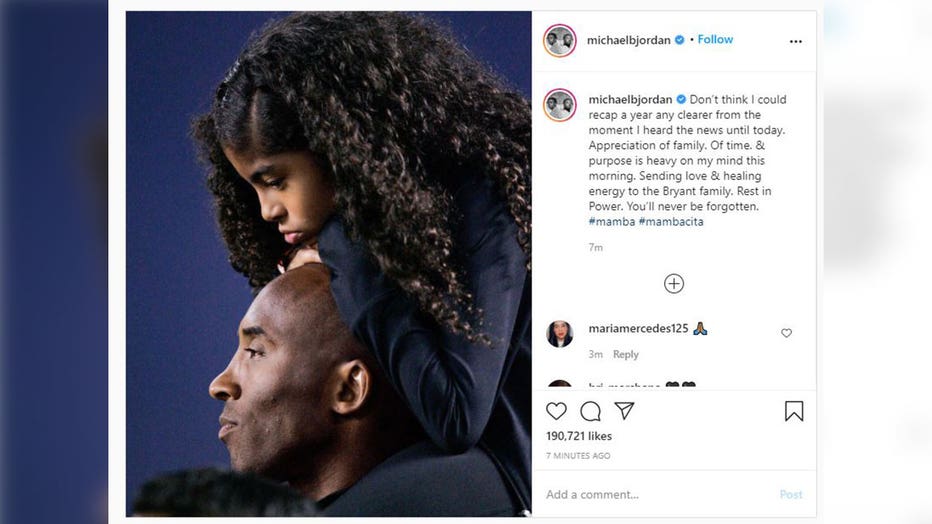 Shortly after the deadly plane crash, DiCaprio took to social media to call the Lakers legend "larger than life." He added that "LA will never be the same," following Bryant's tragic death.

Shaquille O'Neal, the other half of the legendary Lakers duo in the early 2000s, has never been shy about discussing his complex relationship with his former running mate. Following Bryant's death, O'Neal has been equally vocal about his desire to honor his friend's legacy. During an interview with People, O'Neal said Bryant has inspired the big fella to reach out to his former teammates and stay in touch.

"He actually inspired me to reach out to loved ones I haven't talked to in a while," O'Neal told People.

He said he's now a part of a group text involving the early 2000s Lakers teammates. O'Neal adds it was something he should have done sooner following his retirement. 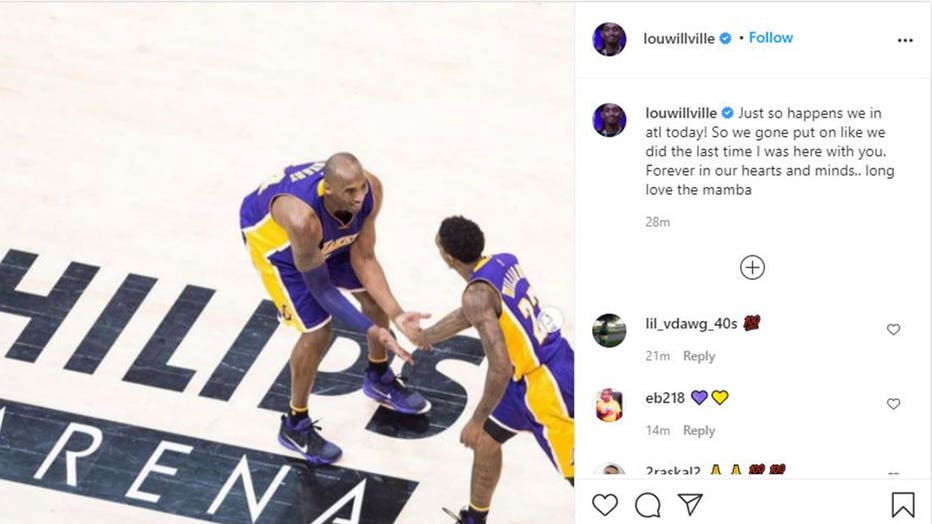 John Salley is remembered mostly for his time with the "Bad Boys" Detroit Pistons, but longtime NBA big man fondly remembers playing alongside a young Kobe Bryant during the Lakers 1999-2000 NBA title run.

During an interview with FOX 11's Christine Devine, he shared stories of watching game tape on VHS with Kobe and grabbing meals at TGI Fridays.

Like Salley, Metta World Peace didn't spend too much time with the Lakers in his decorated NBA career but the enigmatic forward's time in LA could not have been any more memorable. World Pace, known as Ron Artest at the time, helped the Lakers win their 16th NBA championship in 2010 after making a clutch three-pointer late in the fourth quarter to help LA outlast the Boston Celtics in Game 7.

However, his comments after the game were what captured the headlines.

"Kobe passed me the ball!" World Peace said after the game in 2010. "He never passes me the ball."

During an interview with FOX 11's Liz Habib, World Peace opened up about how Bryant reacted to the New York native's hilarious postgame comments.

"He can take a nice joke," World Peace said with a smile. "He thought it was funny."

World Peace told Habib he remembers the "Black Mamba" for his toughness, compassion and the impact he had on people.

"Being what I went through as a ball player, when you saw his facial expression after I hit the [three-pointer], it's actually really cool... It's like, 'man, my little brother did it,'" World Peace recalls during Game 7 of the 2010 NBA Finals.

World Peace also shared stories of the time he and Bryant grabbed dinner together and the one time he approached Bryant in the shower room moments after the Lakers' 2008 NBA Finals loss in his interview with Habib.

Tyronn Lue played three seasons alongside Bryant with the Lakers. Following the Laker legend's death, Lue reportedly said he tried to block out the memories as much as he could. But according to a report from ESPN's Ohm Youngmisuk, the Los Angeles Clippers head coach says he's looking to improve his coping mechanism by putting up pictures of him and Bryant.

"Still to this day, just tough," Lue told ESPN. "When you look and just watch clips when they are showing stuff from old games or commercials, it is just tough for me to see."

But now, Lue is slowly opening up to his players on what it was like playing alongside Bryant, ESPN reports. Lue said he's now sharing those stories to Clippers stars and SoCal natives Paul George and Kawhi Leonard, ESPN reports.

Other than the Team USA gold medal runs in 2008 and 2012, current Lakers star LeBron James never got a chance to play alongside Kobe Bryant or face each other in the NBA Finals. When asked over the weekend about Bryant's legacy, James spoke on the privilege and responsibility that comes with honoring the Black Mamba.

"Us being able to remember him, wear the [Black Mamba alternate] jerseys during the postseason, have the postseason success we had," James said in a Zoom press conference over the weekend. "We got a lot of guys that wear his shoes to this day and I'm able to wear '24' on my finger [band] every night."

"A lot of things that die in this world but legends never die," James adds in the Zoom press conference. "He's exactly that.

NBA superstar LeBron James reflected on Kobe Bryant one year after his death following the Lakers win over the Chicago Bulls on Jan. 25. 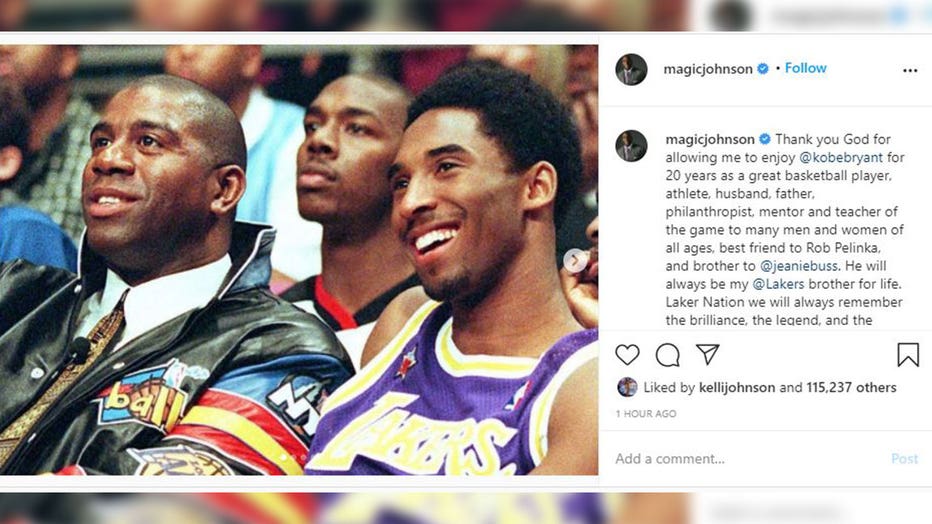 Prior to the Seattle Seahawks' game against the Los Angeles Rams in December 2020, Russell arrived at Lumen Field wearing a Kobe Bryant jersey. Following his team's regular-season victory at home, the NFL star posted an emotional video tribute on social media with the caption, "Dear Kobe and Gigi... Thanks for being an inspiration."

"When I think about this year, the first thing that comes to mind is No. 8, No. 24, No. 2," Wilson said in the video, referencing Kobe's two retired jersey numbers and Gigi's jersey number.

The talented point guard made headlines during Bryant's later years after playfully challenging the Lakers star for a game of one-on-one. The two became close friends over time and on Monday, Irving arrived at the Brooklyn Nets game wearing Bryant's No. 8 jersey.

Smith briefly played for the Lakers during the 2020 NBA title run but never played alongside Bryant. However, the two had their battles during Smith’s days with the New Orleans Hornets and Denver Nuggets in the late 2010s. Smith admitted on social media that he took those days for granted.

"Thought I was really going to play against you forever," he said, in part, on social media.

Over at Chavez Ravine, the Dodgers lined the third-base line during the national anthem wearing Kobe Bryant jerseys on August 23, which would have been the Lakers legend’s 42nd birthday.

Moments after the Dodgers won the World Series in October 2020, a group of fans led a "Kobe!" chant during the spontaneous street celebrations in downtown Los Angeles.

This is a developing story. Check back for updates.