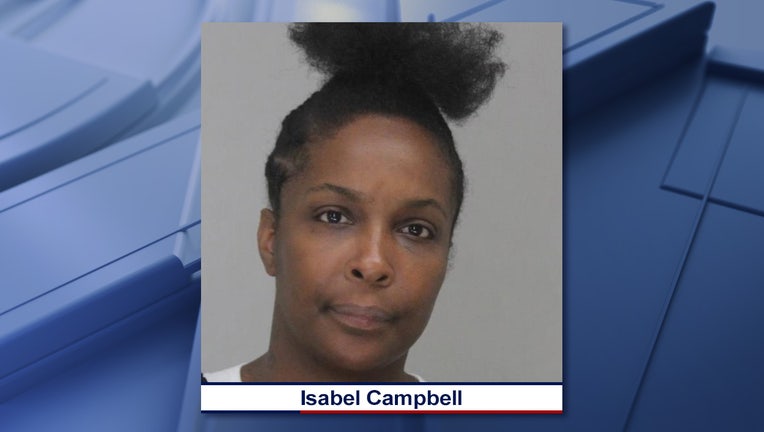 DALLAS - An 18-year-old woman has been arrested after Dallas police said she took part in the fatal shooting of a 22-year-old while stealing his catalytic converter last year.

Isabel Campbell has been charged with capital murder in the death of Sergio Maas back on December 1, 2021. She is being held on $2 million bond.

Maas lived in a third-floor apartment at the Spanish Village apartments on Sumter Drive, near Bachman Lake.

According to the arrest affidavit, police responded to the apartment just before 4 a.m. on Dec. 1 and found Maas in his living room with multiple gunshot wounds.

Investigators were told that Maas and another person heard what they believed to be drilling or a weed eater coming from the parking lot.

Maas then looked outside and saw people around his silver Toyota Sequoia. He then grabbed his keys, went to his balcony, and turned on his car alarm.

The other person in the apartment with Maas said they heard someone say, "die dog," followed by 3-5 gunshots, the affidavit states.

Maas was hit by the gunfire, and he fell back into the apartment. The other person called 911, but Maas was later pronounced dead at the scene.

Police found video evidence supporting what they were told. They also found that Maas’ car had not been broken into, but the catalytic converter had been cut out.

While investigating another case, DPD Gang Unit officers were conducting an operation and took three men into custody.

After searching a home two of the men were seen at, investigators reported finding shell casings in the backyard that matched those used in the fatal shooting of Maas.

After getting information back from one of the suspect’s cell phone warrant, it showed an email from Campbell’s account with an image and headline of "Man shot and killed confronting group from his balcony at Spanish Village Apartments."

The affidavit states that along with that, she messaged "WTF…I hope that wasn’t us omfg," and "Bruh omg I think it is."

Police said there were also photos on the phone of catalytic converters that were taken an hour and 15 minutes after Maas was killed.

In June, the man whose phone they searched was arrested unlawful carrying of a weapon, and Campbell, who was with him, voluntarily went to police headquarters for an interview, according to police.

According to the affidavit, she initially said she didn’t know anything about Maas’ murder, but when asked about her emails, she then said she didn’t want to speak with police anymore.

After a search warrant of her cell phone data, it showed that she was at the crime scene and "in the immediate area at the time of the offense," according to the affidavit.

She was charged and arrested, as police believe she was an "active participant" in the crime that led to Maas’ death.