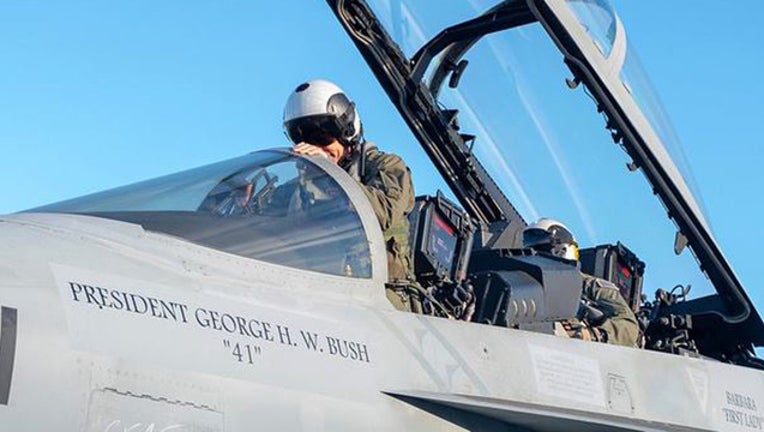 HOUSTON (FOX 26) - Former President George H.W. Bush will be honored with a special military flyover at his funeral service today.

They will perform an unprecedented 21-fighter flyover for the ceremony.

The lead jet, flown by Capt. Kevin “Proton” McLaughlin, has “President George H.W. Bush ‘41’” and Barbara's name on the side.

“To be even a small part of this ceremony means a lot to me,” McLaughlin told WTKR, adding he joined the Navy when Bush was president.

The missing man flyover – a high honor bestowed by the military – “is a symbolic final farewell to a great man who left a tremendous legacy of selfless service to his nation and his family,” he told WVEC-TV.

Former President George H.W. Bush will be buried after a funeral service at St. Martin's Episcopal Church, the church he attended for many years, and a special memorial train that will carry his casket.

The train is scheduled to arrive in College Station just before 3:30 p.m. CST.

The Bush family will be taken to the presidential library, where Navy planes will fly over in a "missing man" formation Thursday evening.

Bush was a Navy pilot who was shot down during World War II.