Police are looking for burglars who opened fire in a Pleasant Grove neighborhood over the weekend.

DALLAS - Police are looking for burglars who opened fire in a Pleasant Grove neighborhood over the weekend.

The gunfire started after neighbors heard the burglars breaking into a home and tried to confront them. But the burglars were determined to stop anyone who got in their way.

The family wasn’t home Saturday when the burglary took place, but they watched it play out live through their camera system on their cell phones. 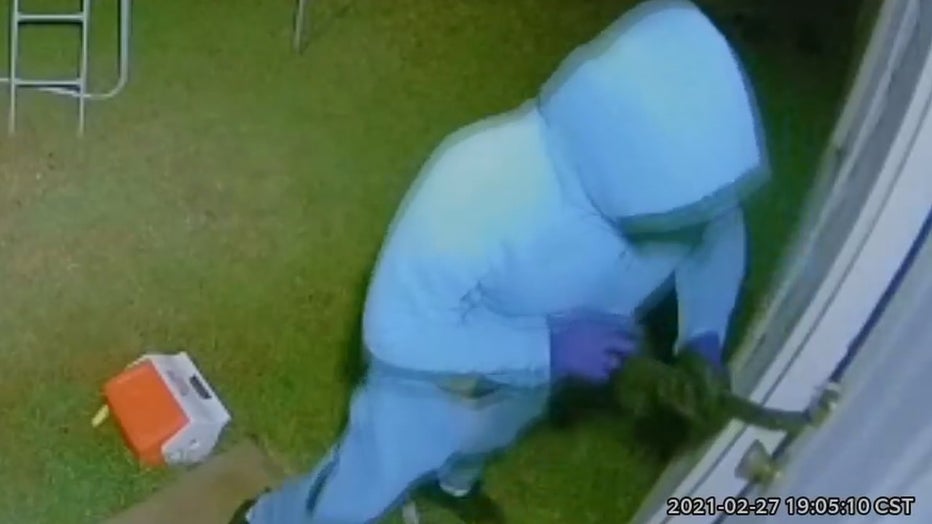 Bullets bounced through the 1300 block of Briercrest Drive Saturday night.

It was caught on camera at Idalia Rodriguez’s home that was being burglarized. The family would've been home had they not gone to dinner.

"About 7:06, there’s a guy at the backdoor. He's trying to get in," she recalled. "Our cameras have already alerted us. By the time we are trying to get ahold of Dallas police, they're already in the house."

Sirens wailed as the burglar went room-to-room flipping lights, looking for goods and grabbing what he could in four minutes.

"They actually took a PlayStation, a MacBook Pro, some of my husband’s guns," Rodriguez said. "The most thing that actually mattered the most was a safe that they took. That actually had a bunch of my kids’ little memories since they were like babies."

At least two others were waiting outside. They were locked in because the front door was dead-bolted.

A second guy ran to the front door to pry it open, ripping out the doorbell camera.

"My neighbor hears somebody kicking the gate, and he knows we're not home," Rodriguez said. "He's trying to basically just yell at them, ‘Hey! What are y’all doing there!’ And next thing you know, there’s a guy that’s closer to the street, and he starts shooting directly at the neighbor."

Cameras captured a man leaving with the family’s stuff. A neighbor yelled. The response is profanity-laced peppered with gunfire. It shattered windows and left bullet holes in vehicles that were parked along the street.

"We're blessed that nobody was hurt. My neighbor, everything was okay with him," Rodriguez said. "And it’s just something where you don’t feel safe here no more."

Home burglaries are not unusual in Dallas, but what is unusual is when it happened at 7:00 p.m. and scary how quickly burglars began shooting at someone they couldn’t see.