Bullying complaints at Joshua ISD prompt protests at board meeting

JOSHUA, Texas - Dozens of parents, kids and others protested Joshua ISD over claims of bullying.

The group says the district isn't doing enough to stop what they call rampant bullying.

The district sent a letter to parents explaining what's considered bullying and promised a meeting for parents in the future.

There was a meeting Thursday about staffing, but parents and students protesting were there for a different reason.

Joshua ISD parents frustrated and on the brink of tears described what they call ongoing bullying issues they say their children have faced at school. 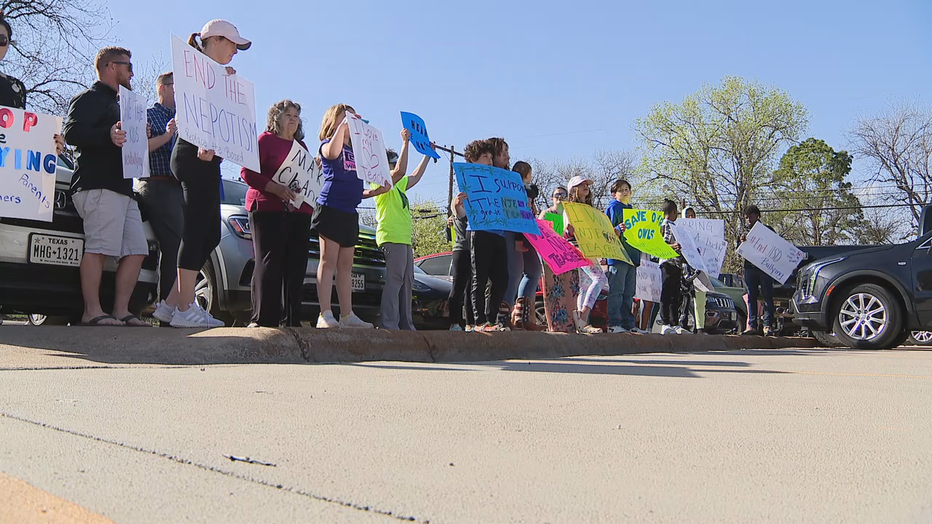 They are ramming him in the hallway," said parent Arredondo.

"A busted eardrum, choking, slamming heads into lockers," said parent Terrie, who asked that FOX 4 not use her last name,

On Thursday, roughly 50 parents and students showed up to voice their concerns outside of a closed special meeting unrelated to bullying.

Some parents declined to speak on camera in fear of retaliation against their children.

"It’s got to stop. These children need help in this district. They need help," Arredondo said.

Last week, the district sent out a lengthy response to parents detailing how to report bullying incidents and how the district investigates those incidents.

It also explains the state’s definition of bullying as "a single significant act or pattern of acts directed at another student with written or verbal expression or physical conduct that will have the effect of physically harming a student property or placing a student in reasonable fear of harm."

Terrie feels her complaints have fallen on deaf ears.

A district spokesperson says in two weeks it plans to send out an open-ended bullying survey to parents asking for feedback on what their children have experienced.

The protesters packed the school board chamber at the start of the special meeting, which adjourned to a closed session just moments after the start.

Joshua ISD Superintendent Fran Marek did not address the crowd.

Arredondo says she’s disheartened at the district’s response so far after moving to Johnson County five years ago with the sole purpose of joining Joshua ISD.

"To come here and to start experiencing this, it’s heartbreaking," she said. "And we’re not going to stop fighting for these students. We’re not. Until change happens."

The parents presented an action list, including an anti-bullying safety committee, monthly seminars and more training for staff among other things.

The district says it has plans to organize a workshop on bullying that it had previously offered but discontinued because parents weren’t showing up.