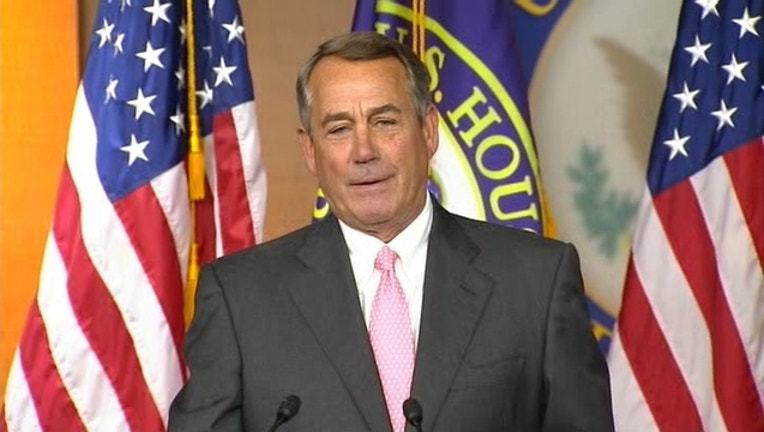 WASHINGTON (AP) — Speaker John Boehner says he's determined to clean up some of the mess of a politically gridlocked Congress in his final month before his successor takes over the House.

The Ohio Republican says a spending bill to keep the government running will pass and there will be no shutdown when money runs out at midnight Wednesday. Beyond that, he said on CBS's "Face the Nation" Sunday he expects "I might have a little more cooperation from some around town to try to get as much finished as possible."

"I don't want to leave my successor a dirty barn," he said. Among issues still to be settled: a transportation bill, tax breaks and whether to raise the government's debt limit.

The interview was Boehner's first after announcing Friday that he would resign from Congress at the end of October. The timing, he said, was clarified after spending the day with Pope Francis and designed to help avert a government shutdown. But even as he looked forward, Boehner harked back to the faction of his party that he ultimately could not control.

Boehner unloaded against conservatives long outraged that even with control of both houses of Congress, Republicans have not succeeded on key agenda items, such as repealing President Barack Obama's health care law and striking taxpayer funding from Planned Parenthood. He refused to back down from calling one of the tea party-styled leaders, presidential candidate and Sen. Ted Cruz, a "jackass."

"Absolutely they're unrealistic," Boehner said. "The Bible says, 'Beware of false prophets.' And there are people out there spreading noise about how much can get done."

Boehner's resignation announcement Friday stunned Washington but was long in the making after years of turmoil with the same House conservatives who propelled the GOP into the House majority on a tea party-style, cut-it-or-shut it platform. Without Boehner, the job of leading divided congressional Republicans falls more heavily on Senate Majority Leader Mitch McConnell — who declared nearly a year ago that the GOP's prospects of reclaiming the White House depends substantially on showing the party can govern.

McConnell is also a target of some rebellious conservatives. But Senate veteran John McCain, R-Ariz., said Monday the overwhelming majority of his colleagues would oppose ousting McConnell. "There's no chance of that happening," McCain told MSNBC.

Rep. Tom Cole of Oklahoma, a longtime Boehner ally in the Republican leadership, said those clamoring for another shutdown this week or later this year would jeopardize the party's chances of winning the presidency.

"We have the very same people who led us to disaster in 2013 telling us to do the same thing," Cole said Monday on MSNBC. "Government shutdowns never work."

Boehner's resignation announcement rippled through the slate of 2016 presidential candidates competing for support among the GOP's core Republicans. As Boehner let out the word to House Republicans Friday morning, GOP presidential hopeful Sen. Marco Rubio relayed the news to a conference of conservatives — who erupted in triumphant hoots. Rubio, retired neurosurgeon Ben Carson and former Hewlett Packard CEO Carly Fiorina were among the GOP candidates who said Boehner's departure showed it was time for the party to move on.

Fiorina suggested that McConnell's leadership, too, has been unsatisfactory.

"I hope now that we will move on and have leadership in both the House and the Senate that will produce results," Fiorina said on NBC's "Meet the Press."

"I think people are going to miss him in the long run, because he's a person that is focused on solving problems," Bush said on "Fox News Sunday."

Ohio Gov. John Kasich, a former member of Congress and a 2016 presidential candidate, said of the politicians complaining that nothing is getting done: "Maybe they ought to look in the mirror."

"What have they accomplished?" he said. "I mean are they just speechmakers? Are they just people out there yelling and screaming?"

Boehner's resignation announcement came as congressional Republicans faced a familiar standoff in their own ranks over whether to insist on their demands in exchange for passage of a federal budget — the same dynamic that led to the partial government shutdown of 2013. For nearly a year, McConnell, now the Senate's Republican majority leader, has insisted there would be no repeat, even as conservatives dug in.