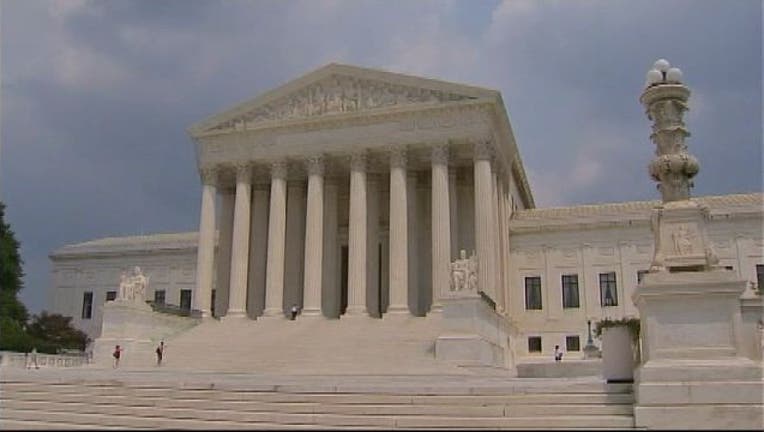 WASHINGTON (AP) - The moment conservatives have dreamed about for decades has arrived with Brett Kavanaugh joining the Supreme Court. But with it comes the shadow of a bitter confirmation fight that is likely to hang over the court as it takes on divisive issues, especially those dealing with politics and women's rights.

With Kavanaugh taking the place of the more moderate Anthony Kennedy, conservatives should have a working majority of five justices to restrict abortion rights, limit the use of race in college admissions and rein in federal regulators.

The newly constituted court also might broaden gun rights, further relax campaign finance laws and halt the expansion of the rights of LGBT people, who three years ago won the right to marry nationwide with Kennedy in the majority.

Yet Kavanaugh may have a hard time putting behind him the tumultuous confirmation process, which ended with the Senate voting 50-48 to confirm him Saturday, the narrowest margin of victory for a Supreme Court nominee in 137 years.

"In the public mind, there will always be this dark cloud hanging over the court, even if Kavanaugh is eventually embraced by all his colleagues on the court," said Elizabeth Wydra, president of the liberal Constitutional Accountability Center.

That cloud stems from allegations of sexual assault and other inappropriate behavior by Kavanaugh while he was in high school and college, along with his politically charged testimony that labeled the look into his past a political hit job by Democrats.

Kavanaugh has forcefully denied any inappropriate behavior with women. He also acknowledged in a Wall Street Journal column that some of his testimony went too far, but did not apologize for anything he said.

The bitter partisan fight over the confirmation could continue in another form if Democrats take control of the House after the November elections. Key House Democrats have said they would investigate Kavanaugh.

In the meantime, the focus will be on the court's new majority's willingness to take on controversial issues.

A potential early test is two cases involving state efforts to strip public money from Planned Parenthood. The justices are considering appeals from Kansas and Louisiana. Lower courts have blocked the states from going forward. The court could announce Tuesday that it has rejected the appeals, if the justices voted that way in their private conference Friday. But they also could defer action to allow Kavanaugh to weigh in.

It is far from certain that the court will move precipitously on this or any high-profile issue. "It's not going to be lost on anyone on the court that everybody is going to be watching the new court to see which issues they engage in," said Paul Clement, solicitor general under President George W. Bush.

The justices could look for cases that are more likely to produce consensus, including those about privacy protections in the digital age, Clement said.

Some contentious issues, though, will be harder to avoid because federal law compels the court's involvement. In coming months, the issue of drawing political districts for partisan advantage will return to the court in a case from North Carolina. Last term, the justices failed to set limits on the practice known as partisan gerrymandering in cases from Maryland and Wisconsin. Kennedy was seen as the conservative justice most likely to side with liberals on the issue. His retirement dimmed the hopes of proponents of such limits.

New state restrictions on abortion could make their way to the Supreme Court soon, along with challenges to the Affordable Care Act and protection from deportation for young immigrants.

The leader of an anti-abortion group that supported Kavanaugh foreshadowed the fight to come in a statement issued just after the confirmation vote.

"Judge Kavanaugh's distinguished judicial career has been built upon his constitutionalist approach to law, and we trust that this will serve all Americans well when Roe v. Wade inevitably comes before the Supreme Court for review," said Catherine Glenn Foster, president of Americans United for Life, referring to the court's landmark 1973 abortion rights ruling.

Kavanaugh's arrival on the court after the most tumultuous confirmation battle since Clarence Thomas faced allegations of sexual harassment by Anita Hill in 1991 hardens the alignment of party and ideology: five conservatives appointed by Republican presidents and four liberals by Democrats. That was true with Kennedy on the bench, but he voted with the liberals in cases that preserved abortion rights and affirmative action, expanded LGBT rights and limited capital punishment.

Two of those liberal justices, speaking Friday at Princeton University, talked about the court's legitimacy, without mentioning their new colleague.

"Every single one of us needs to realize how precious the court's legitimacy is. You know we don't have an army. We don't have any money. The only way we can get people to do what we think they should do is because people respect us," Justice Elena Kagan said.

Justice Sonia Sotomayor said the nine justices recognize the small world they inhabit, suggesting that the tense atmosphere surrounding Kavanaugh's nomination is unlikely to be replicated on the court.

"We have to rise above partisanship in our personal relationships. We have to treat each with respect and dignity and a sense of amicability that the rest of the world doesn't always share," Sotomayor said.

Chief Justice John Roberts has been especially sensitive to portrayals of the court as a political institution. That perception has waxed and waned over the years, but it was particularly strong following the Bush v. Gore decision that sealed Bush's 2000 election.

On a practical level, the four liberal justices need a vote from the right side of the court in which they otherwise divide on the familiar ideological fault lines. Kennedy and Sandra Day O'Connor were justices "who found the center," Kagan said, "and that's enabled the court to look as though it was not owned by one side of the other. It's not so clear that you know going forward that that sort of middle position - it's not so clear whether we'll have it."

In stressing Kavanaugh's frequent agreement with Judge Merrick Garland on the federal appeals court in Washington, the new justice's backers seem to be suggesting that Kavanaugh's vote cannot be taken for granted.

But the more widely held expectation among court watchers is that Roberts, who joined with the liberal justices to uphold President Barack Obama's health care overhaul, will determine how far and fast the court moves. "You might think of him as the swing vote, but it's less that he will be up in the air in various cases. But he will be important in determining which cases the court takes, how quickly they move and how they decide cases," Clement said.

For Wydra, the new role for Roberts underscores the court's shift to the right. "I guess he is now the new center, which is rather frightening considering how conservative he is," she said.

More reporting on the Supreme Court and Kavanaugh can be found at: http://apne.ws/IHcZXad