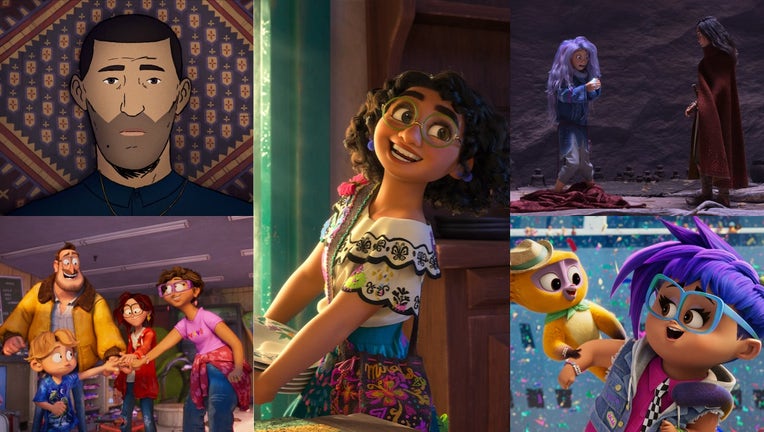 CHICAGO - Animated movies exist both to comfort us and challenge us — sometimes at the same time.

Despite the hurdles of the pandemic, 2021 delivered a great slate of animated features aimed at children and adults alike. Animation powerhouses like Disney and Pixar released hits like "Encanto" (arriving soon on Disney+, and in theaters now) and "Luca" (streaming on Disney+). Meanwhile, Sony Pictures Animation (home of the beloved "Spider-Verse" franchise) gave us "Vivo" and continued to push animation forward with its innovative sci-fi family comedy, "The Mitchells vs. the Machines."

And while lighthearted animated flicks likely got many families through the tough times this year, mature films like "Flee" and "The Summit of the Gods" once again proved that animation isn’t just for kids.

Here, in no particular order, are the animated movies that defined 2021. 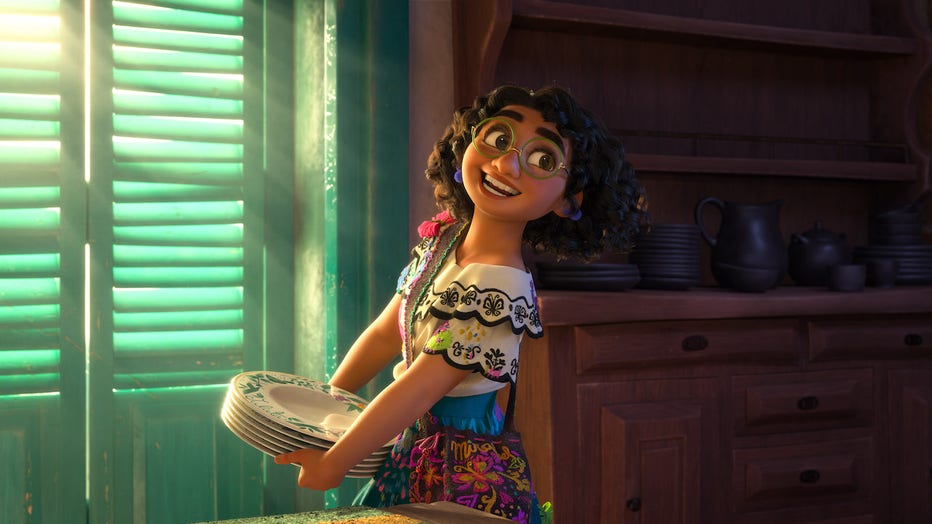 Mirabel Madrigal struggles to fit in a family where everyone has been blessed with magical powers - everyone but her. Determined to prove she belongs within this extraordinary family, she strives to contribute in meaningful ways—denying to everyone,

While most 2021 family films understandably made their debuts on streaming platforms, "Encanto" aimed to welcome families back to the megaplex with a theatrical-only release. Set in a magical village in Colombia, this lushly animated flick follows the one non-magical member of a family blessed with superhuman abilities. Featuring toe-tapping songs by Lin-Manuel Miranda and a story that evokes the South American tradition of magical realism, "Encanto" expands the grand Disney tradition to include a whole new kind of family. Rated PG. 109 minutes. Dir: Jared Bush, Byron Howard. Featuring the voices of: Stephanie Beatriz, María Cecilia Botero, John Leguizamo, Mauro Castillo, Wilmer Valderrama, Alan Tudyk. 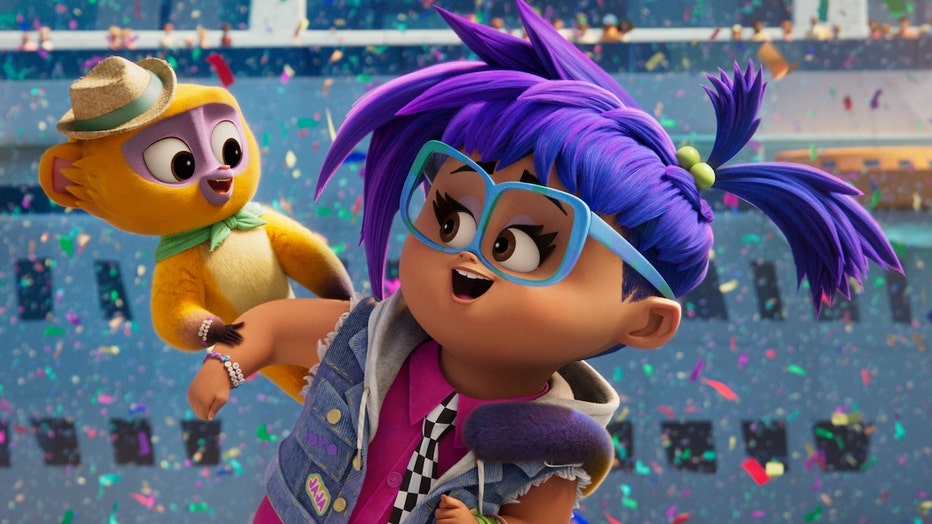 In case Lin-Manuel Miranda didn’t have enough on his plate in 2021 — the year he produced "In The Heights," directed "Tick, Tick... Boom!," and wrote the songs for Disney’s "Encanto" — he also played a major role in this charming Sony Pictures animated flick too. Miranda voices Vivo, a music-loving monkey from Cuba who somewhat reluctantly finds himself on a wacky adventure with a free-spirited young girl named Gabi (Ynairaly Simo). With both goofy humor and heartfelt storytelling, "Vivo" is a bit of an underrated gem when it comes to 2021 family films. Oh, and did we mention that Miranda wrote the movie’s catchy songs too? Rated PG. 95 minutes. Dir: Kirk DeMicco. Also featuring the voices of: Zoe Saldana, Brian Tyree Henry, Gloria Estefan, Michael Rooker and Nicole Byer.

WHERE TO WATCH: Streaming on Netflix. 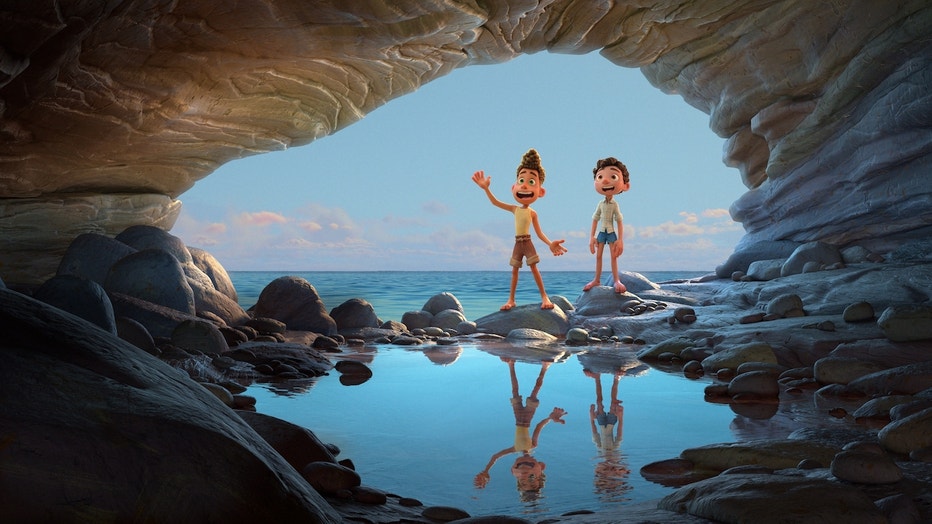 Perhaps the sweetest, gentlest film Pixar has ever made, "Luca" is a nostalgic story of friendship set in the lush Italian Riviera. Desperate for adventure, young sea monsters Luca (Jacob Tremblay) and Alberto (Jack Dylan Grazer) disguise themselves as humans and form a makeshift family with spunky Giulia (Emma Berman) and her gruff dad Massimo (Marco Barricelli). This story of outsiders trying to fit in can be read any number of ways. And "Luca" serves as a welcome reminder about the courage it takes to face your fears and tell them, "Silenzio Bruno!" Rated PG. 95 minutes. Dir: Enrico Casarosa. Also featuring the voices of: Maya Rudolph, Jim Gaffigan, Peter Sohn, Sacha Baron Cohen.

WHERE TO WATCH: Streaming on Disney+ and VOD. 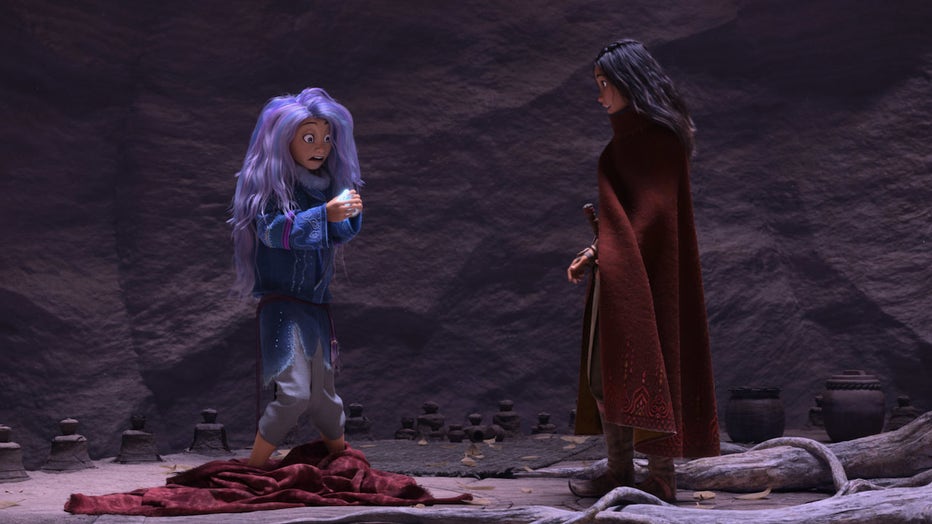 A different kind of Disney princess flick, "Raya and the Last Dragon" pulls from the action-adventure genre, rather than the classic musical template. The story of a young warrior princess named Raya (Kelly Marie Tran) trying to revive a broken world felt especially poignantly in the early days of 2021. With fantasy worldbuilding drawn from traditional Southeast Asian cultures and a great voice performance from Awkwafina as an insecure dragon, "Raya" brings viewers to a whole new world — even if they’re watching from the comfort of their own homes. Rated PG. Runtime 107 minutes. Dir: Don Hall, Carlos López Estrada. Also featuring the voices of: Gemma Chan, Daniel Dae Kim, Benedict Wong, Sandra Oh, Lucille Soong, Alan Tudyk.

WHERE TO WATCH: Streaming on Disney+ and VOD. 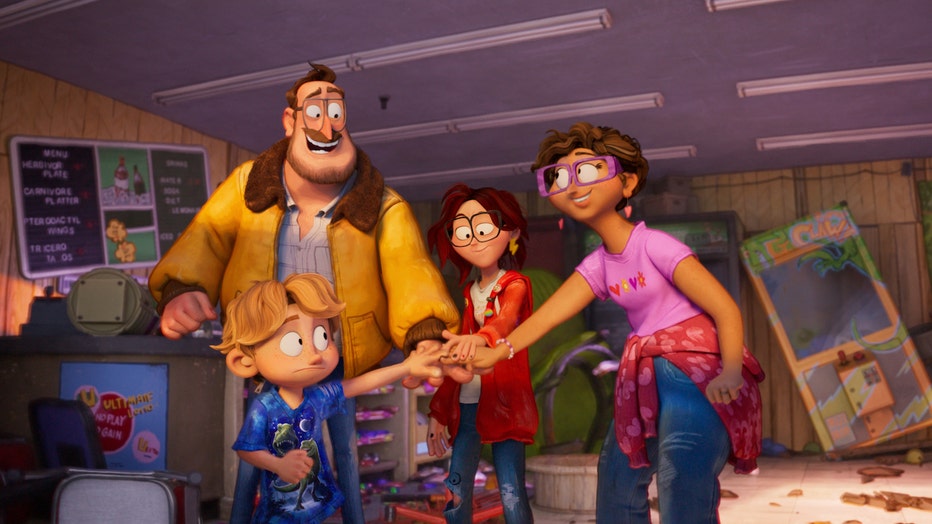 Oh, the Mitchells. Producers Phil Miller and Christopher Lord ("Spider-Man: Into the Spider-Verse") dropped a lovable yet seriously dysfunctional family right into a robot apocalypse, and in "The Mitchells vs. the Machines," Katie Mitchell (Abbi Jacobson) and company more than rose to the occasion. Co-writers Mike Rianda and Jeff Rowe blend pathos and humor as nimbly as the film's several animation styles, creating a treat for the eyes, ears (courtesy of Mark Mothersbaugh's excellent score) and heart. Oh, and it just might make you think twice about welcoming Siri and Alexa into your home, courtesy of a deliciously deranged vocal performance from Oscar winner Olivia Colman. Rated PG. Runtime 110. Dir. Mike Rianda. Featuring the voices of: Abbi Jacobson, Danny McBride, Maya Rudolph, Eric André, Olivia Colman, Fred Armisen, Beck Bennett.

WHERE TO WATCH: Streaming on Netflix; available on VOD starting Dec. 14. 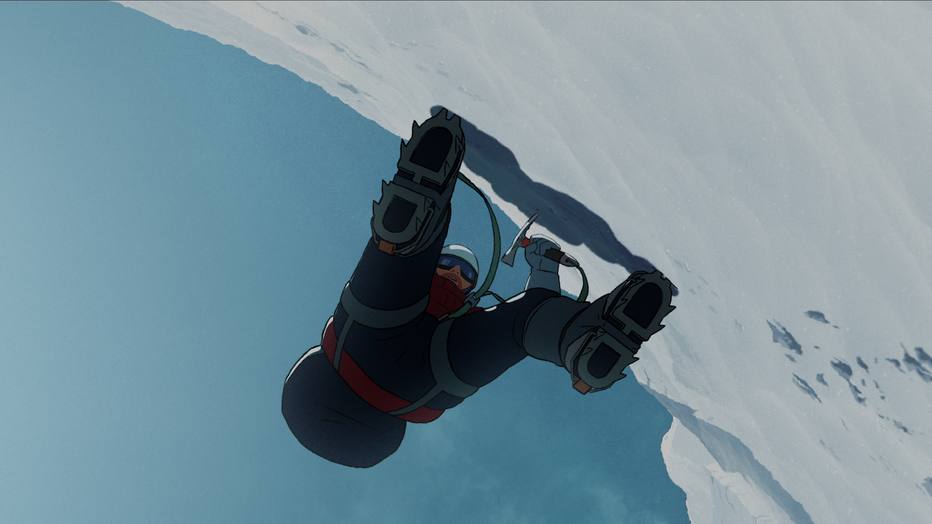 "The Summit of the Gods." Photo: Netflix.

The final two entries on our list are somewhat less kid-friendly — though that doesn't mean kids absolutely shouldn't see them, only that a grown-up may want to give "The Summit of the Gods" a look before calling the whole family to the couch. This adaptation of Jiro Taniguchi and Baku Yumemakura's manga series of the same name uses a deceptively simple animation style to tell a story of obsession, determination, the fragility of life and the beautiful wildness of the world, following — in dueling timelines — a photographer in pursuit of a once-in-a-lifetime find and a climber determined to become the best mountaineer in the world entirely on his own. Rarely has the sight of a straining rope created so much tension, or have grief and awe been so perfectly intermingled. Rated PG. 90 minutes. Dir: Patrick Imbert.

WHERE TO WATCH: In limited theaters and streaming on Netflix. 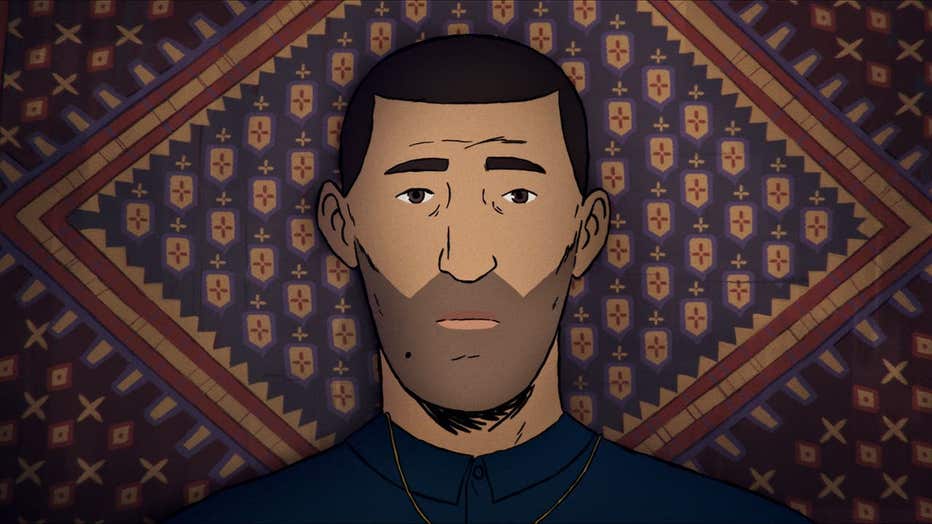 Deceptively simple and profoundly moving, "Flee" uses animation not to defy the laws of physics or to make cute animals talk, but to help someone draw back the curtain they've kept draped over a heartbreaking secret for decades. In Jonas Poher Rasmussen's deeply empathetic documentary, the grown-up Amin Nawabi recounts his childhood flight from Afghanistan, his life as a refugee and the wrenching sacrifices made by himself and his family to give him a chance at a safe and whole life. Not to be missed. Rated PG-13. 90 minutes. Directed by Jonas Poher Rasmussen; written by Rasmussen and Amin Nawabi, the subject of the documentary.

WHERE TO WATCH: In theaters now.

Our critics pick the best of the year 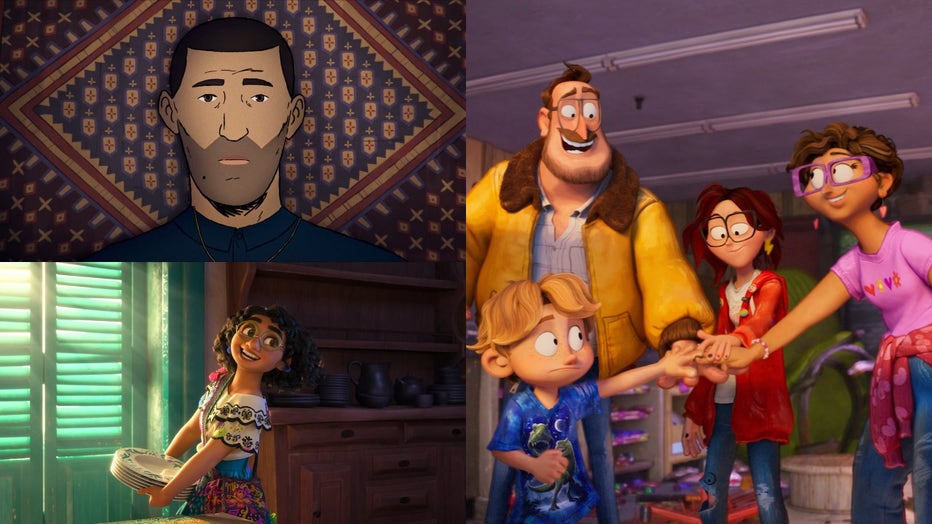 Allison Shoemaker’s pick: "Flee" and "Encanto." This was a year of animated gems, but "Flee" is so different from everything else that picking it and something else doesn't feel like cheating. (It is definitely cheating.) While in most respects this humane, heartbreaking documentary has little in common with "Encanto" — no singing in "Flee," for one thing — both are rich in empathy and deeply aware of the ways in which trauma and grief can resonate across generations. Despite that gloomy sentence, they're both ultimately hopeful, too. (And "Welcome to the Family Madrigal" is a bop.)

Caroline Siede’s pick: "The Mitchells vs. the Machines." Pretty much everything about "The Mitchells vs. the Machines" works, from its gonzo sci-fi comedy tone to its wonderfully original animation style. (I haven’t stopped thinking about that Furby sequence all year.) But what really makes this movie sing is its thoughtful look at the kind of everyday father/daughter conflict you rarely see explored onscreen. It’s an emotional core that both grounds and elevates this delightfully over-the-top planet-saving adventure. 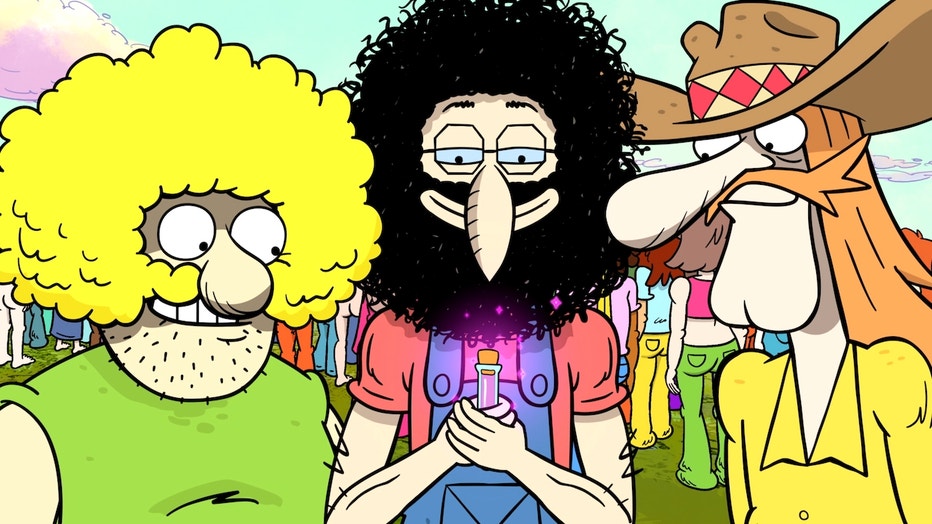 THE FREAK BROTHERS: After learning that the mystical Swami Bhajan holds the secret to the "ultimate high," Franklin, Phineas, Freddy, &amp; Kitty go to Woodstock to find him in the "Pilot" episode of THE FREAK BROTHERS, which begins streaming Nov

The Flintstones (1960): For another Hanna-Barbera treat, this Stone Age comedy is just as charming today as it was when it debuted during the tail end of the Eisenhower administration. Rated TV-G. Dir: Joseph Barbera and William Hanna. Featuring: Alan Reed, Mel Blanc, Jean Vander Pyl.

About the writer: Caroline Siede is a film and TV critic in Chicago, where the cold never bothers her anyway. A member of the Chicago Film Critics Association, she lovingly dissects the romantic comedy genre one film at a time in her ongoing column When Romance Met Comedy at The A.V. Club. She also co-hosts the movie podcast, Role Calling, and shares her pop culture opinions on Twitter (@carolinesiede).

About the writer: Allison Shoemaker is a Chicago-based pop-culture critic and journalist. She is the author of "How TV Can Make You Smarter," and a member of the Television Critics Association and the Chicago Film Critics Association. She is also a producer and co-host for the Podlander Presents network of podcasts. Find her on Twitter and Instagram at @allisonshoe. Allison is a Tomatometer-approved Top Critic on Rotten Tomatoes.