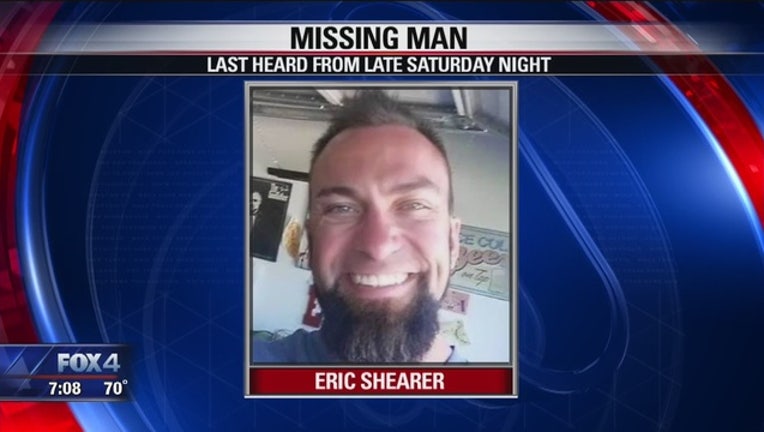 DALLAS - Family and friends will resume the search Thursday morning for a man from Balch Springs who has been missing since a car accident late Saturday night.

Eric Schearer was last heard from around 11:30 p.m. after the wreck on Interstate 20 near the Trinity River Bridge in Hutchins, in southeastern Dallas County.

Hutchins police said the 31-year-old was on his way home from a party in Mesquite, where he had been drinking. Witnesses saw him leave his vehicle after the crash. First responders found the vehicle, but couldn’t find him.

Schearer reportedly called his girlfriend and said he walked away from the wreck. He also told her he was hurt, scared and stuck in the mud, police said.

Police found some evidence that someone may have fallen from an embankment into the swift waters of the Trinity River, but couldn’t confirm that happened.

Texas Game Wardens used sonar equipment to search several miles along the river on Monday, but again didn’t find anything. Police called off the search Tuesday.

Family and friends said they’ll be out on their own Thursday looking for Schearer. They described him as a loving father, son, boyfriend and friend.