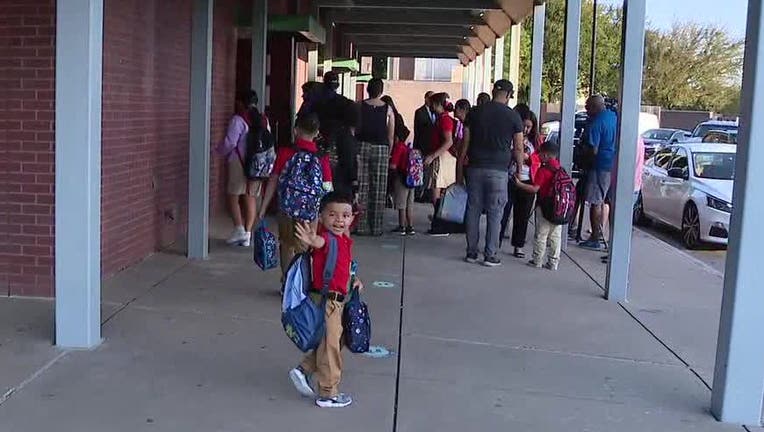 Students at Bethune Elementary School in Dallas head to class for their first day of school.

DALLAS - A majority of North Texas students went back to school on Monday.

It was the first day for 29 districts in North Texas including the Dallas, Fort Worth, Arlington, Grand Prairie and Rockwall school districts.

Most Dallas ISD students head back to school

Class is now underway for kids in the Dallas school district. The district's new superintendent said everyone's excited for a return to normalcy after a couple tough school years in the pandemic.

Over the past two weeks, the Dallas Independent School District started the year early on several dozen campuses.

Five campuses went back to school on Aug. 1 as part of Dallas ISD’s redesign schedule, which gives students an extra five weeks of instruction.

Aug. 8 marked the second first day of school for students at 41 intersession schools. Those campuses had an early start, and their school year is extended through late June.

Now, students at more than 180 schools are returning to class.

New Superintendent Dr. Stephanie Elizalde said teacher retention has been a huge focus for the district this year. Dallas ISD has filled more than 99% of its teaching positions and there are only 73 openings out of 10,000.

Dr. Elizalde attributes that in part to the increase in teacher pay.

"Our board of trustees passed a budget that included a starting salary for teachers of $60,000 plus a $2,000 incentive again with our district. It’s never enough but it’s still a pretty good starting salary. I don’t want to tell you what I made when I first started teaching. I know there were dinosaurs back then. But I think I made something like $15,723… but who remembers that salary?" she joked.

Elizalde helped welcomed the kids at Bethune Elementary School in west Oak Cliff, which is a top-rated campus in the district.

"We're very excited to welcome students and our community back. It's time for a sense of normalcy, and we're excited to start the new school year," said Principal Sandra Hernandez.

Security has also been a top priority for Dallas ISD. Thanks to a bond package from 2020, this year students will see keyless entry, improved classroom locking systems and video doorbells so teachers and administrators can see who is outside.

Fort Worth ISD hoping for ratings increase amid change in leadership

It's the first day of school in Fort Worth ISD

The Fort Worth Independent School District is ringing in the new school year Monday morning. FOX 4's Dan Godwin talks about what's new in the district.

About 75,000 students in the Fort Worth Independent School District also went back to school Monday morning.

Fort Worth ISD has a total of 140 schools and is an overall B-rated district, according to the accountability scores released by the Texas Education Agency.

The district said over the past five years, it’s been moving in the right direction. Administrators believe they’re on a path towards becoming an A-rated district.

But the district will undergo a big change soon. Dr. Kent Scribner will be stepping down in two weeks after serving as superintendent since 2015.

Scribner said there are some strong candidates still in the running for his replacement. There’s no word on when a replacement will be named.

Fort Worth ISD also has new start times for elementary, middle and high schools. Parents who have questions can call or text 817-500-0381.

There are new bus routes in the district as well. Anyone with questions should call 817-815-7900.

RELATED: Fort Worth ISD superintendent to resign in August

MORE: Here's the first day of school for every district in North Texas