Arlington police are still looking for the man who drove away from an officer during a traffic stop, then caused a crash that killed a father of three.

ARLINGTON, Texas - Arlington police are still looking for the man who drove away from an officer during a traffic stop, then caused a crash that killed a father of three.

Douglas Osiemo, 39, was killed on July 2 after 9 p.m. while driving for a food delivery service.

"Somebody dying from a road accident, something so sudden, your mind goes blank," said Gideon Ogoti, relative.

A car blew through the intersection at West Arkansas and Cooper Street at more than 100 miles an hour, police said, slamming into Osiemo’s car and shoving it partially under a box truck. Osiemo was pronounced dead at the scene.

Police says a man was seen casually walking away from the suspect vehicle and a second person may have been with him.

Prior to the crash in Arlington, police in the neighboring town of Pantego say one of their officers tried to pull the suspect over for a minor violation but the driver took off.

The Pantego officer ran lights and sirens pursuing the car for 32 seconds then terminated the chase after losing sight of the speeding vehicle. About a mile and a half away, after the suspect ran several red lights, was the violent crash that ended Osiemo’s life.

"We want to get closure and know really what happened," said Jeremiah Manduku, relative. 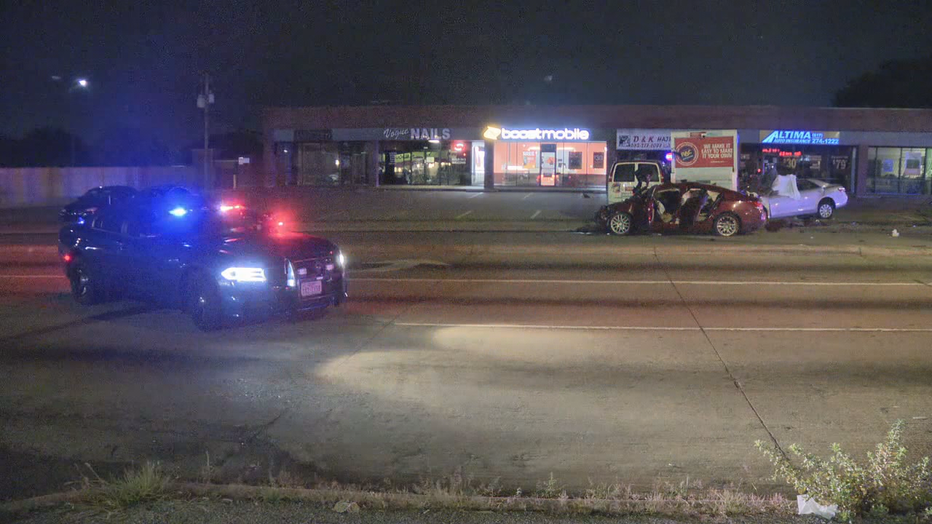 His family says they still have questions, but for now the local Kenyan community is raising money to send Osiemo’s body back to his homeland. That community is also worried for the future of the family he leaves behind.

Jackline Meraba and her husband, Osiemo, immigrated to Arlington from Kenya eight years ago. They have three children — 9, 5, and 1— who are now fatherless. Osiemo was the family’s sole provider and worked two jobs.

Investigators say they still need help identifying the person of interest and anyone with information should contact Arlington police.