Arlington ISD took another step in a massive effort to rebuild its aging schools.

ARLINGTON, Texas - Arlington ISD took another step in a massive effort to rebuild its aging schools.

Voters approved more than $1.6 billion in bonds in the span of five years.

With shovels in hand, the Arlington ISD board of trustees and superintendent broke ground on a much-needed new school Wednesday. 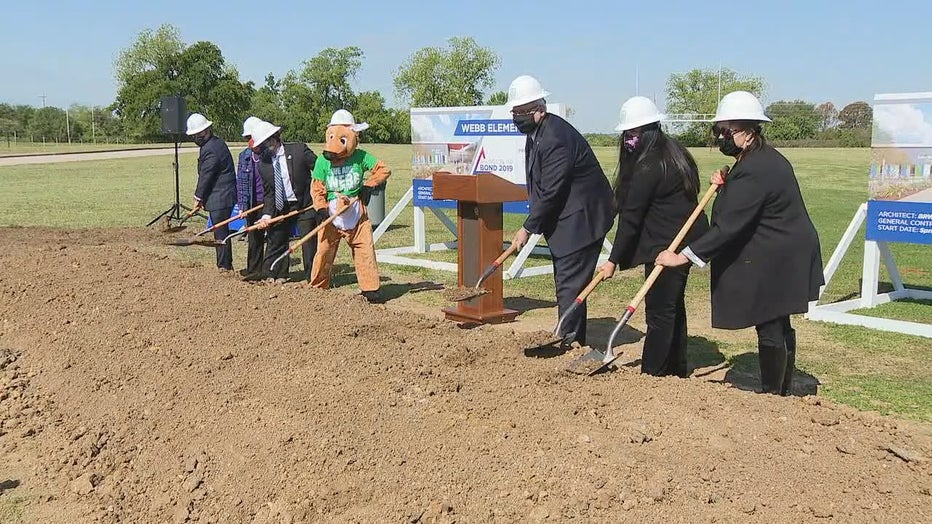 "The temperature is just right for this groundbreaking here at Webb Elementary," said Kecia Mays, Arlington ISD Board of Trustees President.

In 2019, voters approved a $966 million bond package that did not result in a tax increase. It’s the second large bond package for schools in five years.

The bulk of the 2019 money will be used to rebuild deteriorating schools like Webb Elementary, which is more than 60 years old.

Renderings on display at the groundbreaking showed what the new state-of-the-art campus will look like, complete with modern science labs and technology centers.

"It's a historic event, a monumental day for our students, staff, and our entire community," said Webb Elementary School Principal Elena Lopez. "The school is what draws all of us together. It’s the core of our community."

The new Webb Elementary School is expected to be completed by fall 2022, but the work doesn't stop there.

Three other Arlington ISD schools will benefit from that multimillion-dollar bond project, including Barry Elementary School, which is falling apart.

Money from the bond package will also fund upgrades to school safety, improving security and adding surveillance cameras to all campuses.

Bond money will pay for upgrades to existing athletic facilities. Aging playgrounds will be replaced and made handicap accessible.

"It helps Arlington be a center and attraction for parents who want to send their kids to schools that are modern that the facilities have the resources," said Arlington ISD Superintendent Dr. Marcelo Cavazos.

"Gonna feel maybe a bit proud and also going to be pretty cool that I helped in designing," said student Hector Meza. "Pretty excited because I mean it's going to be a nice more modern area."