Some North Texas residents are fighting against a proposal by Oncor they say would dramatically disrupt their properties. The mayor says the transmission line would force a dozen people out of their homes, hurt the town's tree canopy and impact commercial development.

ARGYLE, Texas - Some North Texas residents are fighting against a proposal by Oncor they say would dramatically disrupt their properties.

The mayor of argyle says Oncor’s proposed 20-mile transmission line would have a devastating impact on the town and homeowners. He's urging the electric company to consider another option.

The mayor says the transmission line would force a dozen people out of their homes, hurt the town's tree canopy and impact commercial development.

The deadline for people to submit their comments about the proposal is Friday. 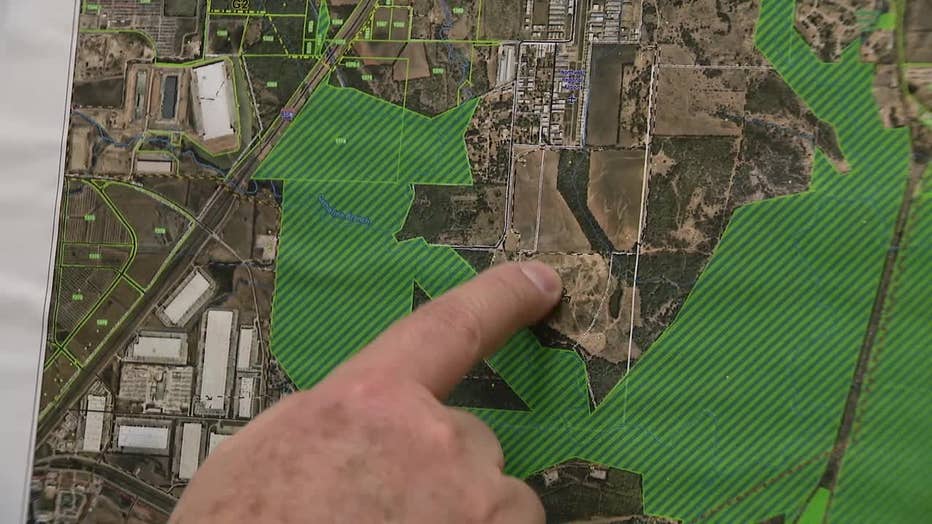 Carmelita Teeter-Lechowit showed us around her Argyle home that she's always dreamed of. But she says her property is right in the path of Oncor's proposed 20-mile-long, 130-foot-high single-pole transmission line. She almost missed the notification.

"I got a one-page mailer. It came over Thanksgiving. I just got in the pile," she said.

Teeter-Lechowit says her husband did some research.

"This tree, power lines would go there," she said. "The easement would go inside the home in that bedroom."

Oncor told FOX 4 in a statement that it will "submit several route options to the Public Utility Commission of Texas. The PUCT will decide the final route… While Oncor has the right of eminent domain as a public utility for the selected route, we will actively work with the directly affected landowners to negotiate the easements required for the transmission line."

Argyle Mayor Bryan Livingston showed us the proposed route to get energy from West Texas to North Texas. He says he and residents understand the Texas grid needs to be improved.

"But we think the process needs to be well thought out," he said. "And we think all stakeholders need to be at the table."

"These homes would be in the easement, and people would have to give up their homes," he said.

Livingston says it would also cut through a commercial development that’s important to the town all without appropriate notification.

"We were not formally notified at all," he said.

Mayor Livingston believes there is a better, more direct route that would cut through a small part of land where no one lives that’s overseen by the U.S. Army Corps of Engineers. It’s land that already has power lines now.

But the mayor says Oncor's response to the proposal was that the alternative route would be too costly and take too much time.

Livingston says cutting through Argyle's neighborhoods and losing hundreds of old growth cross-timbers is what should be seen as the more costly route.

"They are an irreplaceable natural asset," he said.

ERCOT has instructed Oncor to designate this project as critical to reliability. An Oncor spokesman says that designation helps the PUCT prioritize the project and condense the year-long process to six months.

The mayor has organized a meeting between Oncor, the Army Corps of Engineers and Congressman Michael Burgess for Thursday.

Friday is the deadline for people to submit their comments.